The source for shopping decisions, impulses, and inspiration
Photography by Noel Camardo
Anatomy of a Room

Summer Rayne Oakes’ pet hen, Kippee, may as well be a housecat. She laps up burrata from Oakes’ lunch plate, she hangs from her neck like a feline, she loves to be petted. She even bristles and clucks nervously at the travel crate that Oakes pulls out from behind a pot, a suggestion that Kippee may have to travel somewhere outside, thus leaving her cozy sanctuary. Why would Kippee ever want to leave? This is the most peaceful place in New York.

Oakes’ Williamsburg, Brooklyn apartment, where she’s lived for a little over 13 years, is more like a botanical garden than what typically comes to mind when you picture... literally any other New York City home. Oakes has spent her adult life working in the environmental space in some capacity: formerly she was a model for sustainable fashion and beauty brands, then she wrote two books—one on wellness and one on fashion—and now she runs a plant-keeping instructional YouTube channel called Plant One On Me. Her new book, out next year, is called How to Make a Plant Love You: Cultivating Your Personal Green Space.

Oakes’ apartment is a reflection of her life’s work. In 2016, a Modern Farmer blog post on Oakes’ plant-filed abode appeared with the headline “Meet a Woman Who Keeps 500 Plants in Her Brooklyn Apartment.” Her home and horticultural lifestyle immediately went viral.

“I had always been growing plants, but with the advent of this new media looking at other media and reporting on the same thing, it caught like wildfire,” she says. People couldn’t believe that, in New York City, someone could keep so much greenery alive and well. Most residents find they can barely get one or two plants to thrive in their cramped spaces. Over 500? Not a chance.

But Oakes just has that magical touch. And the number of plants in her apartment continues to grow. She estimates it’s upwards of 700 now. Her favorite kind of plant is the peperomia: “You'd never be able to collect all of them,” she told me, as Kippee climbed all over her. “There are so many different forms and different species. There could be a dark form, a light form, one with silver on it. And they're very easy to take care of.”

Though Oakes’ apartment doesn’t feel cramped, wouldn’t someone who was so interested in the natural world prefer to live in a more natural place? Wouldn’t Kippee like to make pals with some other hens? “I never thought I was going to be in the city for this long,” she says. “But I have a community here. I volunteer every single day of the week for the entire year. When you have a space that you feel you can call home and a community that you rely on, you realize that even though New York is super huge, it's big enough to make it what you want it to be.” 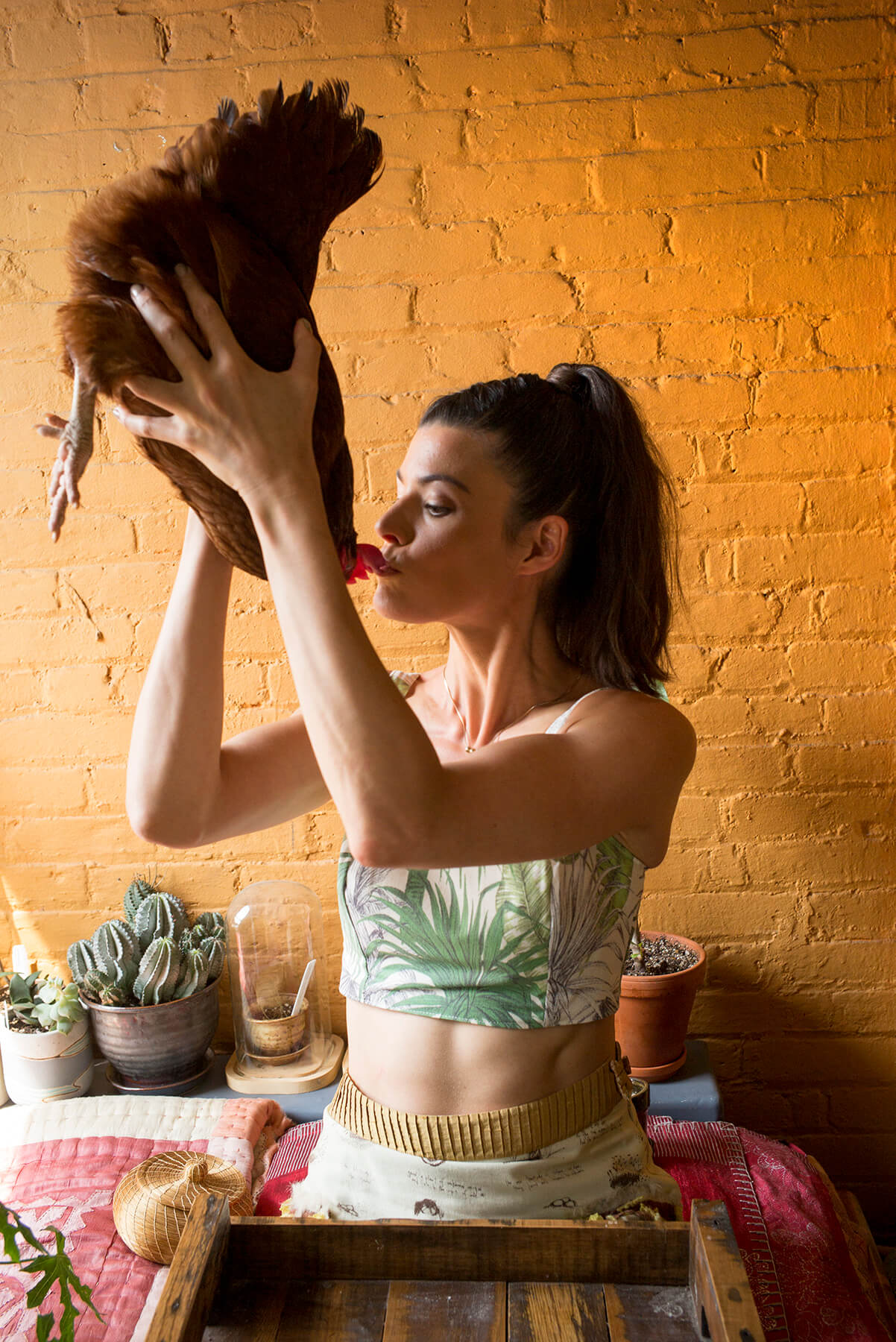 “I've had Kippee for a year and a half. She's my one and only pet because there's only so much I could manage, and she’s full on. Actually, we’re going to go out to a party tonight. It's at a restaurant so I have a bag that I put her in—it’s a bubble bag. She's so calm. Kippee also likes Pellegrino. She's very bougie. She has preferences. The chickens who are out in the coop, who aren't very people-ized, they'll eat anything. Kippee does not eat everything.”

“I love this Mason jar garden. It's just old wood that my dad brought in and some Mason jars and some hose clamps. I love it because it's kind of like living art. That's how I feel like a lot of the plants are here. They’re part of the decor but they’re actually living and so everything moves and changes.” 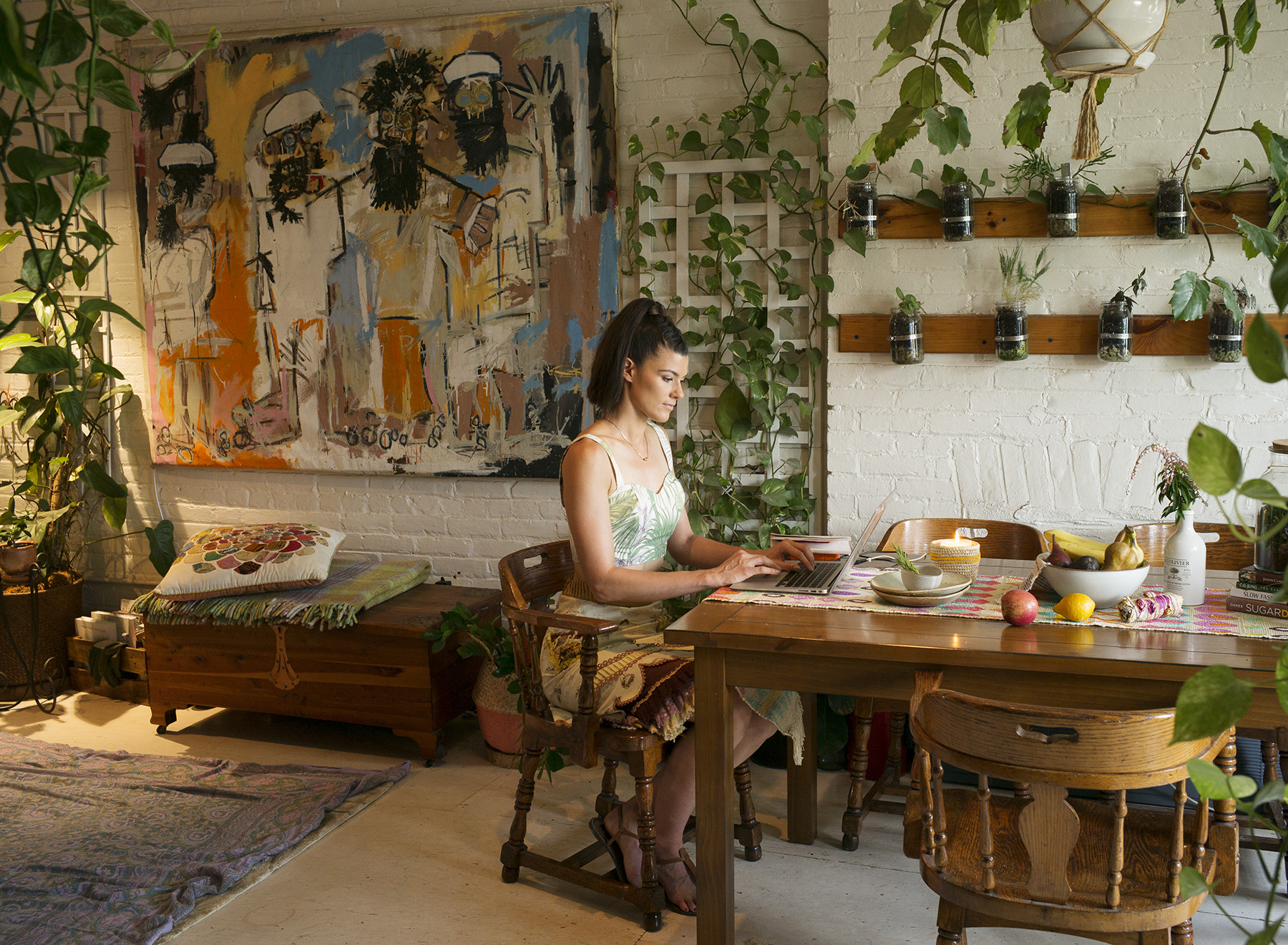 “The bathroom's the smallest room in the house but it's kind of cool, I have a lot of plants in here. Even in my shower, hanging above the shower. There's probably a little over fifty plants in there. You can do a lot with a small space, you know?” 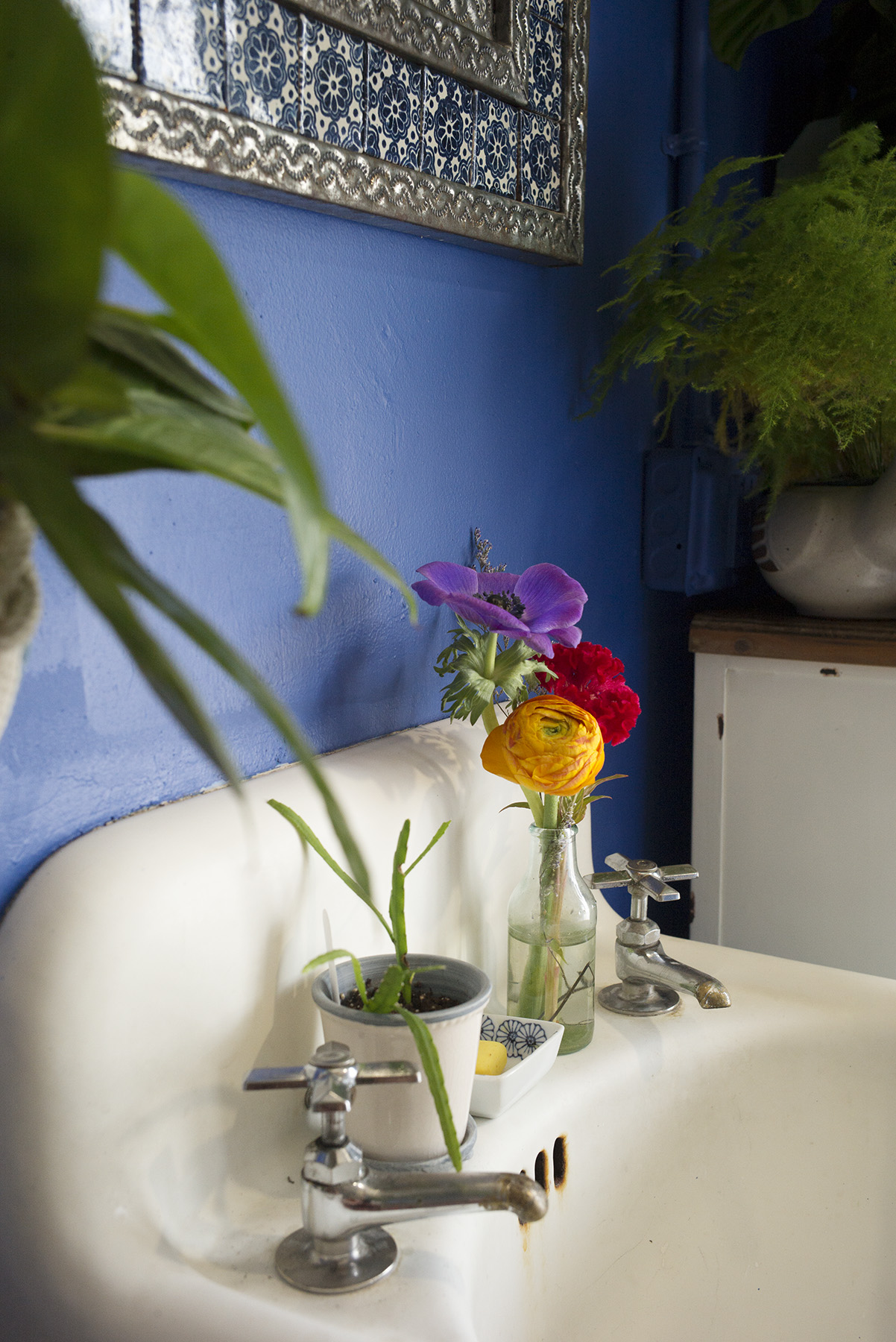 “This is my first vivarium. It basically manages its own humidity and watering, so I can easily take cuttings. I host a plant swap in New York, so these are great for that. I can just put plants in there and snip 'em and they're already full grown in like two weeks.” 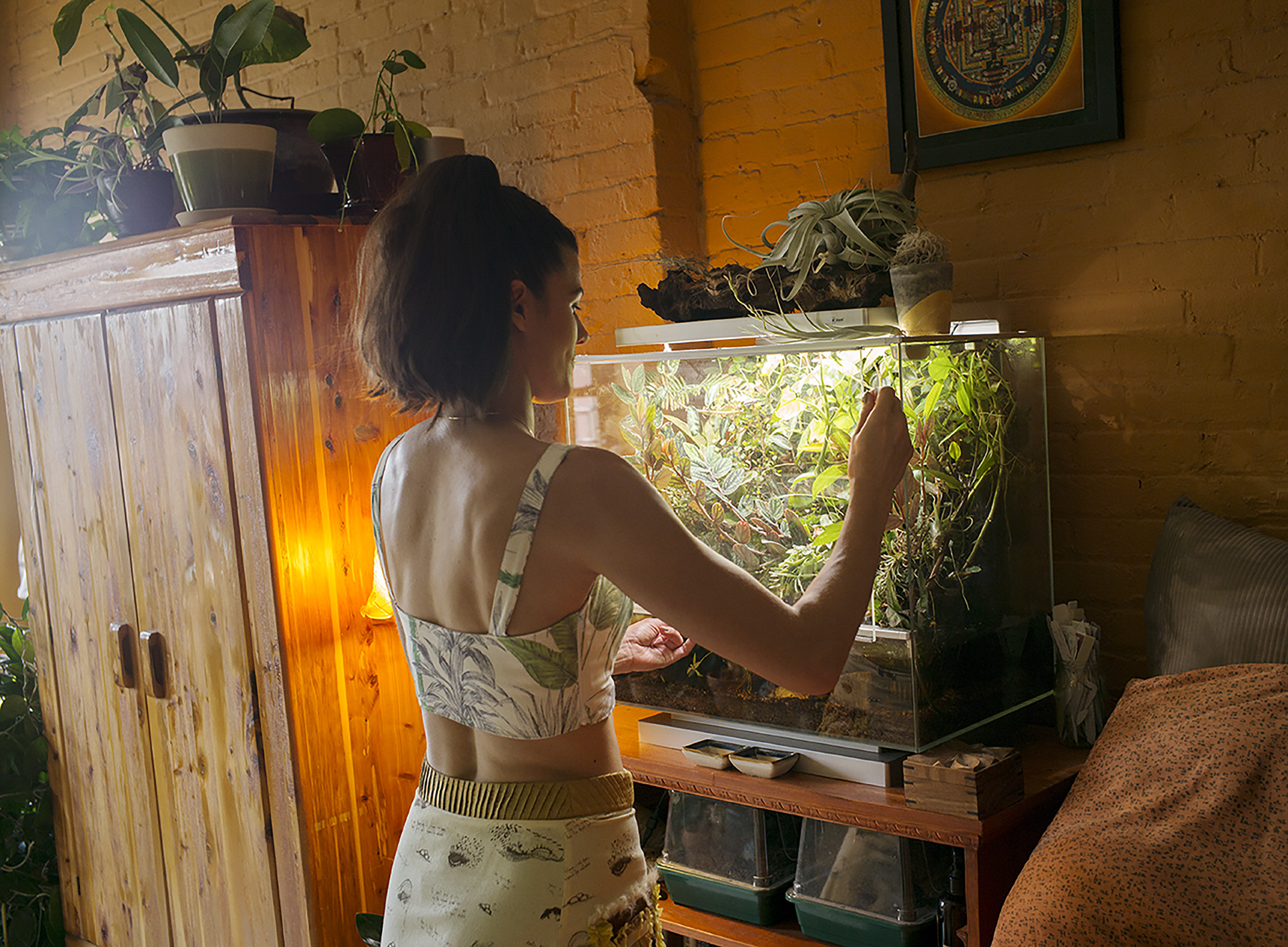 “This house is pretty eclectic. A lot of people are afraid of color in their house but I love it. I like that the colors in here change the mood of the space really well.” 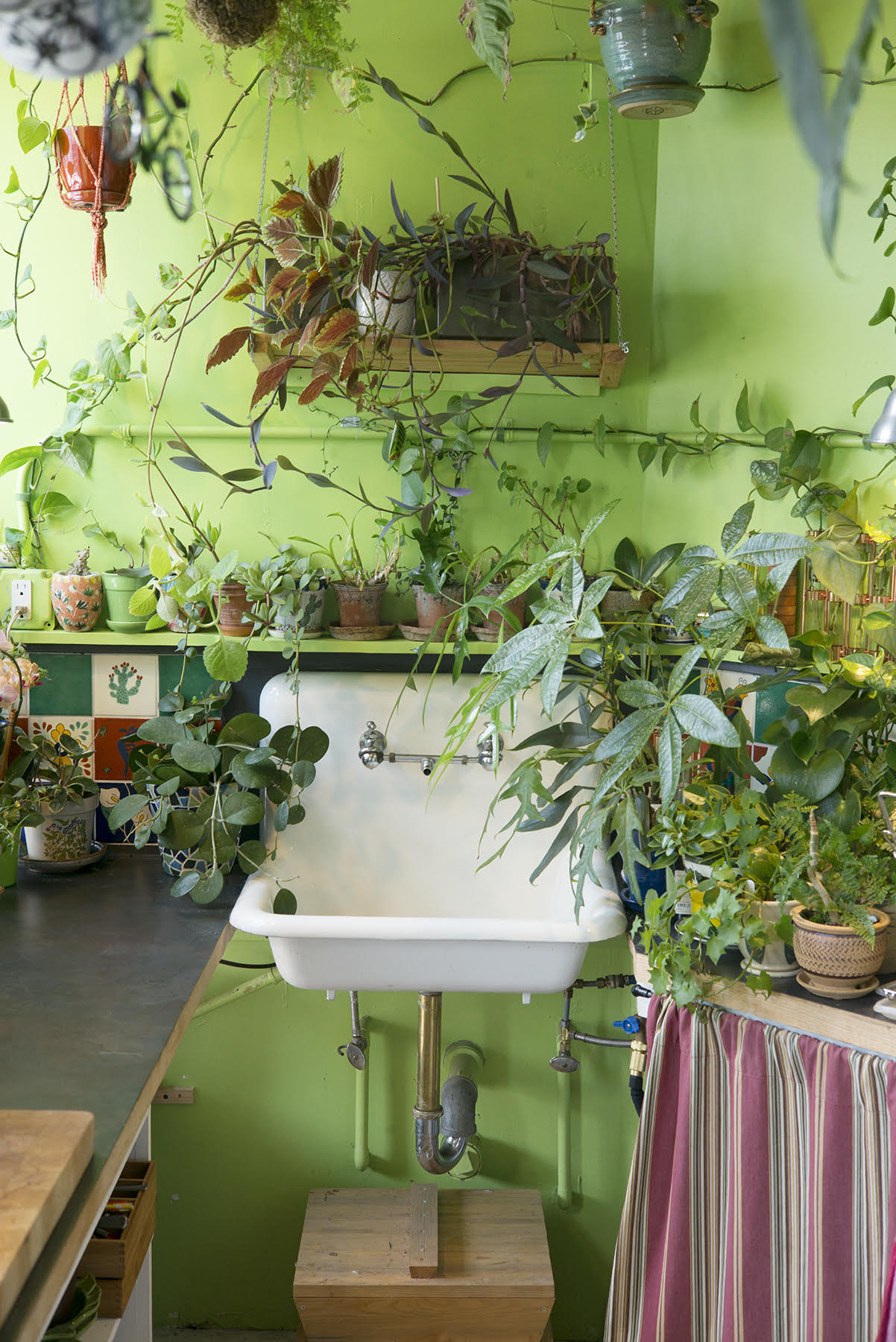 “I finally counted my plants and there were over 700 of them. It almost doesn't matter anymore because if you take clippings of one thing and root them in a separate pot does that count as two plants? It's almost endless. I just got a biopod and I stuck 75 plants in there and I'm going to get another one and put another 75 in there. I think so much of our generation is moving to cities and we don't have our personal green space anymore, so delving into that on a more psychological level is more intriguing and interesting to me. A lot of people say, ‘This feels like my grandma's home.’ That could be a bad thing, but there's still something about that! There's this nostalgia that we deep down kind of miss, that makes us feel like we're home.” 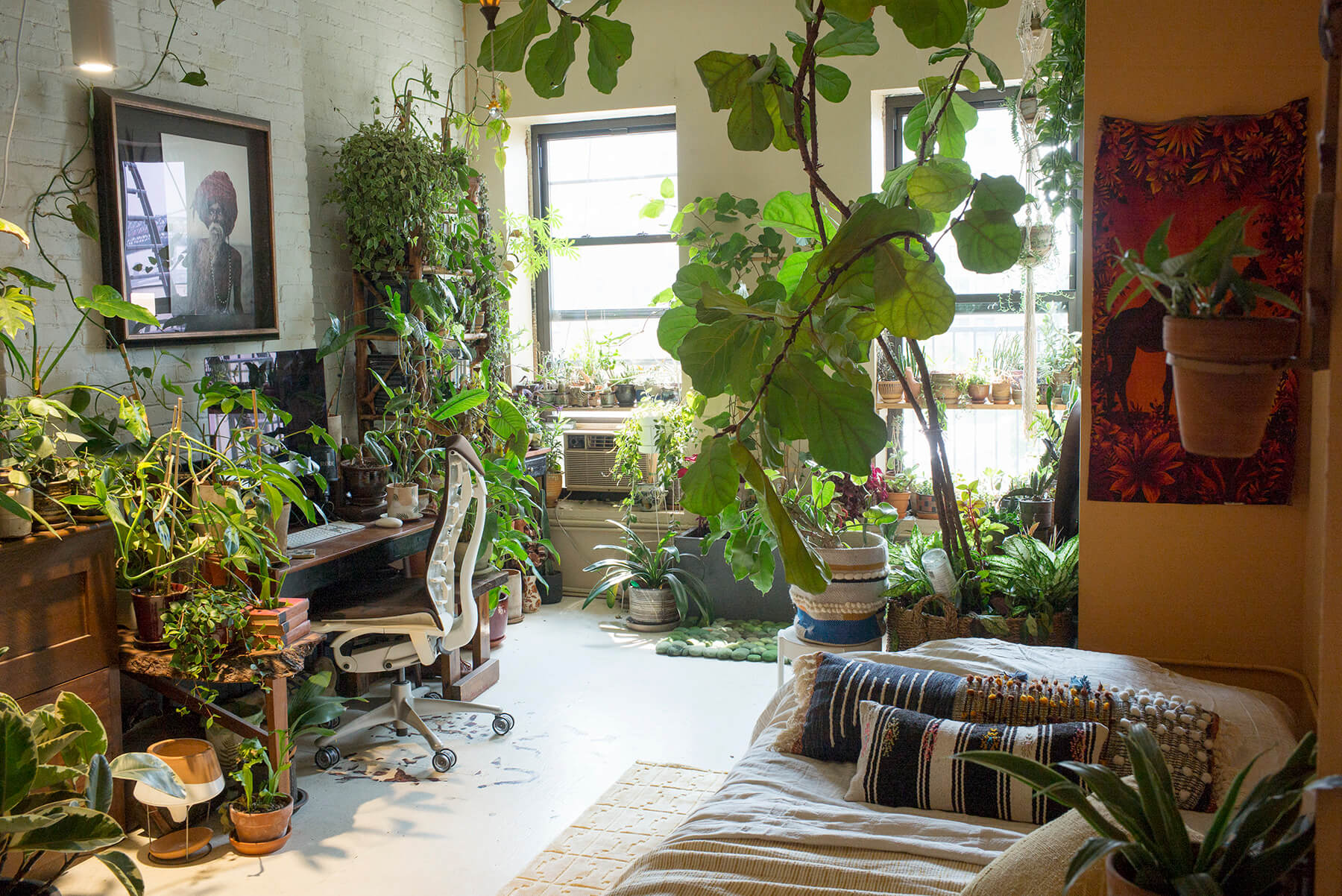 “I do a weekly web series now called Plant One On Me. Initially I started it because when my place started going viral, people kept on asking me the same questions over and over again and I was like, ‘There's no possible way I could answer all the questions.’ In the winter months, a lot of people ask what to do when the light goes down and your plants are getting drafty. And then a lot of the questions are, ‘What is this plant?’ or ‘What's wrong with my plant?’ I try to answer the questions where I can point people to a specific video now. It's much more efficient.” 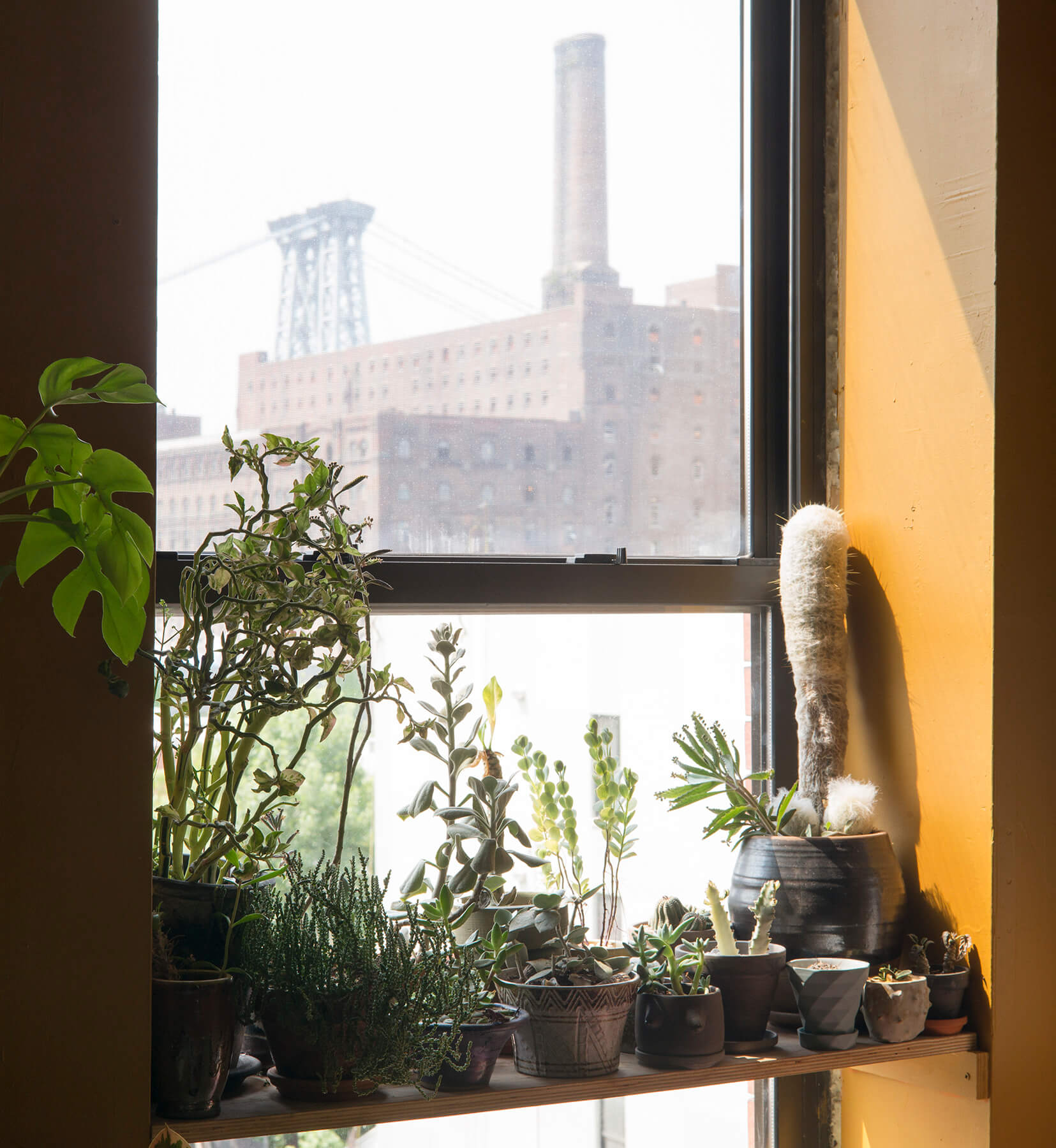 “That one looks like a dick, that's why I bought it. They're called Old Man cactuses, too.” 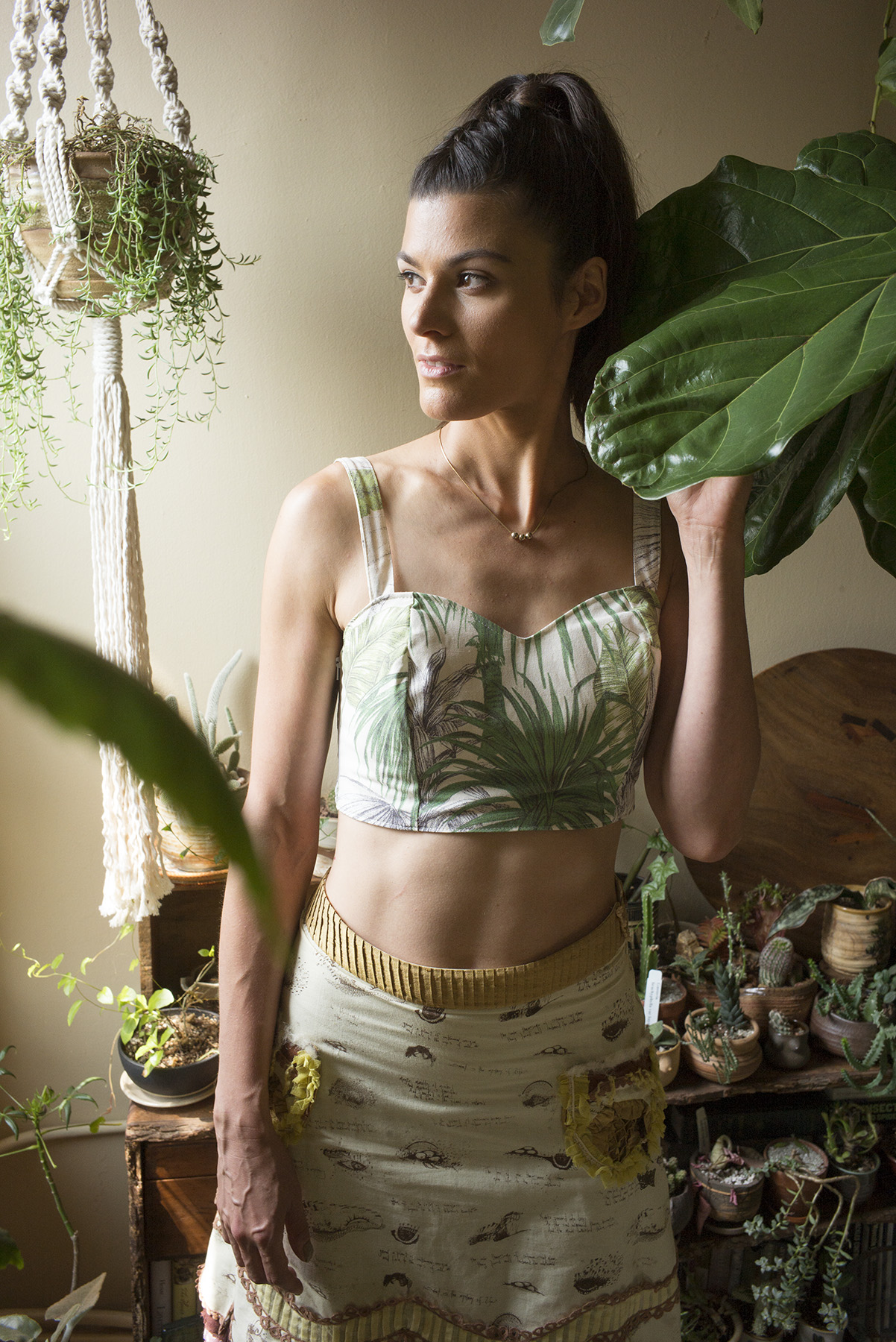 “It's my Netflix. This is my hobby. I love it. I've always loved it. It allows me to feel close to nature, it reminds me to get outdoors. I do a lot of work from my house, whether I'm writing or I'm doing video or whatever it is. I take the time to make my home feel like a place where I can relax but it's also a place where I can be productive.” 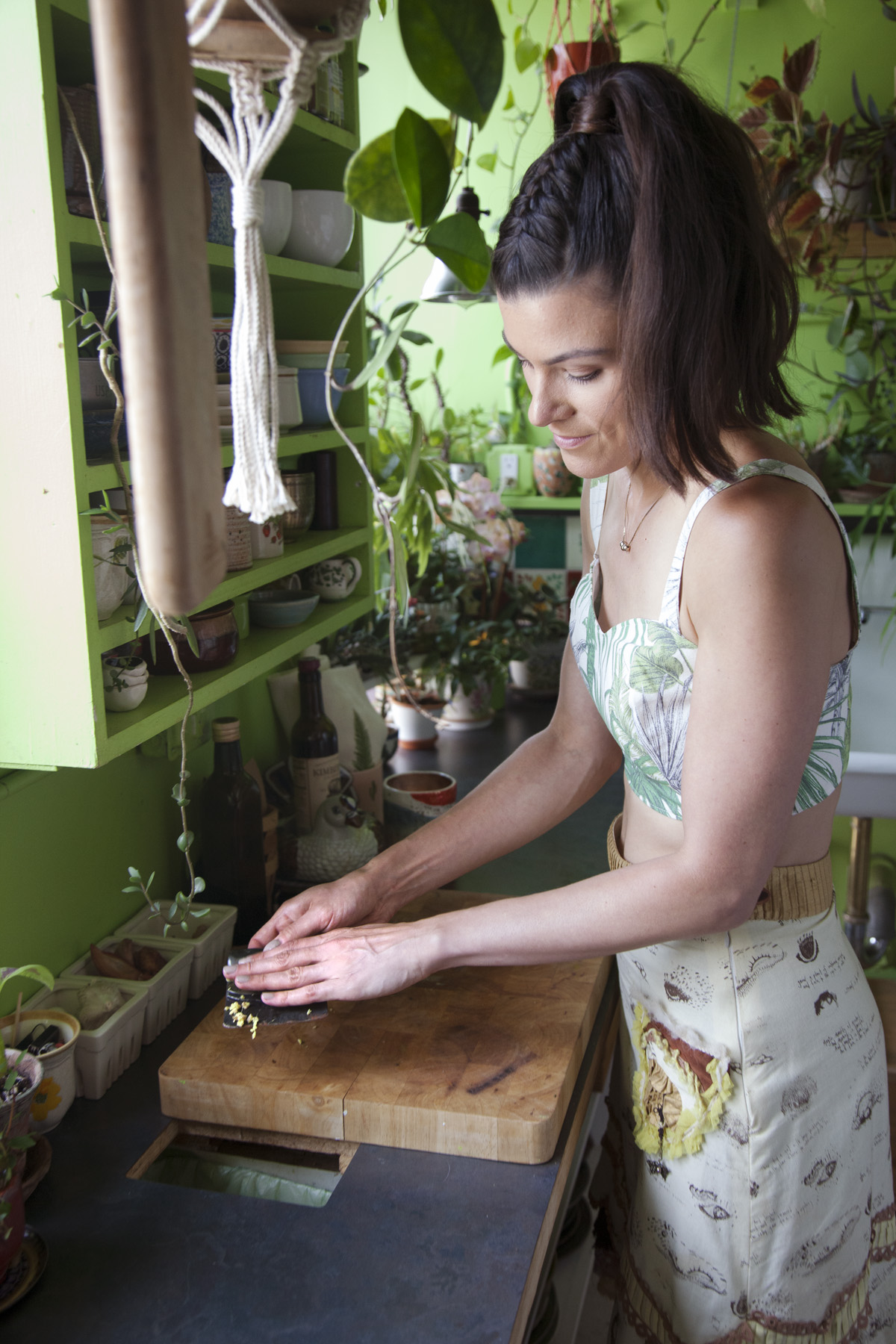 “I do a lot of cooking. I cut a hole down here for my compost. I have a real curry plant. If you're making any rice dish and you put it in a pan, it'll go crk-crk-crk. It's very good, it's very redolent.” 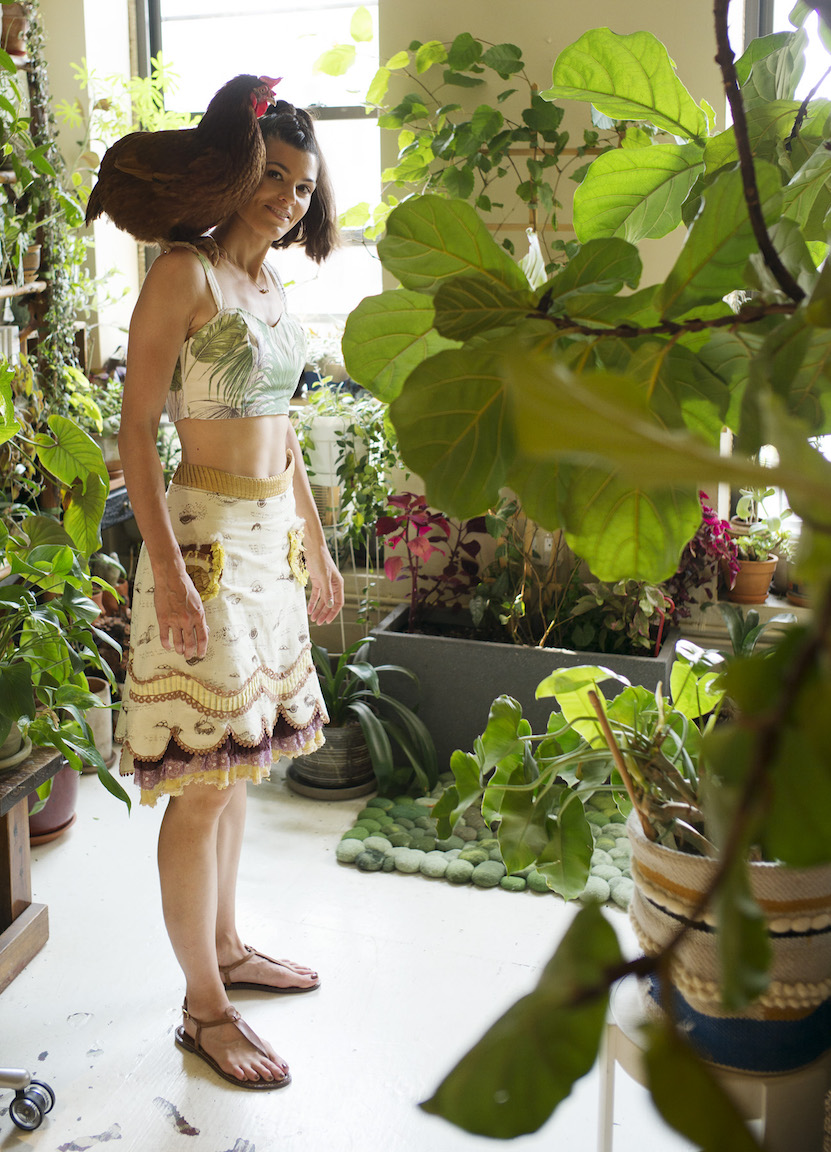 “Plants are up there with drugs and firearms when you try to travel with them. I've been able to sneak a couple through customs but it's better that you don't do that. When you order plants online, they all get sent bare root so that basically means removing all soil so there's no bugs or organisms on them. Sometimes customs will just sit on them for weeks and the plants are just languishing in their plastic bags and their bare roots. I've had some plants that are a little bit more sensitive that just never survive. You almost have to go with ones that will be super resilient when you order from a different place.”