The source for shopping decisions, impulses, and inspiration
Joy Cho baking in her Brooklyn apartment / Photography by Flora Baik
Shopkeepers

COVID-19 #SmallBizSpotlight | If not for the pandemic, Joy Cho wouldn’t have launched a business this early in her career. Published: March 09, 2021

The past year has pushed us all to rethink the meaning of work. After losing so much — loved ones, homes, community institutions, and the basic freedoms of not living among a deadly, invisible virus 24/7 — many of us have a new measure of perspective when it comes to our 9-to-5s. Life is just too damn short to do work that doesn’t make you feel good, and a new wave of young, scrappy entrepreneurs is bringing that sentiment into sharp relief.

Today’s interview continues last week’s spotlight on people who turned their passions into small businesses during the pandemic. Below, my conversation with Joy Cho, a Brooklyn-based pastry chef who, after getting laid off at Gramercy Tavern — the award-winning SoHo institution — last March, started offering weekly pastry boxes to her local community. After gaining a following with her “Baker’s Box,” a rotating selection of pastries, she recently launched a signature product, the gem cake, that’s taken NYC by storm (her weekly drops routinely sell out within hours). Keep reading for the full story.


When did you start baking?
I've always liked to bake. I wrote my college admissions essay in a recipe format, which I thought was very novel and creative at the time, but looking back, it's a little cringey. It was a passion and hobby of mine, but I didn't think of making it a career. I studied poli sci at UChicago, and I really enjoyed it. Throughout college, I worked different internships in government and [the] nonprofit [sector]. In 2017, I moved to New York, and in 2018, I started pastry school [while] working at an unrelated office job.

Did you have plans to change careers?
I started pastry school less because I wanted to make a career change, and more because I felt like I would regret it if I didn't at least try it. I went to ICE, the Institute of Culinary Education, and they make you do an externship of your choice at the end. And honestly, during pastry school, it was cool to learn new things, but it did very much feel like school. The externship was my first foray into the real world of kitchen work. I externed at a neighborhood bistro in Prospect Heights called Oxalis. I worked under one pastry chef there — it was literally her and then me. And she gave me a lot of responsibility. I know sometimes kitchen externs are just relegated to prep for eight hours, and thankfully I was able to do both production prep and service, so it was a very well-rounded experience. I would say the externship was when I started thinking, Oh man, what do I want my future to look like?

After the externship, you started working at Gramercy Tavern. What happened when COVID hit?
I was at Gramercy from August 2019 to March 2020. I lost my job mid-March. They shut the restaurant down, and then a few days later, they pretty much let all the hourly employees go. That was across Union Square Hospitality, which is obviously a huge group. It made sense, but I was still a little shocked. But if I hadn't lost my job, I definitely would not be where I am today. I wouldn't have thought I had the credentials yet to do my own thing. I ended up going back to Ohio, where I grew up, and camped out there for five months. I started baking because I didn't know what else to do. And then I was like, I wonder if people would pay for baked goods delivered to their house? Baker’s Boxes started out with family friends and my existing network, and by the end of my time in Columbus, my regular customers were all people I did not know at the beginning.


I started baking because I didn't know what else to do.


When did you come back to NYC?
In August. I continued the Baker's Boxes [in Brooklyn] all through last year. Gem cakes are very recent.

What was the inspiration for them?
I went home for Christmas break, and honestly, I was feeling pretty burnt out and unsure if I wanted to continue [Baker’s Boxes]. I felt a lot of strain in different ways, mentally and emotionally. The financial instability was difficult. I didn't know if I wanted to find a more, quote-unquote “normal," stable job again. I think I needed that time away to think. Eventually, I wanted to be in the kitchen again, and I wanted to create my own product, my own signature thing. Me and my mom went to Williams-Sonoma, and I saw this mini Bundt pan, and my mom was like, “Why don’t you get it?”

What happened next?
When I got the Bundt pans, I was honestly stabbing in the dark. The first three versions were admittedly not great. Then I was like, Why don't I try using a portion of sweet rice flour? I had seen a recipe that used a combination of both AP [all-purpose flour] and mochiko [sweet rice flour], so I knew it was possible. I didn't know exactly what I wanted to create, but I did know that I wanted something with structure but very delicate and tender at the same time. That was my target, and I tried a lot of different things in order to get there. But yeah, we had a lot of Bundts in the house for a long time.

I can imagine. Do you remember when you nailed the recipe?
It was the fourth try. And by the end I was like, I don't know if this is going to work. When you try three different batches and none of them are really getting close, it's frustrating. The fourth one was when I used some sweet rice flour, and it didn’t come out perfect, but [it was] definitely promising. That's when I felt a redeeming factor in all of this. But in order to land the recipe I have now, it went through a week or so of more edits and tweaks. I learned a lot about the R&D process through that.

Why did you decide to focus on the gem cakes instead of variety boxes?
I mentioned the lack of stability week to week ... I felt like having one product and doing a bunch of variations on it would be a very smart move, especially because it's one person doing everything. Also, I felt like it could be a unique, fresh offering for people in New York. People are familiar with Bundt cake, but they may think of it as more of a classic, old-fashioned kind of dessert. I wanted to change that perception. There are so many reasons I love gem cakes. One interesting thing that came out of this was leaning into my Korean American identity ... I don't want to box myself in as a Korean American baker who makes Korean-flavored desserts. I can be Korean American and make American desserts, too. And so with gem cakes, I've been happy to explore using Korean ingredients like Misugaru, a Korean roasted multigrain powder, and then experiment with Kahlua, or more classic, quote-unquote “American” flavors. This has been a really good outlet for me to explore all of these different directions, and I feel a lot of freedom in that. 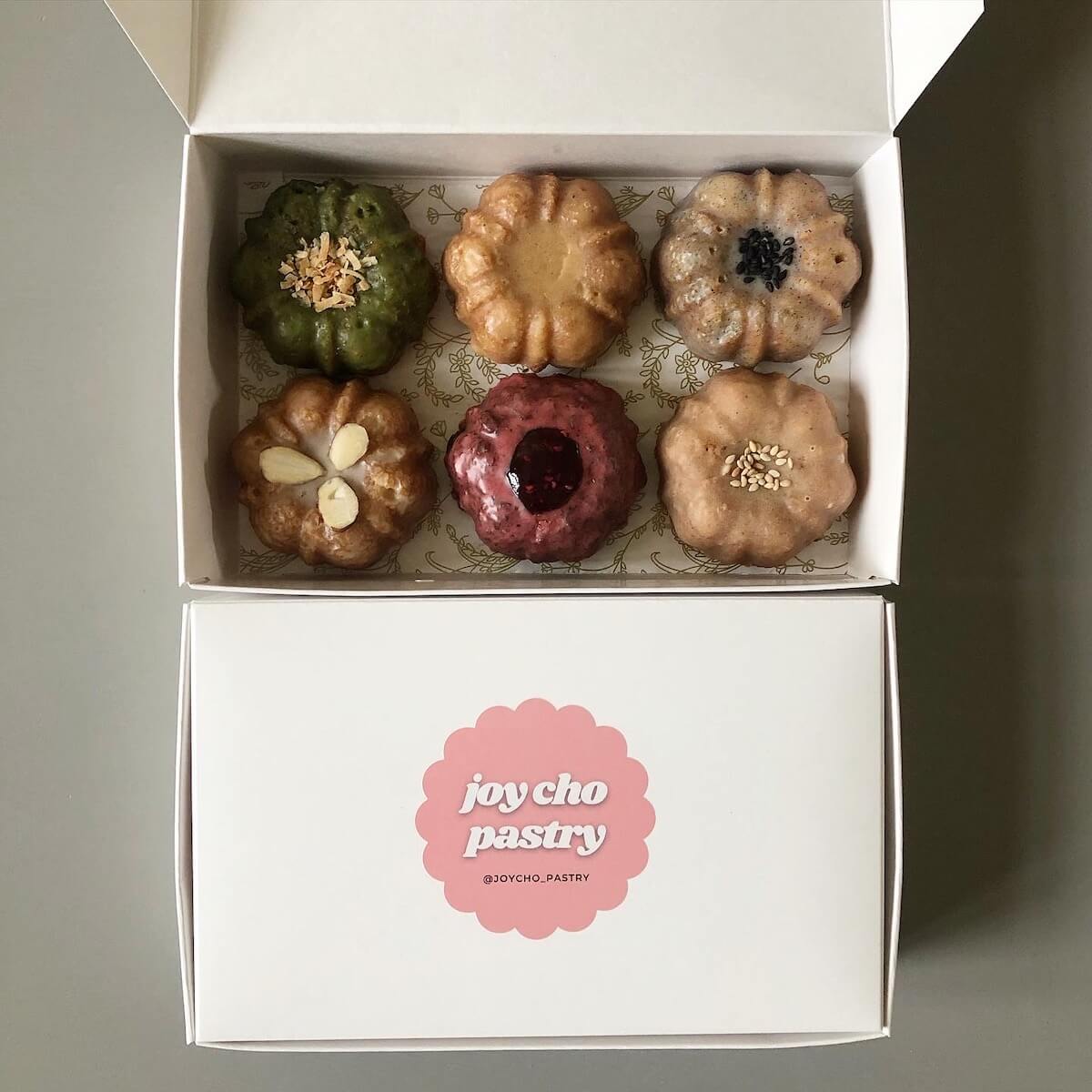 A box of gem cakes / Photography by Joy Cho


What has the response been like?
I've been pretty overwhelmed by demand. I had only offered it in New York for a few weeks and I [started] selling out and building a pretty robust subscriber list. I had also done weeks of marketing and teasers and a soft launch in Columbus, so I had built up momentum. The focus now is, How do I scale?

How many gem cakes are you making every week right now?
Oh my gosh. I would say on average 70, 75 boxes per week. So whatever 75 times six is, because each box has six mini cakes. [Editorial note: I did the math — that’s 450 cakes.]

Wow. That's amazing. Do you have a sense of who your core customers are?
I'm still getting to know who my repeat customers are, just because I've been away from New York. I used to offer a pickup option in Manhattan, but right now I'm just doing it in Brooklyn. For some reason I was always focused on getting customers in Manhattan, but actually, I’ve been surprised at how much of a local base there is. That's cool to see. I would love to build up those relationships, because they're not only repeat customers, they're my neighbors.

Your business has been structured, and in many ways inspired, by the confines of the pandemic. Looking ahead to when things are back to some semblance of normal, which aspects of your model do you think you'll keep, and which might you do away with?
I think I’ll do away with pickups and pre-orders. That makes sense right now, but I would like to offer it more on-demand, I don't know if that’s the right word — where people won't have to plan ahead in order to get my product. I don't know if that means a brick-and-mortar or a long-term partnership with a restaurant … But the product itself, I think there's longevity there. I thought about that when I was in the process of making it: I wanted to make something that would transcend the limits of the pandemic. I see gem cakes as a fixture at weddings, bridal showers, baby showers, and parties. I'm looking forward to being able to do more events after the pandemic recedes.

Speaking more philosophically, do you think people’s attitudes towards dessert in general have evolved over the pandemic?
I think people gravitate less towards something really composed, plated, and presented to them, and more in terms of accessibility. There's less of an emphasis on dessert as an ending to a nice meal and more [people thinking], I can eat dessert on a Tuesday afternoon while I'm checking emails. It's become a lot more commonplace to get dessert and pastry boxes and spend money on these things. Whereas before, it might have been a super special occasion thing.

As you explore different ways to scale in the coming months, what’s your number-one focus area or pain point?
Figuring out delivery. So many people ask about deliveries. I know the demand is there; how can I meet it? How can I do that in a way that is sustainable? That can go a lot of different directions. Do I want [gem cakes] to be as widespread as possible, or do I want to keep them more exclusive?