COVID-19 #SmallBizSpotlight | In Greenpoint, a Lebanese-American chef takes over a beloved deli from his neighbor. Published: April 20, 2021

As I write this, the closing arguments in Derek Chauvin’s trial are being live streamed from Minneapolis. It’s been an especially harrowing news week in America, with Chauvin’s trial playing out while details of the police killings of 20-year-old Daunte Wright and 13-year-old Adam Toledo emerged. But in the face of despair, there are actions you can take: Call on your local officials to reform racist policing policies. Support Daunte’s family. Support Adam’s family.

This week’s #SmallBizSpotlight is a rare — and much needed — story of staggering success in the pandemic. When COVID forced Edouard Massih, a 26-year-old Lebanese-born, Brooklyn-based chef, to shutter his catering company, he took over his neighbor’s Polish deli and turned it into Edy’s Grocer: a restaurant/market hybrid with a rotating monthly takeaway menu and packaged Lebanese and Polish specialties. Since opening last summer, Edouard has become a food media phenom, likely thanks to some alchemy of the rise of at-home cooking, the glowing reviews he’s received from old and new establishment journalists, and his infectious joie de vivre (which, alongside drool-inducing food photography, lands particularly well on Instagram). Keep reading for our conversation.


What did you do after the pandemic forced you to halt your catering business?
I started doing this quarantine menu from my home, but the health department shut me down from cooking in my own home. So I was completely shut down, both by the health department and then also, there was no work.

How did Edy's Grocer come to be?
Well, Edy’s is around the corner from where I live. I was a big fan of Maria’s Deli, which was the previous [storefront in the space], owned by Maria Puk. I lived right there, and it's something that was always in the back of my mind … I've always wanted to bring my catering to a storefront, and the store was already set up to be a grocery and a market. So it was the best of both worlds.

Why did Maria’s Deli close?
The pandemic. It was definitely bittersweet. She had owned the place for 43 years, so she was very attached to it. We had talked about me taking over for years, but it took her a long time to let go of it. So when she was finally ready to go, that was a big moment for her. From June to July, I helped her clean the store and get all her stuff out, which was a lot — 43 years' worth of stuff. It was very emotional. A crazy amount of history in one space. I don't know how to explain it. Such a small business running for 43 years, that's a number I could never even grasp or understand. I'm eight months in, and I'm like, I don't know how I'm going to get through five years. Literally. 43 years just seems endless.

So 43 is more than a lifetime for you. Where is Maria now?
New York ... She took the winter to go retire in Florida and now she's back in town.

Has she seen the new space yet?
Oh yeah. She was part of the whole thing.

What does she think?
She loves it. She's very happy for me, and I think she's happy to see that it's still alive the way that she used to run it ... I kept it the same way she had it, [which is] a deli and market. She really likes the fact that I'm young and she was young when she got in, and that I'm taking care of the space, really putting my heart into it. It’s a different immigrant story, but it’s still serving the community.

Did COVID restrictions force you to rethink your original business plan?
I was in Australia before the pandemic, and I went to this store that I really loved that had bulk food and sold jars that you could refill … Kind of what Sahadi's [Brooklyn’s iconic Middle Eastern grocery store and deli] has as well, those big buckets of spices and nuts. That's what I was going for, like a Moroccan spice market feel with big bags of lentils, peas, and spices, but I couldn't do any of that. We had to package everything. 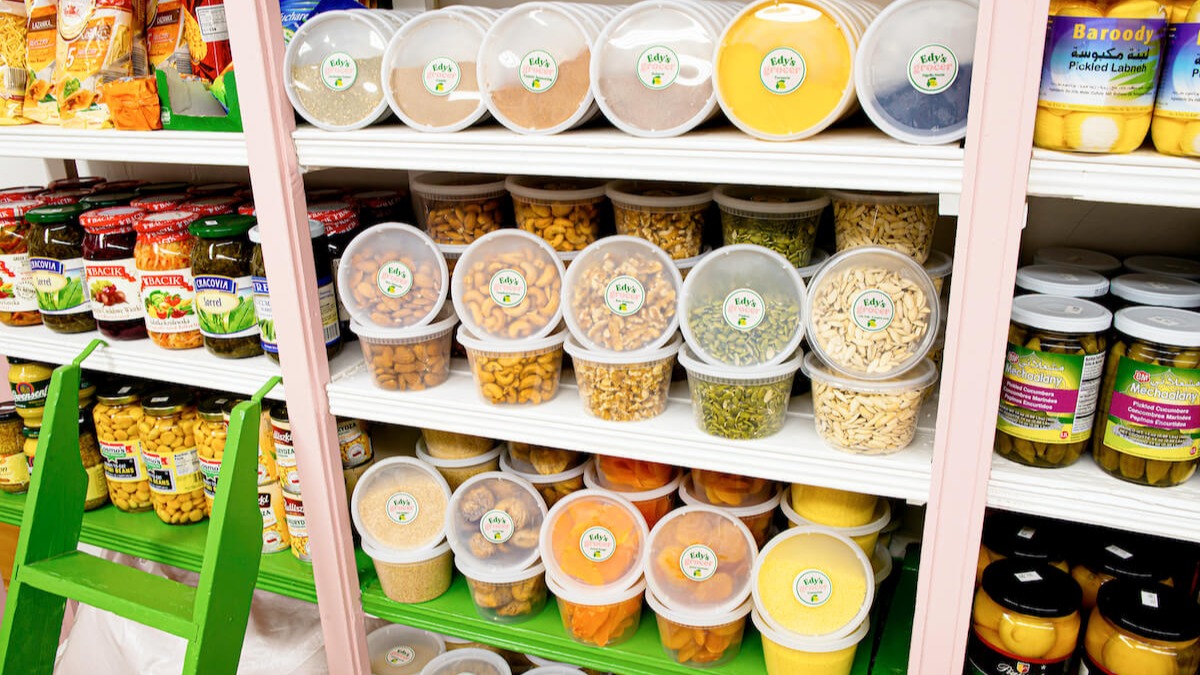 How did it feel to open a business at the height of the pandemic?
It was very scary, and it's still scary. It's a lot of work. A lot of COVID scares. We have a team of 12 people, so you just never know. It’s been quite a ride. When I opened, I never imagined the success and the beautiful community that this store has brought into my life.

You've had some amazing press: write-ups in The New Yorker, TimeOut NY, New York Magazine ... Did that surprise you?
Yes, it very much surprised me. To be honest with you, it’s been a lot of years of me trying to be seen and not being seen at all. As a personal chef and caterer, the press doesn't look at you. So now out of nowhere, I open the shop and there’s a flood of press stuff. It’s been quite a shock, but also very gratifying.

Who is your community?
It's a loving community. It’s really fun to see a generation that's more excited about food than anything else, especially during COVID, and to teach them about Lebanese delicacies like kibbeh, which is a meatloaf, and riz a jej, which is “dirty rice” [a spiced rice dish with onions, ground beef, and shredded chicken]. I love when they come back and bring a friend back and teach that friend about Lebanese meatloaf and try to say the Lebanese food in Arabic, which is funny, but also really brings joy.

What’s a typical day like for you?
There's no such thing. I get in around 7:30, 8, and we start cooking and then I get out of the kitchen around 11 or 12 and go into the office and work with my assistant on some stuff, and if I have to go back and shoot things [at the store], I do that. There are order days, delivery days, meetings days. Every day is a very different day.

Your social media presence is amazing … Are you orchestrating that?
Yeah, throughout the years, social media has been my strength. I'm mainly behind all that. We try to do one big shoot day right at the beginning of each new menu. We have five, six outfits, we shoot it all, and then throughout the month we [post]. We're big on scheduling and strategies for when to post what.

How do you conceive of your position within the greater culinary scene of Brooklyn?
I don't know how to answer that … One thing that's been very hard about all this is that I've been stuck at the shop and within a three-block radius [of it] for the past eight months, and I haven't been able to go anywhere or do anything and really enjoy the New York that I used to enjoy. I don't know what I have done to the community. There’s been so much great press, but at the same time, it's been hard for me to digest it all because I haven't been able to step aside and take it in. It's been a little hectic.

As the vaccine rollout continues and restrictions lift, how are you planning to grow and perhaps evolve your business model?
Well, catering is definitely picking back up … But we'll see what's going to happen. I think I'm going to keep a limit of three people in the store. I don't want to lift that; it's nice to only have three people in, because it's very small. We’ve been able to get our whole team vaccinated. But I really don't know where the future's going to take us. It's hard to talk about that. Sorry, one second … [Muffled background talk] I'm walking around the city and this girl just recognized me.

Lastly, what menu item would you recommend to someone who’s never had Lebanese food before?
Our fattoush [salad] with some kebabs and a dip on the side — that's a really nice lunch or dinner. If you want to ease your way in, we have a za’atar chicken salad sandwich with Greek yogurt, capers, celery, and cucumber on sourdough bread.