The source for shopping decisions, impulses, and inspiration
Photography by Gabriel Zimmer
Anatomy of a Room

The illustrator and artist shows us around his Brooklyn studio.Published: January 20, 2019

For illustrator, fine artist, and writer Oliver Jeffers, chaos is wonderful, as long as it’s organized. In his Cobble Hill, Brooklyn studio, everything—down to sheets of different colored collage paper and several kinds of screws—is in its right place. “I would say that my studio is organized because it has to be,” he says, while giving Quiddity the grand tour of the charming and lived-in space he’s worked in for eight years. “I wasn't necessarily that organized until I moved to New York. I needed to try to get a lot of stuff to fit in a small space. And I work quickly so I need to know where everything is on hand.” For that reason, labels are handwritten in easily erased white wax pencil and adorn endless stacks of wooden flat files and cabinets.

Jeffers moved to New York from Belfast, Northern Ireland, almost 11 years ago, and in the time since, he has published dozens of his own books, illustrated several others, held a host of gallery shows, produced a music video for U2, helped develop an iPad app for one of his books, and won a laundry list of awards, including a BAFTA in 2009 and New York Emmy in 2010. His most recent picture book Here We Are: Notes for Living on Planet Earthbecame an instant New York Times Bestseller, which is pretty special when you learn that he wrote it as a sentimental guidebook for his young son. Now—yes, there’s more—he’s just released a collaboration with French sneaker brand Veja based on the designs from Here We Are. Oh, and he has a new book coming out in October too.

Though Jeffers is well-known as a writer and illustrator of picture books—“I call them picture books because I tend to find as close as a third of the people who come to the book events are adults,” he says—he’s an internationally renowned fine artist, too.

“I used to keep [the two crafts] very, very separate because people just couldn't wrap their heads around the fact that the same person was doing both of these seemingly disparate works,” he explains. “More often and more recently, I've not been hiding behind either one and have sort of openly embraced the fact that I do them both.” He has a lithograph coming out with Rizzoli this fall, as well as a gallery show slated for January, and a few picture book projects up his sleeve.

This summer, Jeffers gave us a lesson in making the most out of a small space, the importance of a dynamic colored pencil, and the fine line between creation and destruction. 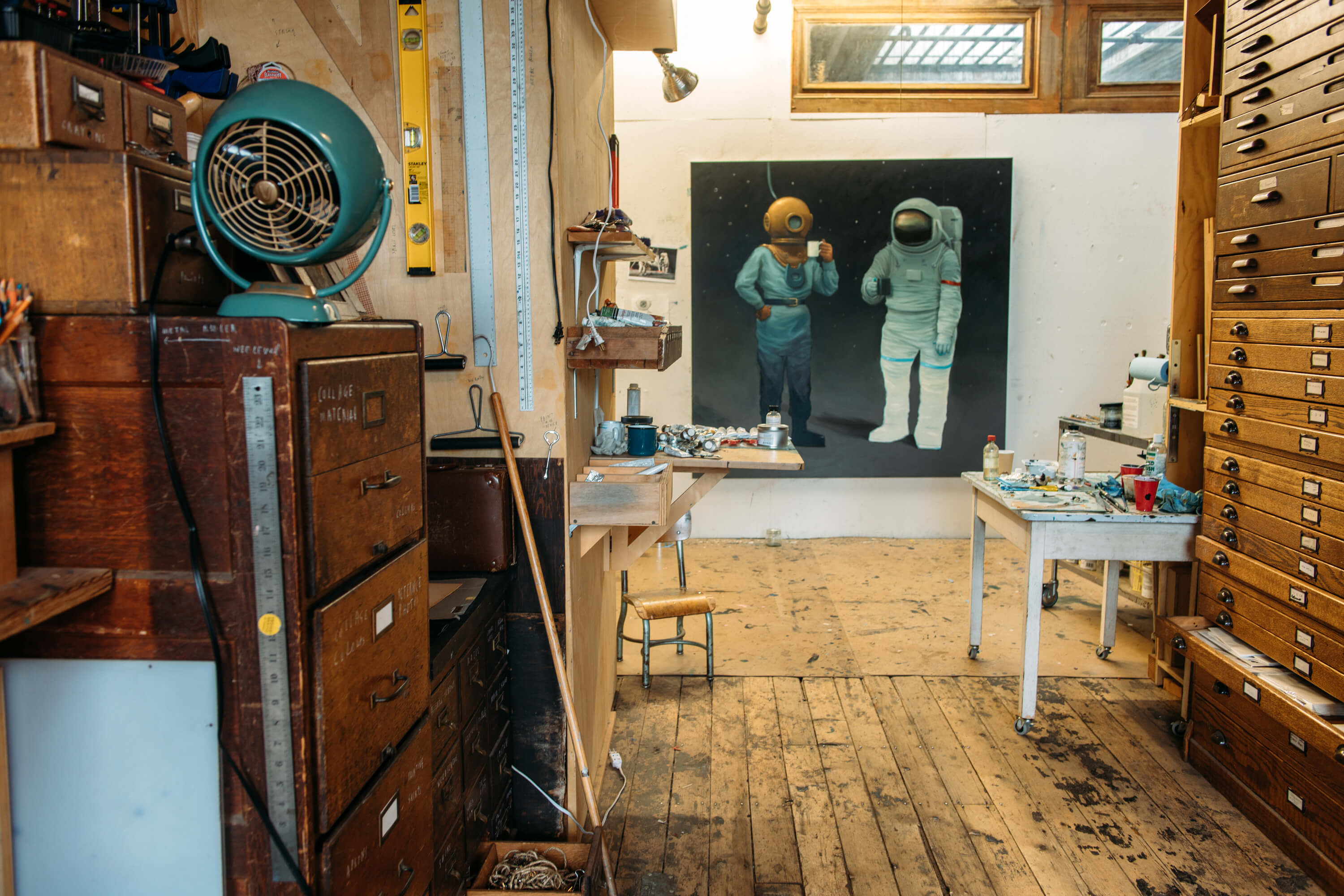 “I work back here for larger oil paintings. These are works that I'm going to have for a show in January, though this one is not quite finished. I put in natural daylights so I could have better natural light, but the skylight has always been there.” 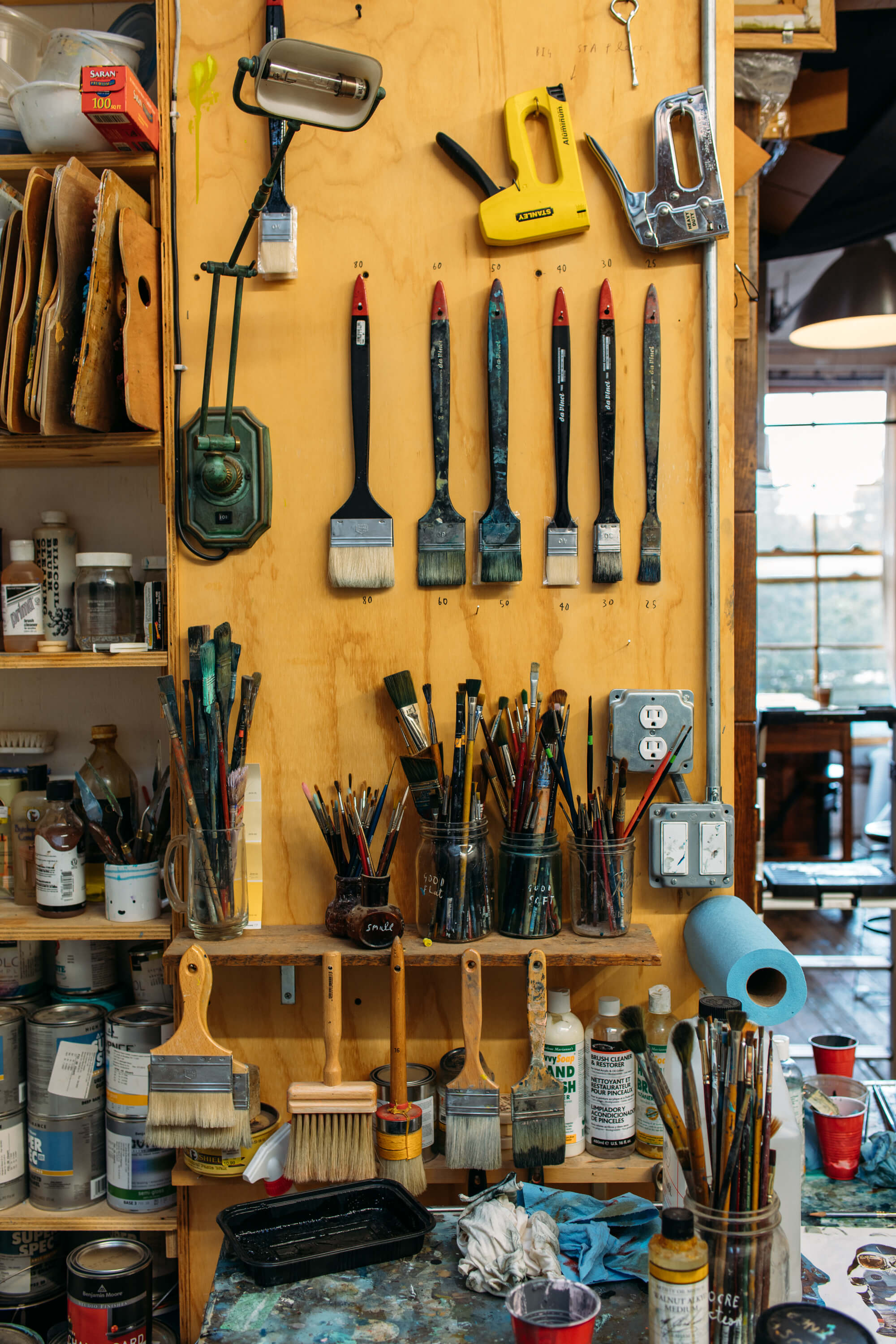 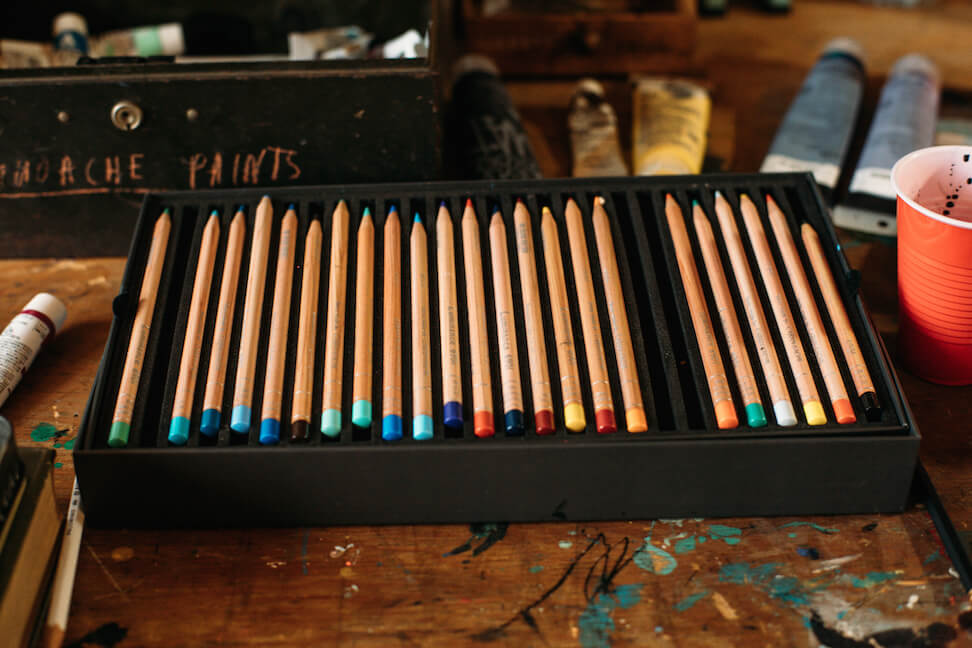 “With pencils, I like Blackwing drawing pencils. They're both hard and soft at the same time, so you can do a very light line, but also go dark and it's malleable. For colored pencils, the Caran d'Ache permanent colors are fantastic. I didn't realize that I even had a preference until you asked me. I go through phases of things. Over the years you figure things out that work for you. And then you tend to stick with those for a while.” 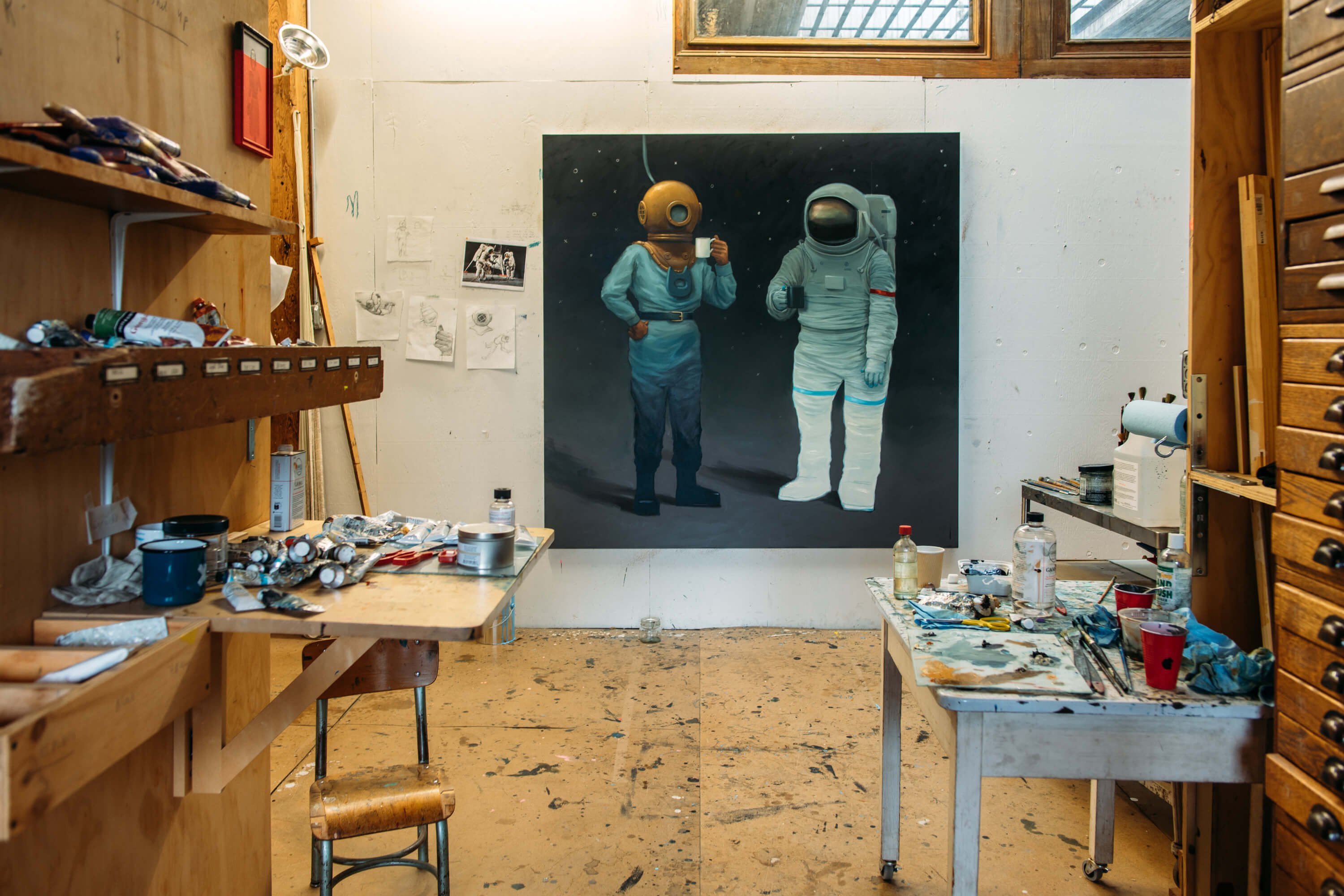 “This can be a total mess, depending on what stage of a process I'm in. I've been working on ink the last week so I haven't actually touched these, so this is relatively clean right now. But there can be paint everywhere and tissues all over the place.” 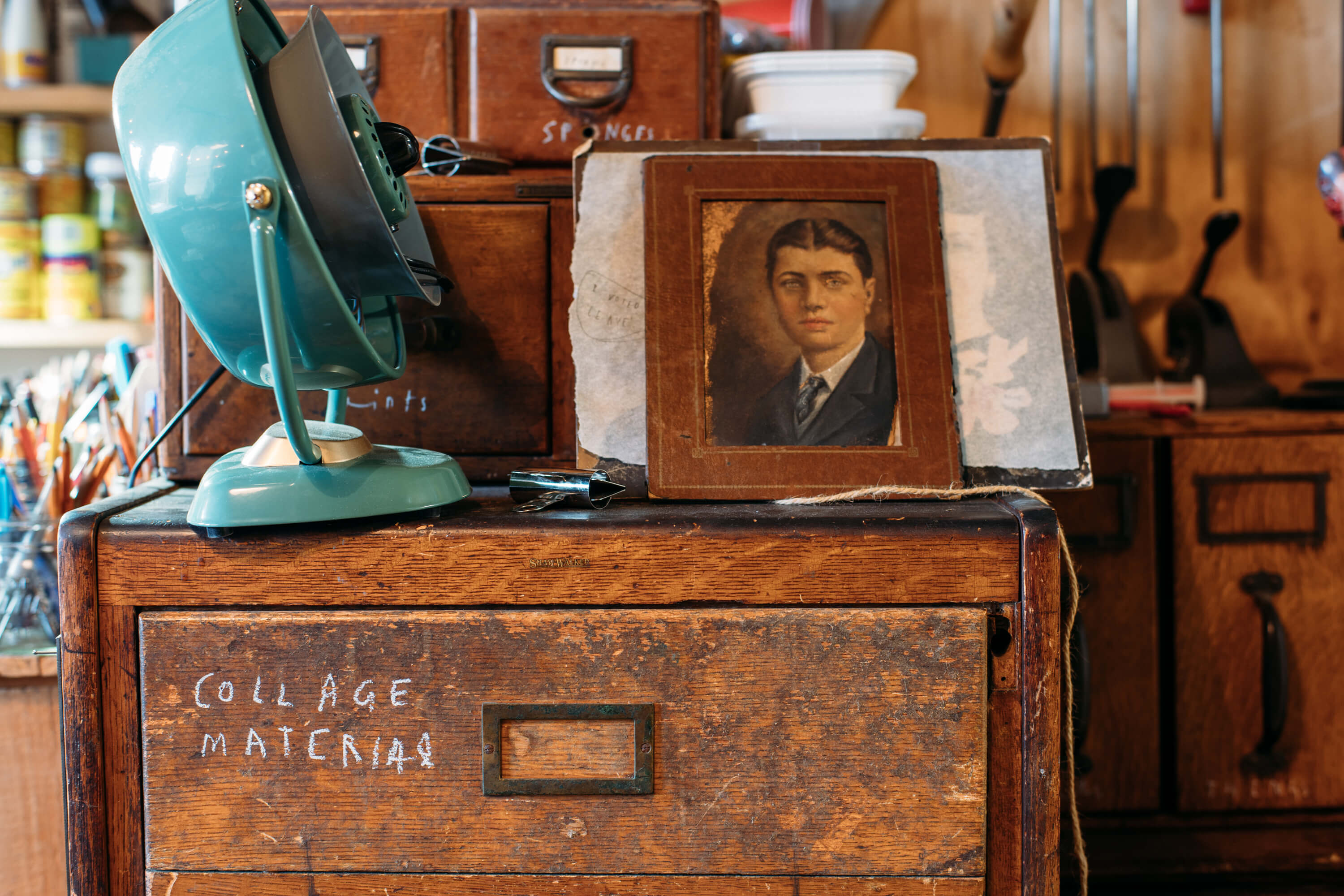 “If I'm working on a book project that uses collage, there are pieces of paper all over the place. I have some friends whose studios are just big and white and clean. This one has a lot of personality. It's definitely more my vibe.” 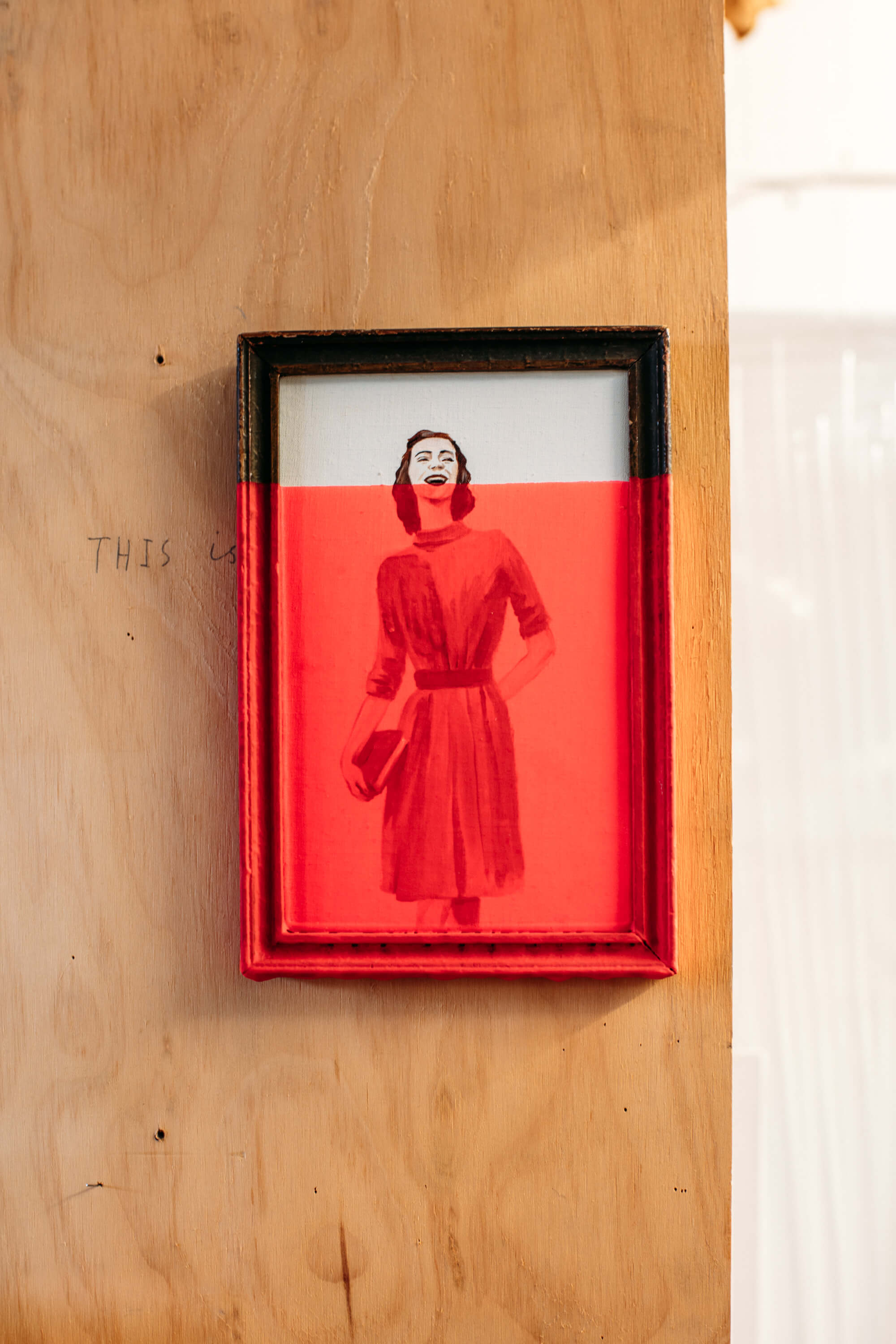 "I go through phases with color, and right now, it's neon red. Once or twice I popped it into something and I just sort of really liked it and for now, it’s just my go-to color. “ 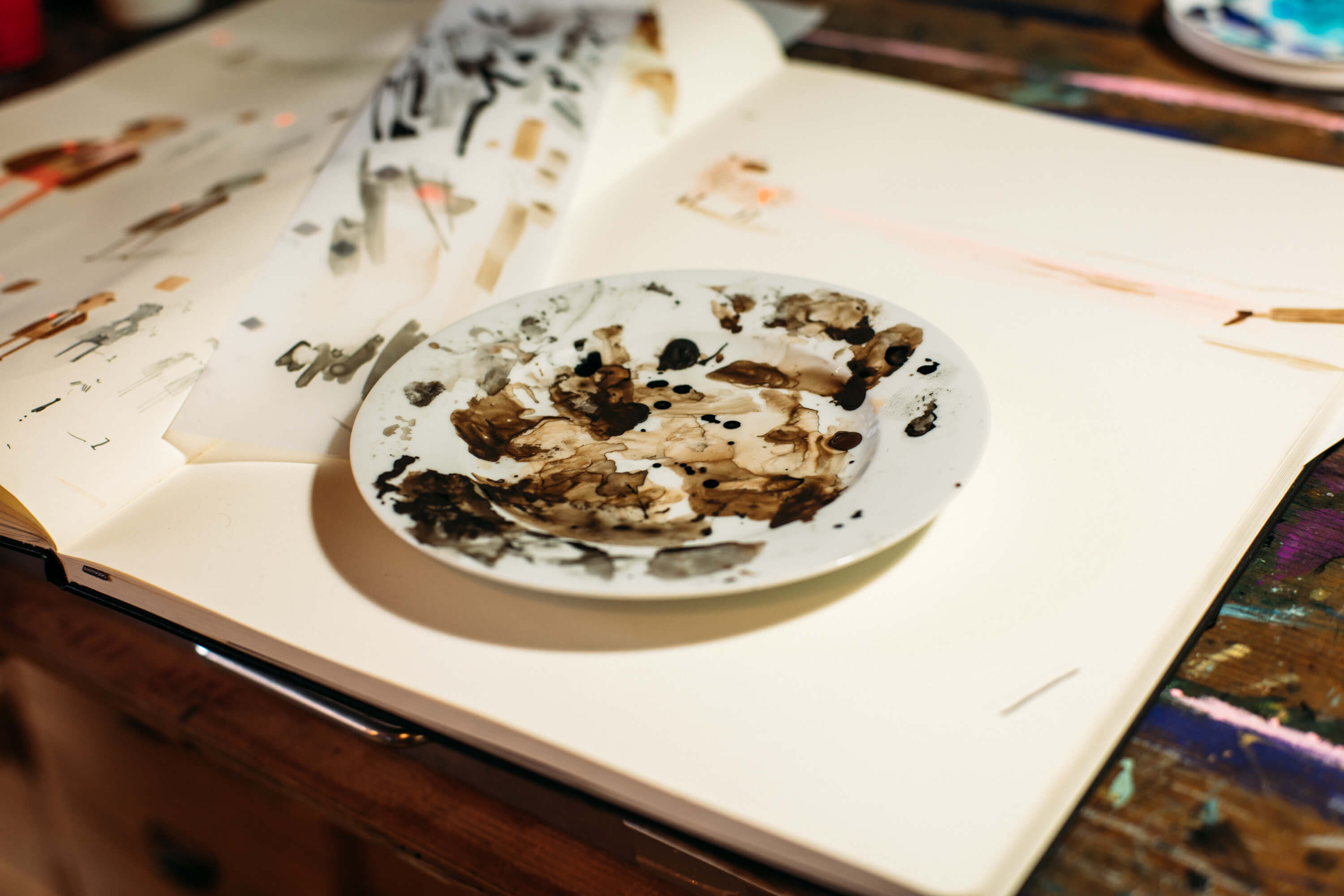 “I tend to go with Moleskines, I get these year planners. I save all of them. I tend to have a little notebook on the go at any one point, a larger sketchbook, and then my calendar. I haven't referenced any of my old calendars yet but I keep them all just in case. I spend a lot of time in here, especially these days, because we're trying to take a year off. I'm trying to do twice the amount of work in one year. So I'm here until midnight most nights.” 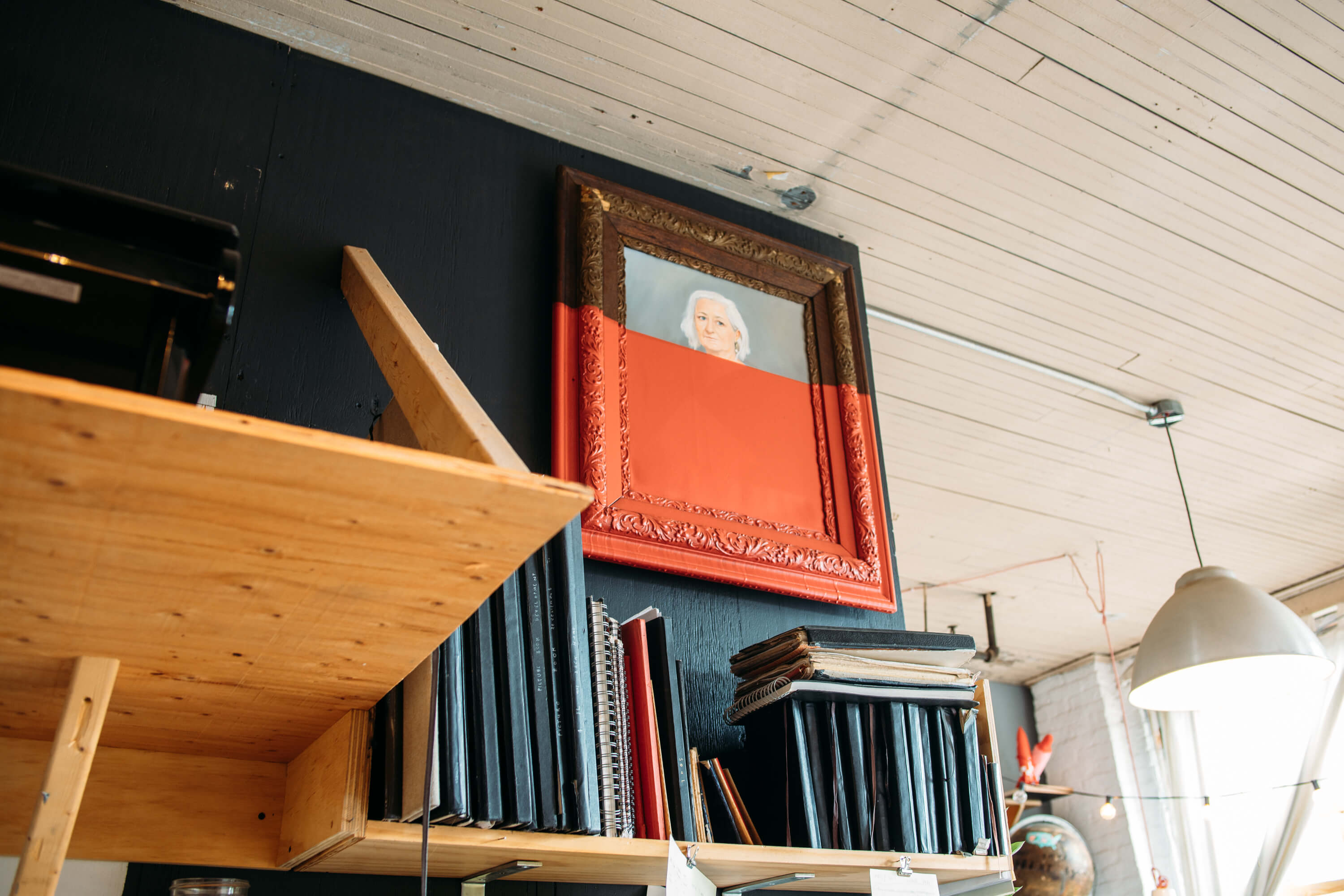 “This is part of a dip painting series where I paint the portraits first and then I do a ceremony where I submerge them in front of a small group of witnesses. The whole thing is [about] testing memory and identity. There are 16 portraits in total. I'm getting ready for a show where we bring them all together, and there's a film aspect and a couple performances a year. I tend to go through the emotions of the experience when I'm painting the actual portrait, rather than at the performance, because I'm sort of making sure everything is functioning at the performance. There's this strange sense of it not being complete until the dip happens. There's a fine line between creation and destruction.” 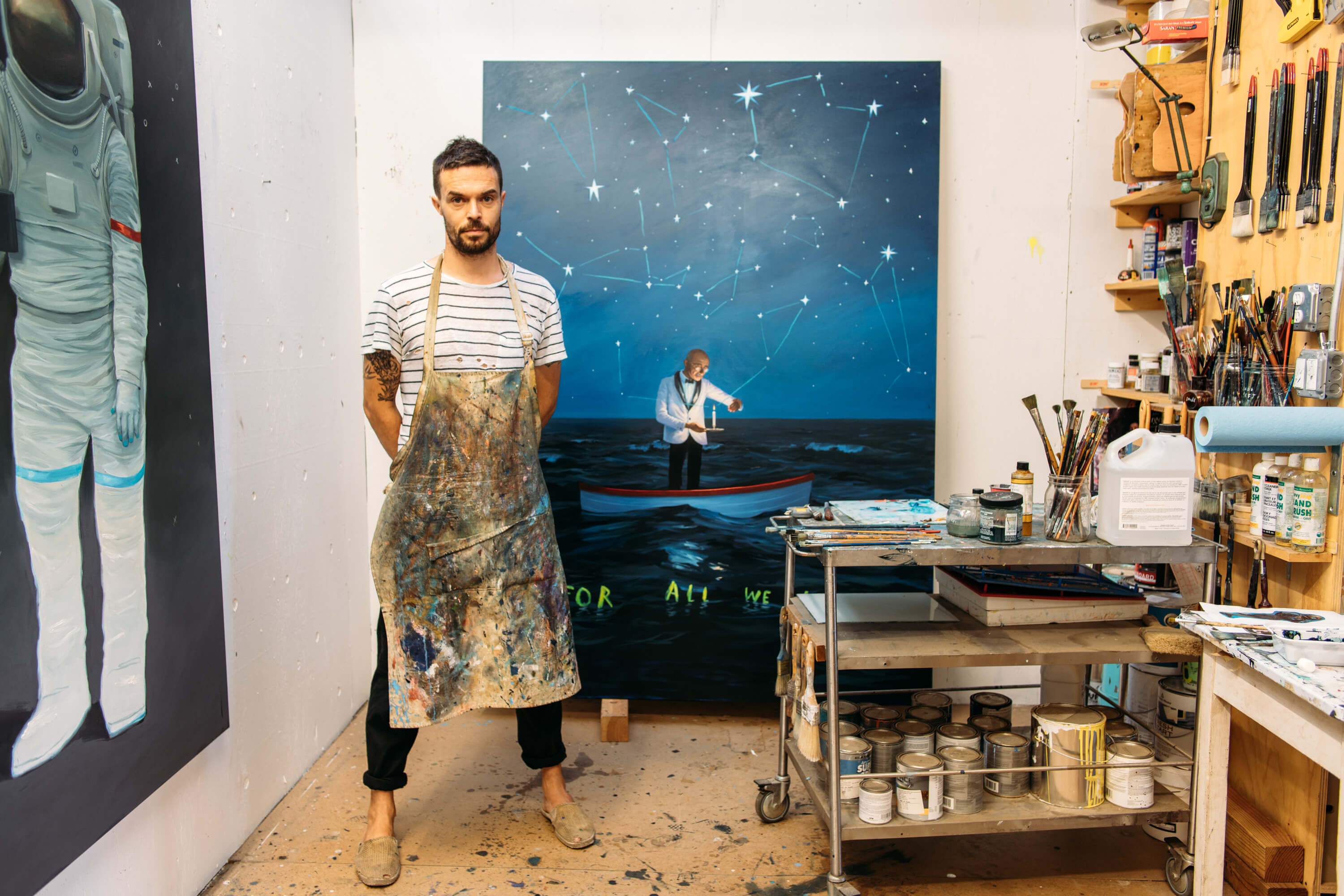 “I have two aprons in the works. I think I've had this since I moved to New York. I had an apron in Belfast that basically stood up on its own by the end of its life.” 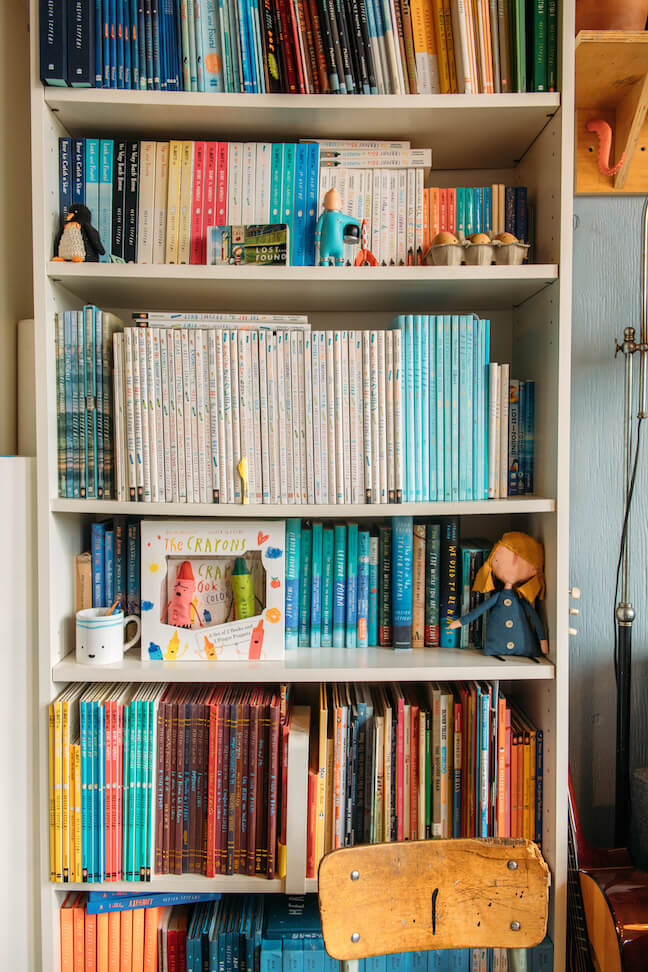 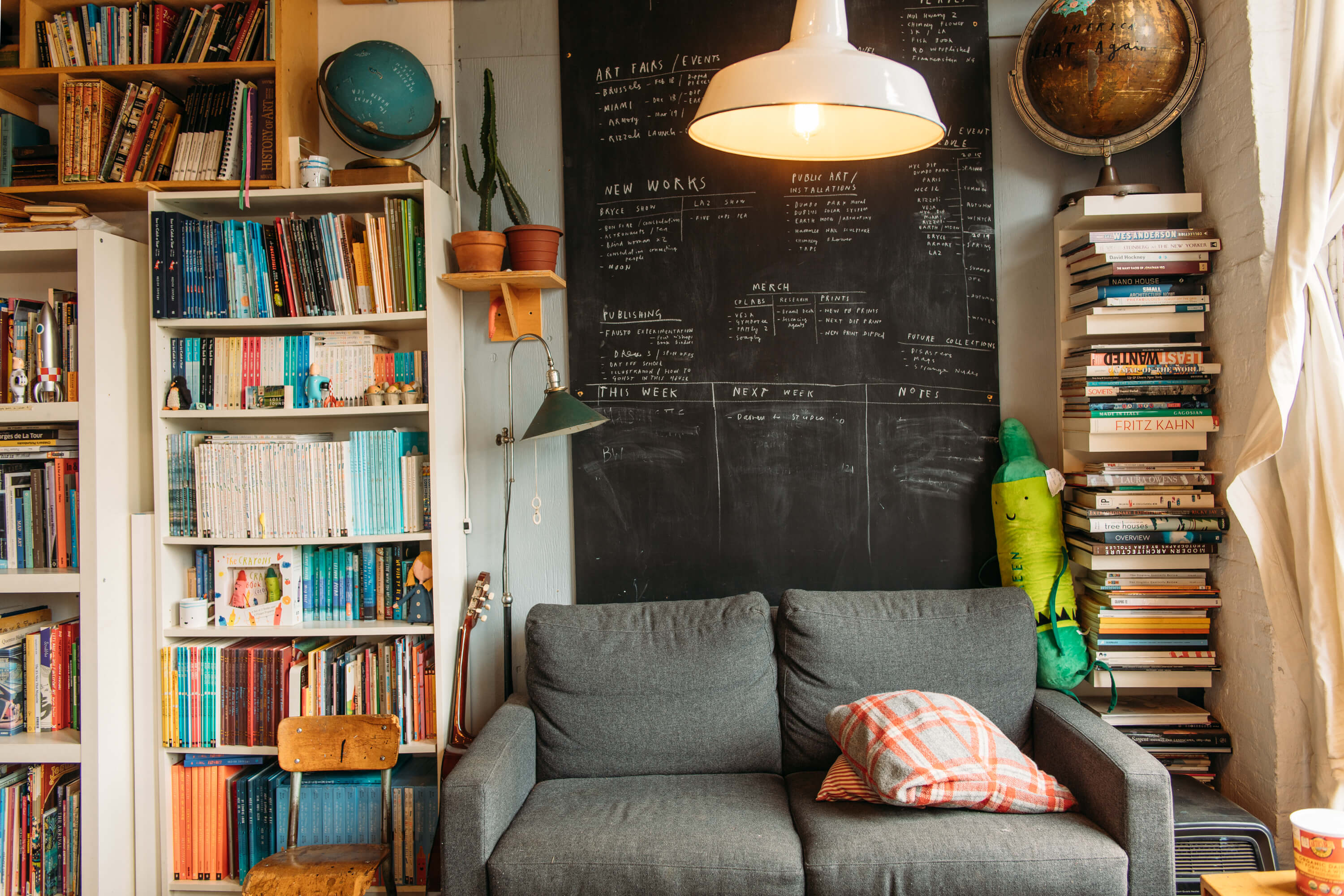 “I think it's helpful to not really know what's being published at the moment because you can be like, ‘Oh, wow, everybody's doing books with flowers that look like this’ or ‘Everyone's doing books with penguins.’ There seem to be trends that are either knowingly or subconsciously lifted from each other. Not paying attention can be good [for your work].”