COVID-19 #SmallBizSpotlight | After being closed for months, a sustainable womenswear shop in Fort Greene finds a new level of connection with customers. Published: April 13, 2021

One of the cool things about this column is that each business I discover often leads me to another. Sometimes it’s during the interviews, when somebody mentions a peer who they respect or admire in passing. Other times, it’s through my research (Instagram is an incredibly powerful tool for scouting indie businesses). I came across this week’s subject, the knits-focused womenswear brand Kordal Studio, in my preparation for last week’s, Rhodora — they’re next-door neighbors in Fort Greene, both committed to sustainability and reducing environmental waste, and, pre-COVID, began hosting community events together. Below, my interview with Mandy Kordal on running her eponymous label during the pandemic.


What inspired you to launch Kordal?
I've had the business for nine years this fall; we launched back in 2012. I had been working in the fashion industry for a couple of years, and it wasn't really resonating with me. There were really long hours. There was so much oversampling, overdevelopment, and waste, and a big disconnect from the actual making component. Honestly, it jaded me. I had worked on some hand-loom knitting machines in college, so I ended up buying one on eBay and just started messing around, working on swatches and samples and that led to it becoming a brand and a company over time.

Can you describe your overarching design ethos?
We want to create responsibly made garments that exemplify the possibility of sustainable design. It’s clothing that's meant to be lived in, more gentle on the environment, and designed with intention. At every stage of the process, we are really scrutinizing where our materials are coming from and making sure that the people who are making them are paid a living wage. And we're not trend-focused, so you can wear all of our pieces for a lifetime.

When did you move into the brick and mortar location?
We opened that three months before the pandemic. [Previously,] I had shared a studio with two other designers. I was looking around at different studio spaces and honestly the price for having some retail component wasn’t that different, and it's something I had been wanting to try for a little while. We were primarily working as a wholesale business, so selling to other boutiques or stores, and I wanted to move away from that and [become] more direct-to-customer.

Where do your knits come from?
We source a lot of our alpaca and wool yarn from Peru. We also work with an upcycled cotton mill in Guatemala where they take deadstock and factory floor scraps and shred and process those [scraps] into new fibers and then re-spin and weave them into new fabrics. The actual sewing production takes place at a factory in the garment district [in New York City] and then those two other locations in Peru and Guatemala. So none of our production happens in the [Fort Greene] studio: it’s more pattern-making, development, mocking up swatches, and things like that.

Who's on your team?
I have one employee, her name's Jia Yee, and she's heading up most of our woven production and design. I brought her on three years ago now. And before that she interned with me, so she's been there for a lot of the brand development, which is very cool.

Let's get into the pandemic. You opened the brick and mortar just a few months before the lockdown; had you started to hit your stride in that short time?
Yeah, definitely. Within the first couple of months, we realized that it was a good move on our part and that especially the location was perfect for us. It's a really community-based area and it was so nice to see the same customers coming in over and over and getting to know them and their families and knowing their style and taste. But also, that was February, March, [which] is a slower time for retail anyway. It wasn't a booming time, but we were settling in and getting into the swing of things.

How did the citywide shutdown impact your operations?
Well, that week was crazy. I think we shut down on Monday [March 16th]. I thought it would be a couple weeks. I really had no idea. And the store remained closed through July.

Ouch.
Yeah. On our design and production side, we had all of our production ready to ship from Peru and Guatemala, but then the border closed. The factory we work with in the garment district closed. We had to let our wholesalers know that we didn't even have a date of when we thought we'd be able to ship orders. Luckily — well, not luckily — a lot of the retailers we work with were like, Even if we can receive it, we can't pay for this right now because our stores are closed. Everything paused. We were lucky that our rent was reduced by half — I think that for a lot of people, having a flexible landlord is what saved them — and I was really lucky to get an EIDL [Economic Injury Disaster Loan] loan to help with things. But immediately, I had Jia go on unemployment. We brought her back on as soon as we could, but we just had to stop.

Did you apply for the PPP?
Yes, we were able to get a PPP loan and an EIDL loan.

That's great. How was the process of navigating the available aid and applications?
It was really frustrating. A lot of the forms were confusing for me, and I've applied for grants before and navigated a business for a long time. I can't imagine if you were new to this or maybe English was your second language. They weren't easy forms to fill out. And you have to have such tight records of your financial history. It was probably challenging for a lot of small business [owners] who are juggling being their own accountant on top of running their business and all the other things. And it was slow. Luckily, we had a little bit of cushion, but I don't think I received any of these loans until probably June or July.

You said the shop was closed through July; were you selling or producing anything in the interim?
We weren't up until mid-June when the border opened and we were able to receive our knits delivery. And then we had some past inventory, from fall/winter [that] we ran a big sale on. We never do 40%-off sales — it's not built into our business model — but these were extreme times. And then the new season stuff finally started to trickle in in June, July, and we sold things online as best we could. We ended up working with our upcycled cotton manufacturer in Guatemala to produce upcycled denim face masks. We launched those in ... Gosh, the timeline for me is a little fuzzy, but maybe in May.

Everyone I talk to is like, "Was it May, was it June? What is time?”
Yeah, it's all a blur. But at some point in the summer we finally received our spring production and some of our stores were able to take their orders. It was tough navigating that, too, because I'm definitely a softie … If there was a store that was like, "We just can't pay for it, we're closing down, we are in a really bad financial place," I didn't feel like going after [them], even if it was an order that they placed a few months earlier.

How were you doing emotionally while the store was closed? Did you have moments when you thought you might not make it?
It was really strange. In the beginning, I felt like we might not make it. But we had been moving at such a fast pace and we were always burning the candle at both ends ... It was almost relieving to think, If it doesn't work out, it doesn't work out. I could do something different. It'll be okay. We're healthy; that's the main priority.

When did it become clear that the shop would survive?
Once we received the two loans and our sale did really well, because we've been around for eight years and our customer base is really supportive and great. I think anybody who had the means to was trying to shop from small businesses. Our online business kept us afloat. 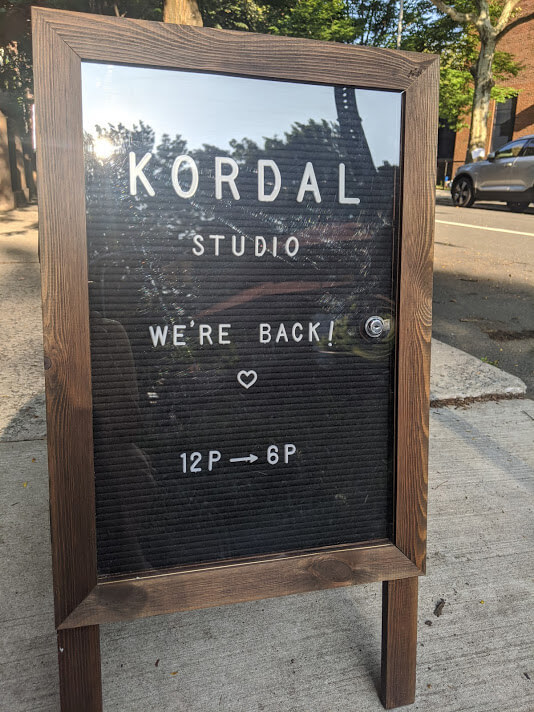 
Do you feel like your relationships with customers have evolved over the past year?
Yeah, definitely. Especially when we first reopened at the end of July ... We were having really real conversations. It was not just retail small talk. It was maybe the first time somebody had gone out and done something, or gone into a shop to try something on. It felt like a really big deal to just go do a simple thing and talk about what everybody had been through. It felt a lot more intimate. I feel like I got to know people on a more personal level.

What about with neighboring businesses?
I feel really lucky because we have Rhodora and Peckish next door to us, and they're both really great businesses. Everyone was just trying to support each other in any way they could. And we already do programming and different things with Rhodora, so we were keeping in touch with each other.

What kind of partnerships do you do with Rhodora?
Pre-pandemic, we were planning to host a conscious happy hour once a month. We had only done one before the pandemic hit … We had a friend of ours who works with Build It Green compost come and talk about how to properly compost, just a basic Q-and-A. We were going to do different textile and art workshops and lots of cool programming, but I think we'll get back there.

When people come in, do you sense any kind of awkwardness or tentativeness, as if they’ve forgotten how to shop in-person?
I would say it's half and half. It's funny. Some people come in and it's like nothing's changed at all and we'll have to remind them, "Hey, do you mind putting on sanitizer?" And for other people, they're like, "Is it okay if I touch things?" I'm like, "Yeah, that's okay. We steam the clothing in between." But I do think all of us are going to be slightly socially awkward for a little while.

Yeah, it's hard to unlearn that fear. Assuming the vaccine rollout continues relatively smoothly and things open up, what are you excited for in the coming months?
I’m excited to do more of our programming and workshops. I think that's so important and it's a nice way to gather with friends and learn something new. I'm also excited just to be able to hug people and connect in-person.