The source for shopping decisions, impulses, and inspiration
Outside Radicle Wine / Photography by Daniel Rampula
Shopkeepers

It’s almost April, which means it’s almost May, which is the month spring actually graces New York with its beatific presence. I’m daydreaming about getting a vaccine, going back into an actual office (finally a not-so-outlandish idea!), and lying on warm grass in Prospect Park with friends I haven’t seen in over a year. What about you?

This week’s feature is Radicle Wine, a natural wine shop in Clinton Hill that opened in late 2020 and is already a local favorite (I can attest to this from living in the neighborhood). Co-founded by friends, musicians, and hospitality industry vets Brian Heiss, Steven Reker, and Matt Nelson, the shop is out to dispel the elitist image of natural wine purveyors with a bevy of wine-adjacent programs to engage the community. Keep reading for my conversation with Brian.


How did you partner with Steven and Matt?
I met both Stephen and Matt at Achilles Heel. Stephen and I bartended and Matt used to DJ. Stephen and Matt are both very big musicians, so they've known each other through doing recording projects together. I left Achilles, took over the wine buying at a wine shop in Fort Greene, and hired Stephen. Matt was a Sunday pickup guy at this other wine shop, and that's where I got to know him better. Then we were all like, "Why don't we own our own thing?" That was early spring 2019. We formed the company and signed a lease on the space in June.

Why Clinton Hill?
I wanted to be in this space because I love this neighborhood and I love this corner. I live above Speedy Romeo [the beloved pizza restaurant next to Radicle Wine]. It's not that I was like, "Oh, there's no wine around here," because there are tons of wine shops around here.

You signed the lease in June 2019, but you didn’t open until Halloween of 2020; was the pandemic behind the delay?
Yeah, the pandemic definitely caused us to open months after we should have. One, getting a liquor license is very difficult and the process takes forever. The SLA [State Liquor Authority] is not the quickest thing, like any government agency I would imagine, but when you add on a global pandemic and furloughed employees and all that stuff, it took exponentially longer.

How did you manage without any revenue for so long?
It was just hustling. The build-out was done and we were essentially ready to go in January [2020]. We were anticipating being open on April 1st or May 1st, and then everything ground to a halt. I was working out stuff with the landlord, like, "Hey, we can't pay rent." He gave us a free month and then didn't immediately charge us, but we racked up a big tab that we owed him. I was up in Rochester with my parents during most of the pandemic just because it was too much for me to look at my empty shop and be like, "Is this thing going to happen? Is this going to come through?" So it was a really, really tough 2020, but it ended up nicely because we were able to open in October.

At what point did you feel confident that Radicle Wine was going to happen?
We got our liquor license at the end of September, and I have a great lawyer, Caitlin Robin, who has kept me grounded and was like my business therapist throughout this. She used to own a wine bar, so she understands the pressures and the ins and outs of navigating the state liquor authority. And she went to bat for us. So once we got the license, it was just a matter of trying a whole bunch of wines to figure out what we wanted to do for our initial inventory. There was one day where I got 200 cases of wine and both my partners were unavailable, so I was in there putting wine away for hours and hours and hours, but it was so exciting because we knew what was happening.

Do you have any staff beyond the three of you?
Not right now. Obviously, we were planning on being open earlier, so the bank account was pretty low when we first opened. For the first month of our existence, we didn't pay ourselves just to get the business back up to where we thought it should be when we were opening. So there's no staff right now, but I would love to get to a point where we can hire some people. It's a full employee-owned business. I set it up so that anyone who works there, even if it's someone helping out with moving wine around or part-time employees, they all get a cut and they all have a say. Because I've been burned in the past, and I think it's the right thing to do.

How do you divide and conquer?
Stephen is really helpful with design; him and I put together the concept and the look of the shop. Matt has a ton of wine knowledge and so him and I have been spearheading the buying. I trust him completely. If he's like, "Hey, we should get this," even if I haven't had it, I'm like, "On it." Overall, I have the most responsibility, but that's how we set it up. Those guys are both musicians, and so we wanted to set it up where it was sustainable if they were on tour, which obviously isn't happening right now.

The shop has a very distinctive aesthetic of pastel colors and bright lighting. What’s the thinking behind that?
Wine is this weird thing; it can be a very elitist product. I hate walking into wine shops that are full of dark wood. That sucks. We wanted to be bright and airy and open and approachable, so that's why there's no dark wood, and barely any wood in the shop at all. It's got pink walls. We have our door open whenever we can. There's a little seating area so people can come in and hang out. We have a full basement, and since we’re all musicians, we put a stage and a full band set up down there. There's some wine storage down there too, but we were hoping to do some low key shows and stuff like that down in the basement, [though] we definitely can't do that right now. But hopefully moving forward.

I've seen some guys playing music outside your door; is that a formal partnership?
So the main two guys are Henry and Ray. I love those guys. They’re just down the block, and I’ve known Ray for so long. He was like, “Hey, can we set up and play?” I was like, “Absolutely.” They play out on Saturdays, usually 1:00 to 5:00 or something like that. Most of the stuff that they use is our equipment, so they don't have to lug their stuff all over the place. They put out the tip box, but we also give them some money. I want the shop to be community-oriented. And we've seen that ethos be recognized: after one week, we already had regulars. A lot of people in the neighborhood know us, and we know a lot of their names and even dog names. The dogs in the neighborhood love it, too, because we have treats for them. If you look at the Google reviews, the main theme is that we have dog treats.

You also partner with local record shops. Can you tell me more about that?
Sure. Like I said, we're all musicians, so the music comes through everything. And we've all — I hate saying this — we've all deejayed in the past. [Laughs.]

Why do you hate saying that?
Just because it sounds so … Brooklyn-ey.

Fair enough. [Laughs.]
After we signed the lease, the first thing I said was, "All right, what's the sound system going to be?" So we found an old Marantz and, of course, we have an SL-1200 turntable, which is the workhorse. We love playing records, and we know a lot of the owners and employees of record shops. And record shops have been struggling throughout the pandemic, so we set up a little record store pop-up. [The record shops] bring over a whole bunch of records and we get to play them and then everyone can buy them. There's a QR code for Venmo, so we're not holding money for them or anything like that, which is great because I don't want to do that.

You also have a mixtape exchange … How does that work?
You make a mixtape, drop one off, pick one up. We wanted to do mixtape exchange parties, but obviously can't, so we just have the box there. A lot of people are like, "I don't have a tape player," but that's cool because you can go on Spotify, make a playlist, and then print out a QR code and drop that in. So there's a number of different mediums that can be [exchanged].

You’ve partnered with Soup Shop, the weekly soup pop-up that I profiled last week. How did that come about?
Ken [Farmer, who launched Soup Shop] sent me an email about it and I was like, "That sounds awesome," because I've worked in restaurants for so long and I'm trying to help out in any way. It's funny [how quickly] it took off. The first week we had 14 orders. The second week we had 49. I was like, "Ken, man, I can't handle any more than that," because our shop is small, it's like 375 square feet. But Ken was able to get a couple more [wine shops] to sign up, which distributed it more. Whatever we can do to help. I have told you about the difficulties of the pandemic for our shop, but at the end of the day, wine retail is up right now. I don't want to dismiss that, so we want to help out where we can, with our friends and the hospitality industry at large.

Do you think you'll be able to hire some more people soon?
Yeah, we're almost there. Working for free for a month and then having the response that we have had from the community has gotten us basically back up to where we initially thought we were going to be. The community has been lovely, so warm and welcoming to us. They're excited that we're here. We're excited about where we are. We have stamp cards where you get a stamp for every bottle and then after 12 stamps you get a free under-$20 bottle, and we've had over 100 cards returned already. That shows that it's not just random people coming in, it's our neighbors, which is what I really wanted. We will start doing shipping and maybe we’ll expand our delivery zone, that's all phase two, but the first and most important thing that I wanted was that the community supports us and we can support the community. 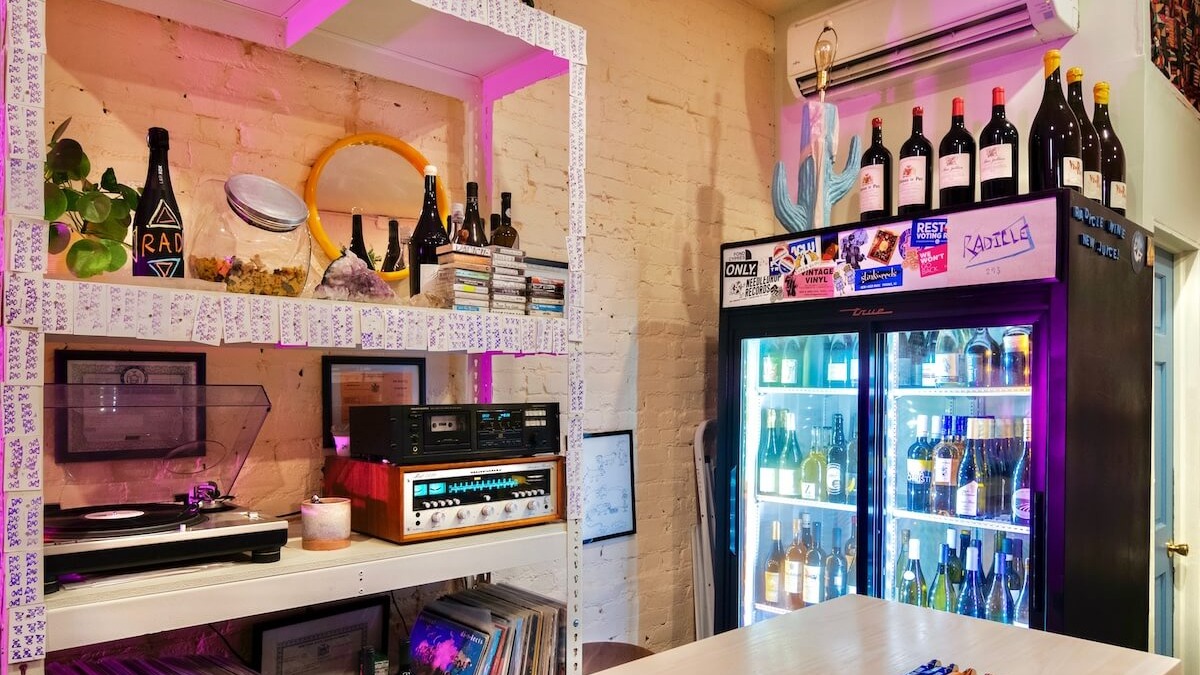 Completed stamp cards behind the register / Photography by Daniel Rampula

You’ve managed to do a lot of community-based programming within COVID restrictions; what are you most excited about launching once they’ve lifted?
I have this big farm table in the basement of the shop right now. Since we’re a one-story shop, we’re going to put it on the roof and start doing classes and long-format tastings and maybe even a dinner party or two. I'm also really excited about having the reps that sell us wine come in, open stuff up and let people try things.