Molly Young and Teddy Blanks Have “A Lamp Guy”

To turn a 100-year-old former silver-plating factory into a stylish modern living space, you have to get a little creative. Teddy Blanks and Molly Young were just the people for the job. Blanks, a director and partner at CHIPS, a Brooklyn-based graphic design studio, moved into the 1,400-square-foot Williamsburg loft in August 2009. Young, a freelance writer and co-author of D C-T, a William Steig-inspired illustrated ode to New York City, joined him in early 2017.

“You can see where the old walls were,” Blanks says, gesturing to marks on the hardwood. “The windows didn’t let out into the common area. It was a great layout for two roommates who wanted gigantic bedrooms, but we needed a large open space.”

Today, the apartment is an eclectic and evolving mix of the couple’s unique sensibilities—prop furniture from online estate sales, an animal-print sofa found at a Virginia antique store, some 80s modular shelving Young assumes once graced the room of an 11-year-old boy. Most impressive are Blanks and Young’s clever solutions to the space’s architectural quirks, from a specially constructed tapered bookshelf that squares off a diagonal wall to a giant chalkboard art piece that also protects the modesty of anyone showering on the other side of a glass Corona bottle bathroom wall. (That was, um, there when they moved in.)

“I trust anything that Molly brings into the apartment,” Blanks says. “Everything she’s brought in has improved it vastly. I come home sometimes and everything’s been rearranged. I’m always happy to see whatever’s new. A lot of the big touches—the giant wall things—are me, and a lot of the thought-out smaller details are Molly.”

Blanks and Young took Quiddity on a tour to tell the story behind some of their favorite pieces. 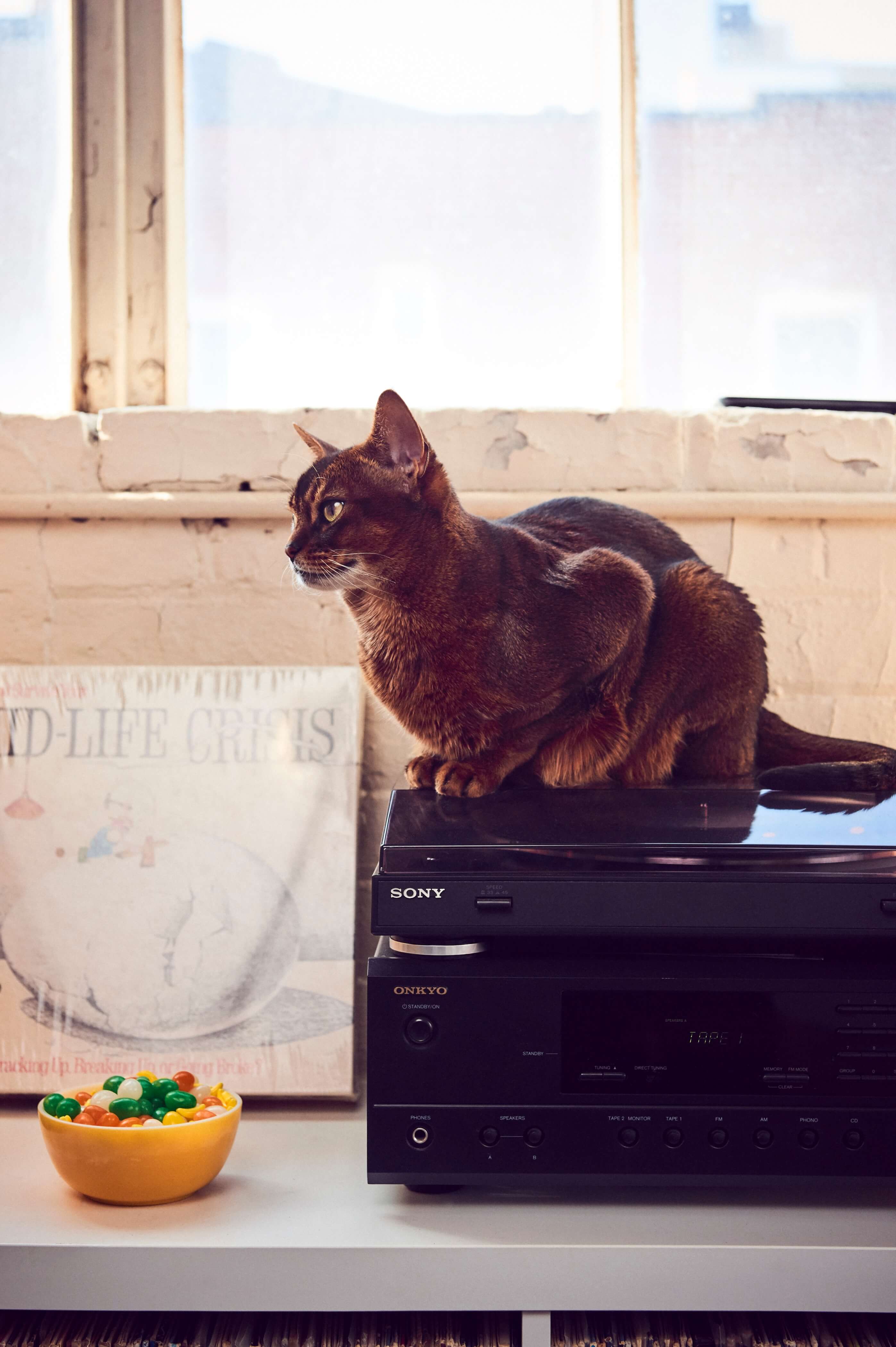 “She only behaves when she’s having her photo taken,” Blanks says. “I wake up in the morning with scratches on my head. She hates me so much.” 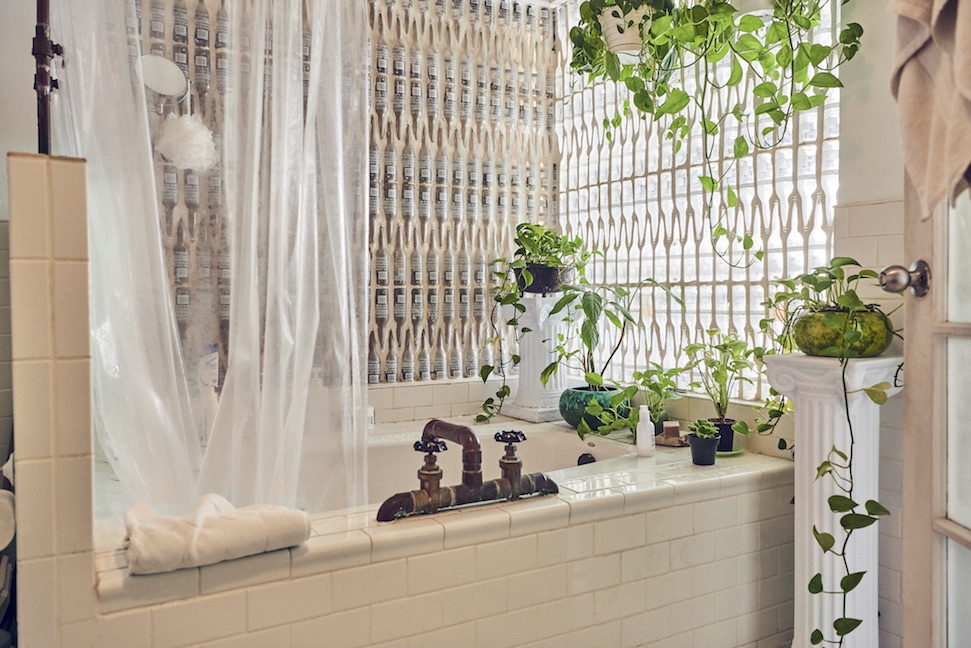 “This installation of Corona bottles in the shower was here when we got here. It’s so ugly that we just have to pretend that it’s a Dan Colen art piece or something,” Young says. “We decided to take this weird sink column as our point of inspiration and do an ‘80s ancient Greece theme. Teddy pulled these Greek statue photos from the Metropolitan Museum of Art’s online archives. There’s one of Caligula by the toilet, of course. We got these fake columns from an events website. They’re like $10 each and kitschy and fun. And we got these fake marble floor tiles from Home Depot.” 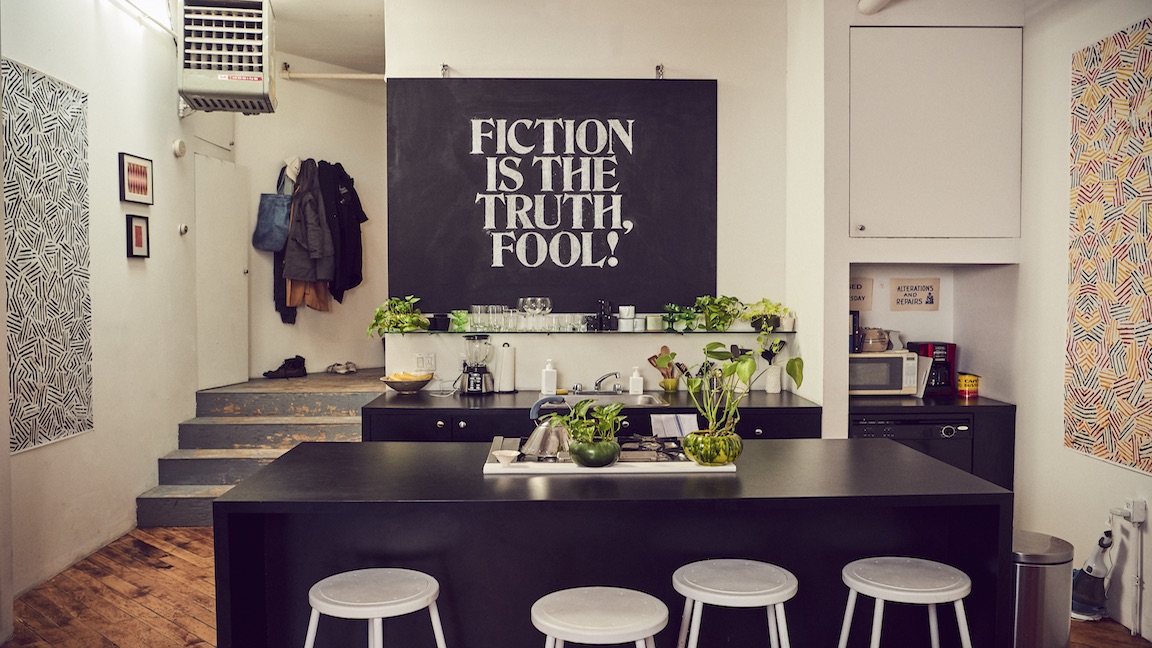 “The giant chalkboard is there so you don’t see someone showering,” Young says.

“When I first moved in here, my roommate, who was also my business partner, came up with this idea of putting a big chalkboard here,” Blanks says. “Through the years, it’s cycled through a few different sayings. It’s stenciled. I designed it on the computer, Molly provided the slogan. It’s a quote from John Waters. Taking the chalkboard down was the hardest part of the process, because it’s so goddamn heavy.”

“The quote has taken on a sinister cast in this post-truth era, like a piece of propaganda,” Young says, laughing. 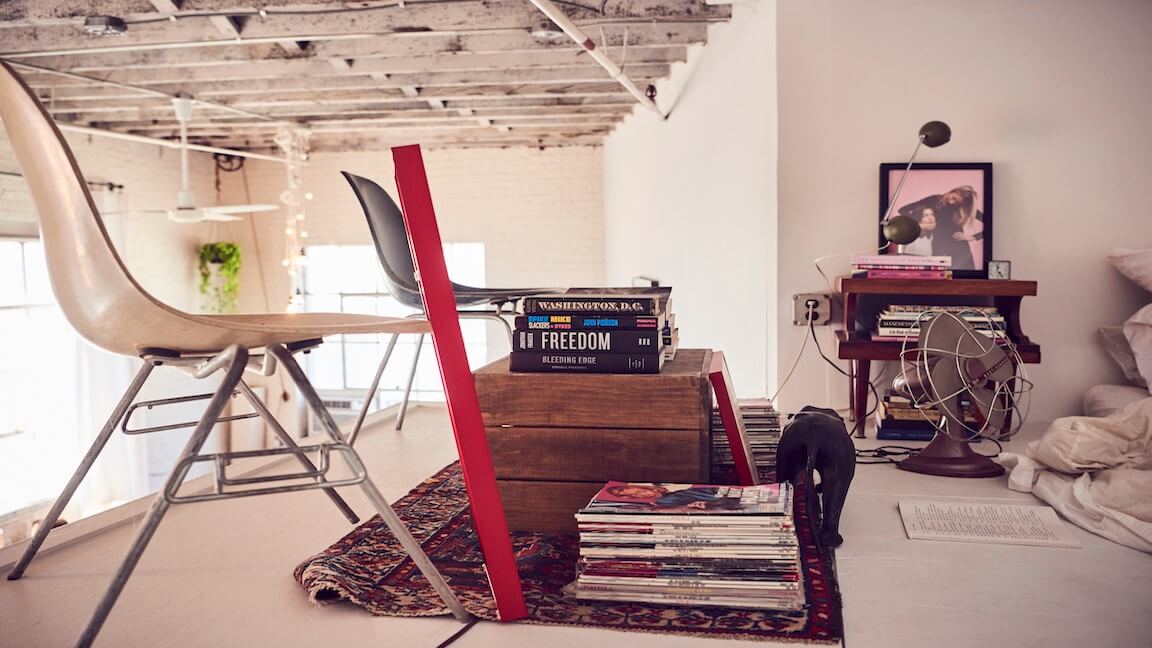 The apartment has a lofted area that doubles as a guest room and, as Young explains, storage. “It’s a space for a lot of my old Spy magazines that didn’t have a home,” she says.

“And books that we wanted to hang onto but that weren’t attractive enough to make it in the main collection,” Blanks explains. “And family photos, and just a place for friends to crash if they’re passing through town. My mother used to stay up there years ago, but she sleeps on the couch now. It’s a climb. Also, the ladder is pretty uncomfortable if you’re not wearing shoes. My partner Adam found this ladder on the street; some construction site was throwing it away.” 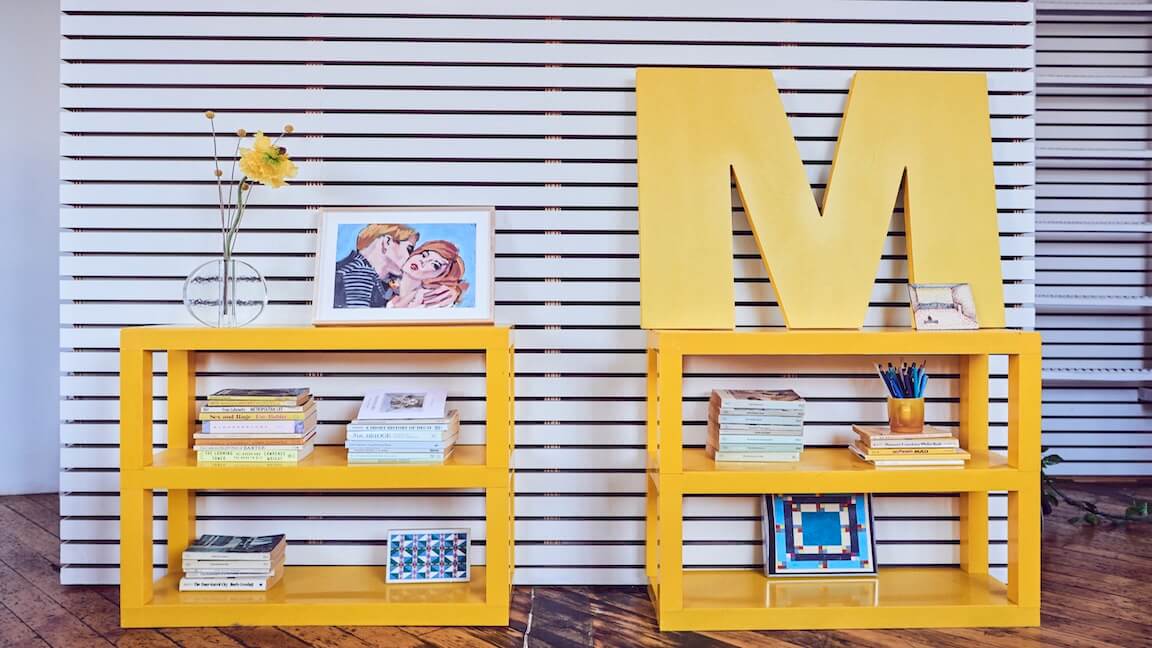 “That’s all Molly,” Blanks says. “She just decided that yellow was the thing.”

“Do you remember a few years ago when pink was everywhere? I decided, ‘It’s not pink, it’s going to be yellow!’ So I went all in on the yellow plastic furniture that I got on eBay—like what an 11-year-old boy had in his bedroom in the ‘80s.” 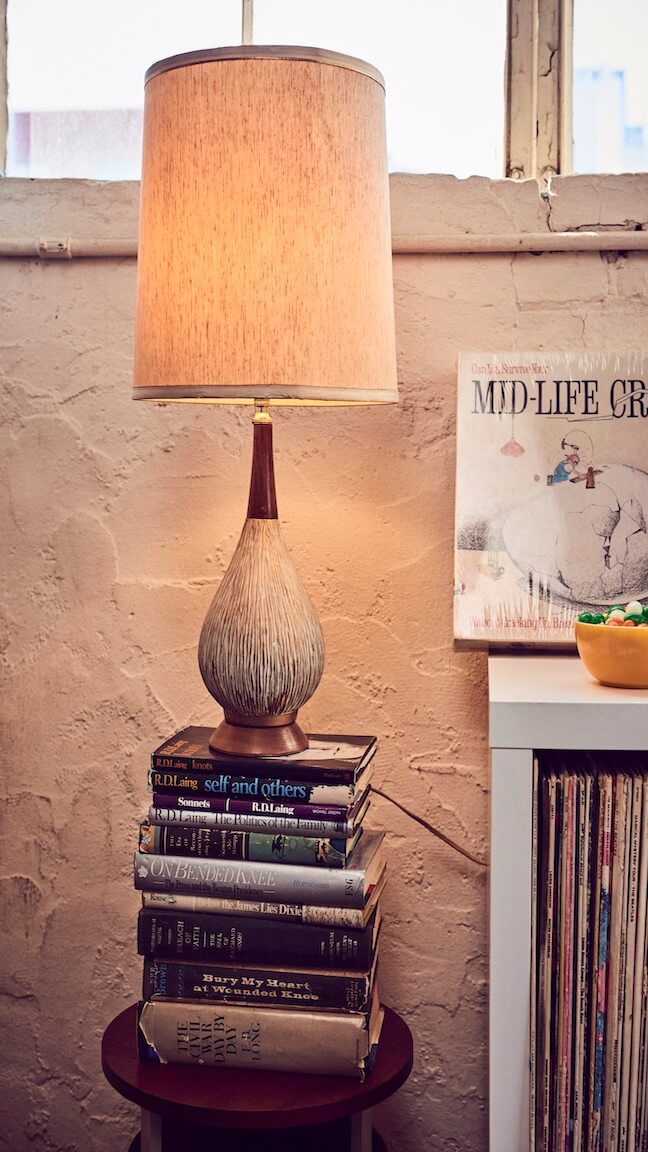 “We buy a lot of lamps on eBay,” Young says. “There’s this guy, Ray the Lamp Surgeon. He’s incredible.”

“You call him and in the next day or two he’ll come over and look at your lamp. Sometimes he’ll fix it on the spot. Often, with these eBay purchases, maybe the wiring is European so it doesn’t work, or there’s no bulb that works, or sometimes you get it and it’s just broken.”

“An actual tradesperson! He’ll do all this work, and then he’s like, “Thirty-five dollars.”

“His voicemail is like, “Hi, I’m the Lamp Surgeon—I’m with a patient right now.” 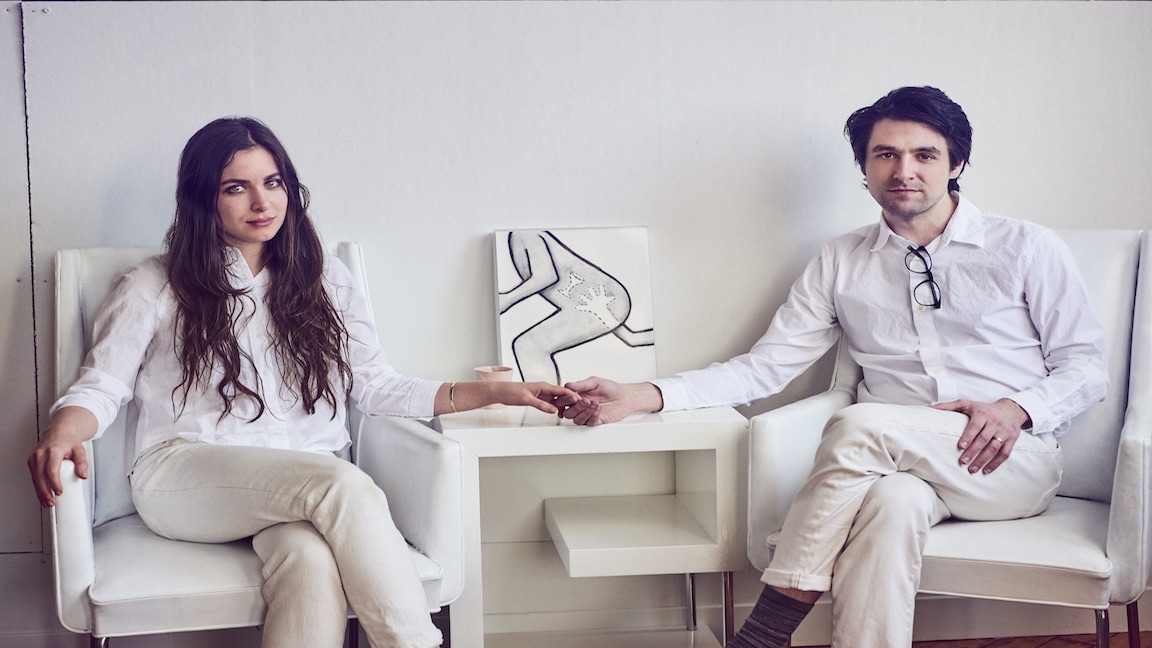 “My uncle was a crazy, longtime art dealer-collector, so a lot of this is stuff I bought off him. Ever since I was a kid, this was my favorite,” Young says with a hearty laugh. “When I finally, you know, had 75 dollars to buy it off of him, I did. The artist is Philip Knoll.” 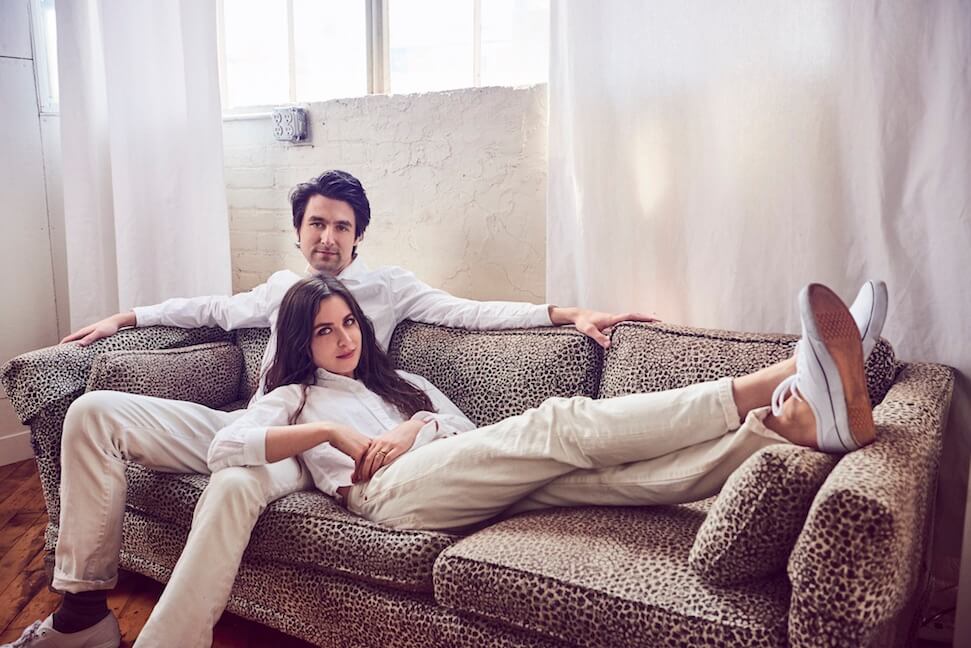 “I got this couch at an antique store in Richmond, Virginia. I just loved the print. It had been reupholstered this way. The design is pretty modern, but it had fringe all across the bottom. At some point, during a party or something, one of the legs got broken, so now it sits on a cinderblock. There’s always a slight tilt.” 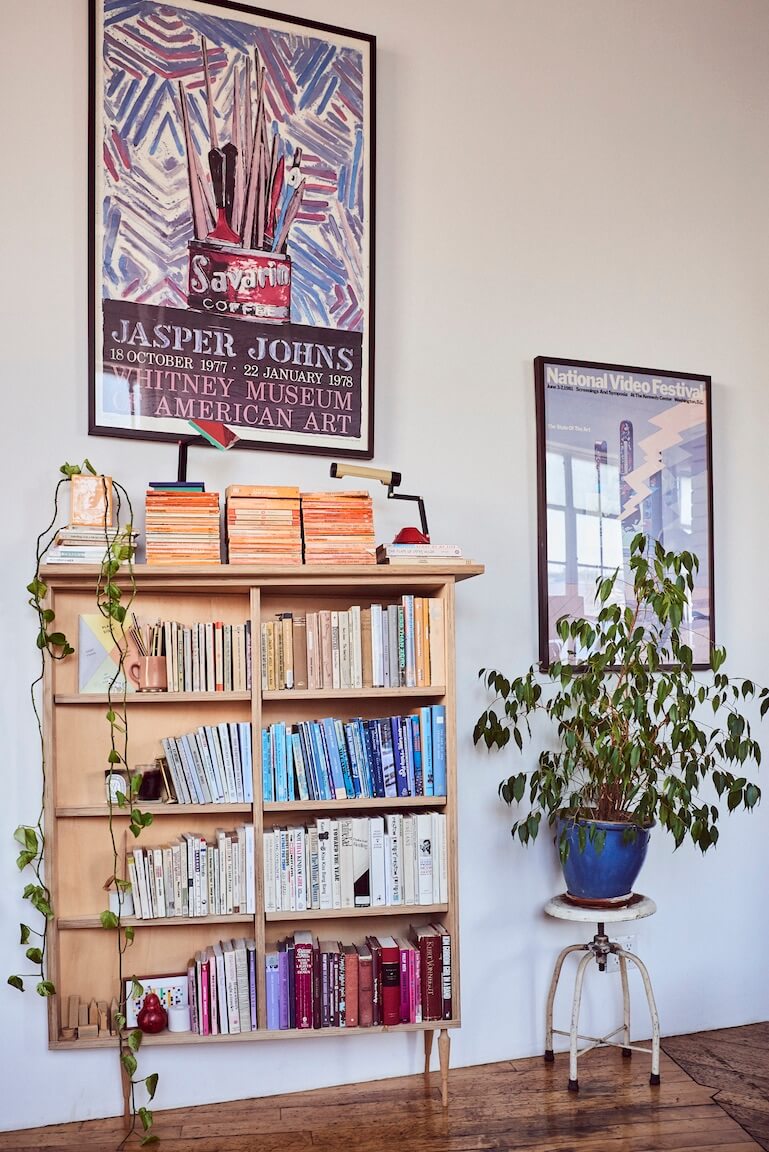 “This wall is an optical illusion. It’s not parallel to the other wall—it’s diagonal. A really talented designer friend, Mark Grattan, came up with the idea of squaring off the room by creating a wedge-shaped bookshelf,” Blanks explains. It becomes smaller and smaller and gradually becomes un-functional. I love that it’s affixed to the wall but also on these tiny legs that look like they couldn’t support it.”

Young arranged all the books. “The color-coding keeps me organized,” she says. “You know, like, when you look at a book and you remember a quote and you know where it is on the page visually? It’s like that. I know where my books are by the color of the spine. I feel like it’s a trendy aesthetic thing now, but it’s very functional for me, actually.” 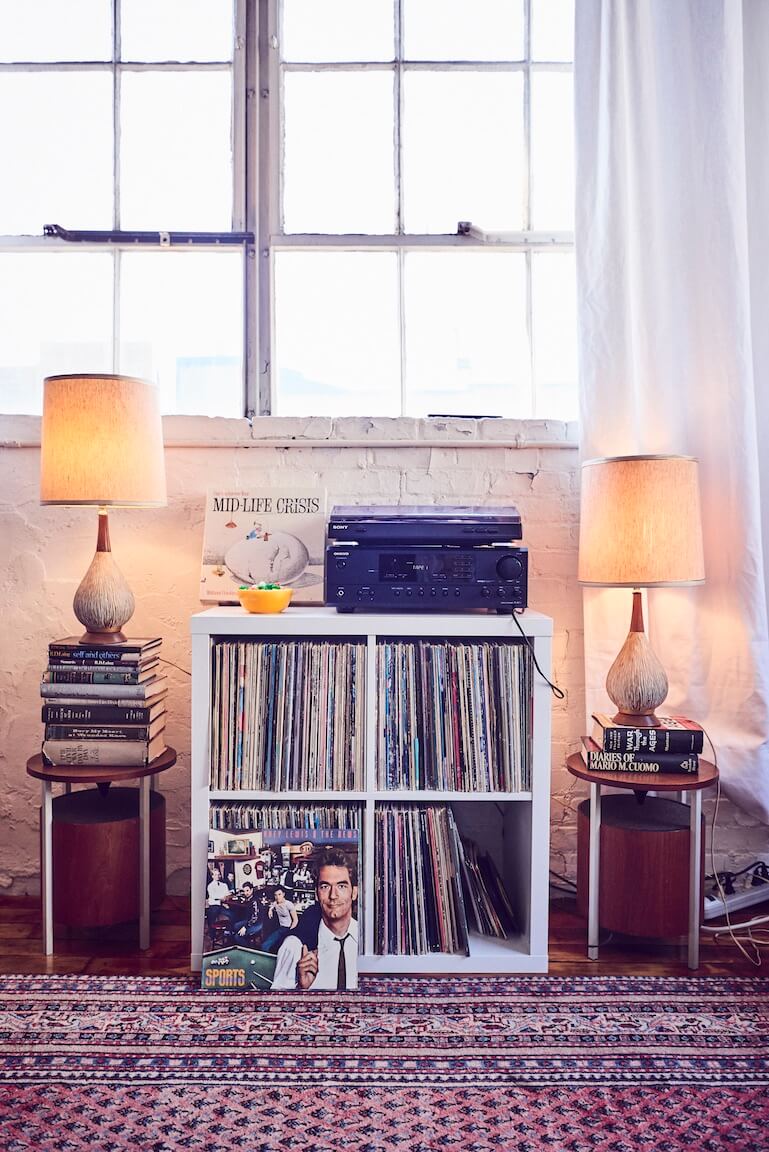 “This used to be a music wall. It slowly became a music corner. I like it better like this, though,” Blanks says. “I got rid of a bunch of stuff. It’s down to stuff I really listen to. These speakers are fairly recent. They also function as coffee tables. I got them on Craigslist. They only sort of half-worked. You can get broken things very cheaply.” 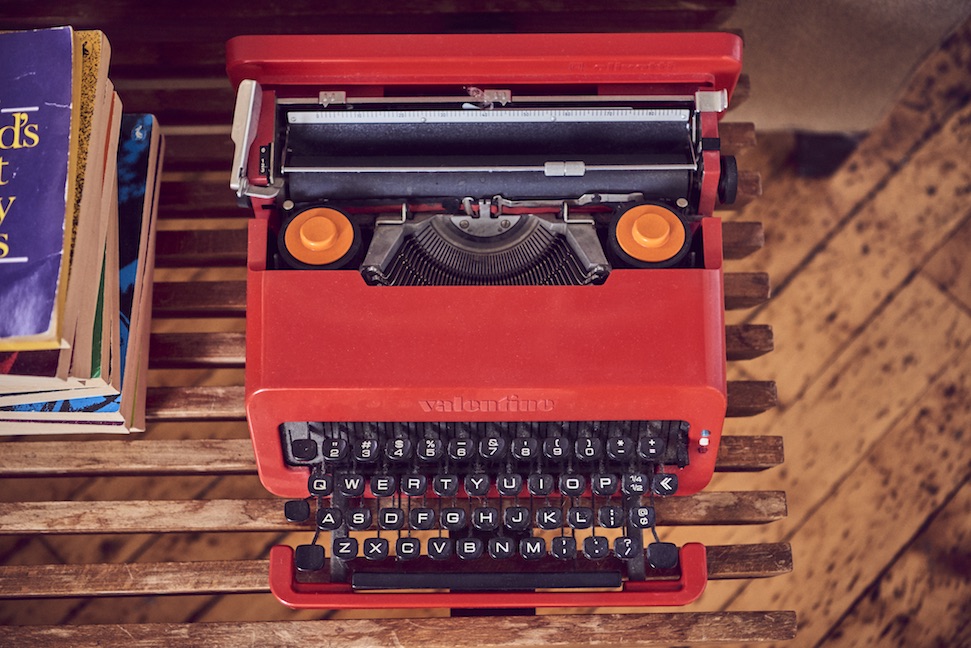 “I’ve had this typewriter for years. Ettore Sottsass designed it for Olivetti in the Sixties. He had a big exhibition at the Met Breuer recently,” Blanks says. “It’s the one thing of his you can get affordably—they pop up on eBay all the time.” 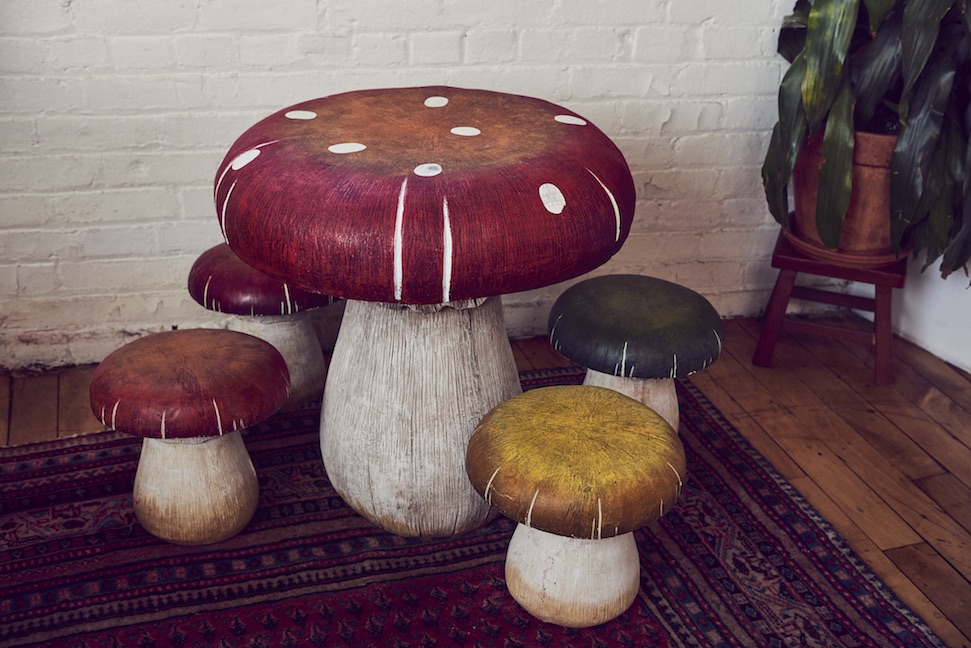 “Another budget find. There’s this website called Everything But the House,” Young explains. “It’s basically online estate sales. Someone will die, or just want to liquidate their possessions, and they’ll photograph everything in someone’s house and put it up for sale. It’s like really cheap, except for shipping, so the trick is to find sales that are happening in New York City. An interior designer had these plaster mushrooms made for her kid’s room. It was like $15 for each of the little ones, and 20 bucks for the big one. I just drove to a storage unit place in Harlem and picked them up, and now they’re here. Not comfortable…purely ornamental.” 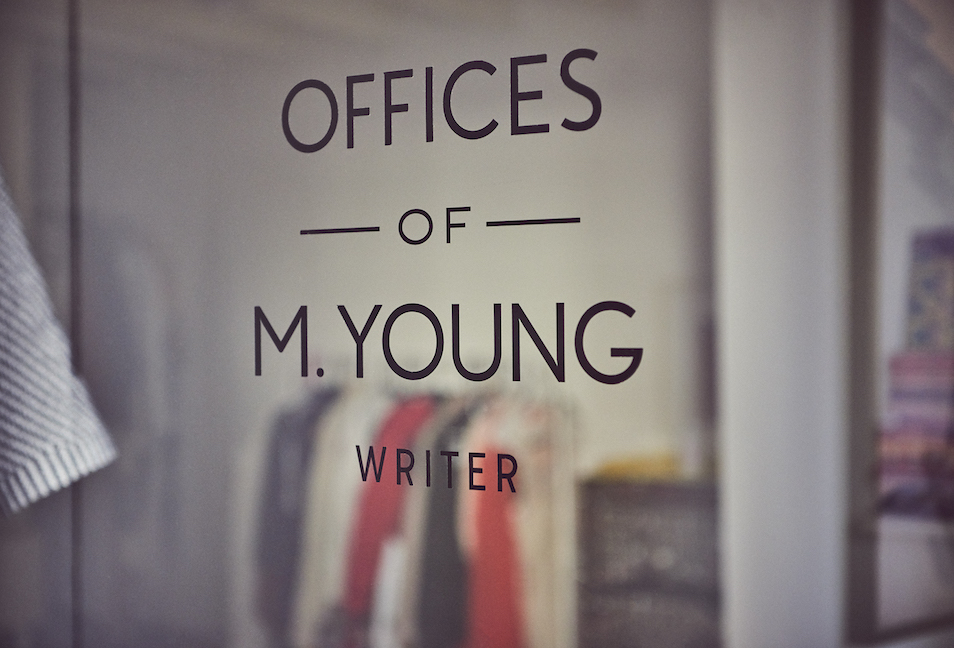 “This was my dream as a child. Basically, a large portion of my aesthetic was informed by Sesame Street and Animaniacs—things that were ingrained in me as a child. I’m pretty sure this comes from Animaniacs, the idea of having a detective door.”

“She sent me some references, and I did the layout and sent them to a vinyl letter printer, and they cut them out,” Blanks says. “Vinyl letter installation is pretty simple. You just put the sheet here, then rub it on with a credit card, then use an alcohol-water solution to spray on it, then you peel it off and the letters stay.”

“It’s number 904, implying that there are many other offices.”