The source for shopping decisions, impulses, and inspiration
Photography by Gabriel Zimmer
Shopkeepers

Meet the Man Who Sells More Headphones than Just about Anyone

Mark Steinberg is the guy to listen to at Manhattan superstore B&H. Published: April 13, 2018

When it comes to consumer electronics, Mark Steinberg is a lifer. Growing up in 1960s Westchester County, New York, Mark’s uncle worked as one of the first TV repairmen of the region. Obsessed with breaking stuff apart and putting in back together — at least in theory — Mark became his protegé and began stripping old, junked up TVs for vacuum tubes. As TV ownership became increasingly popular throughout the 70s, Mark had picked up a lucrative hustle with one specific competitive advantage.

“I had no overhead. I was working out at my parents’ basement at age 11” he said. “Riding my bicycle, I would find old tubes that worked on the sidewalk, and then I would test them down at the local drugstore.” The tube tester, it should be noted, was also free. (Mark has no idea how much the bike cost.) 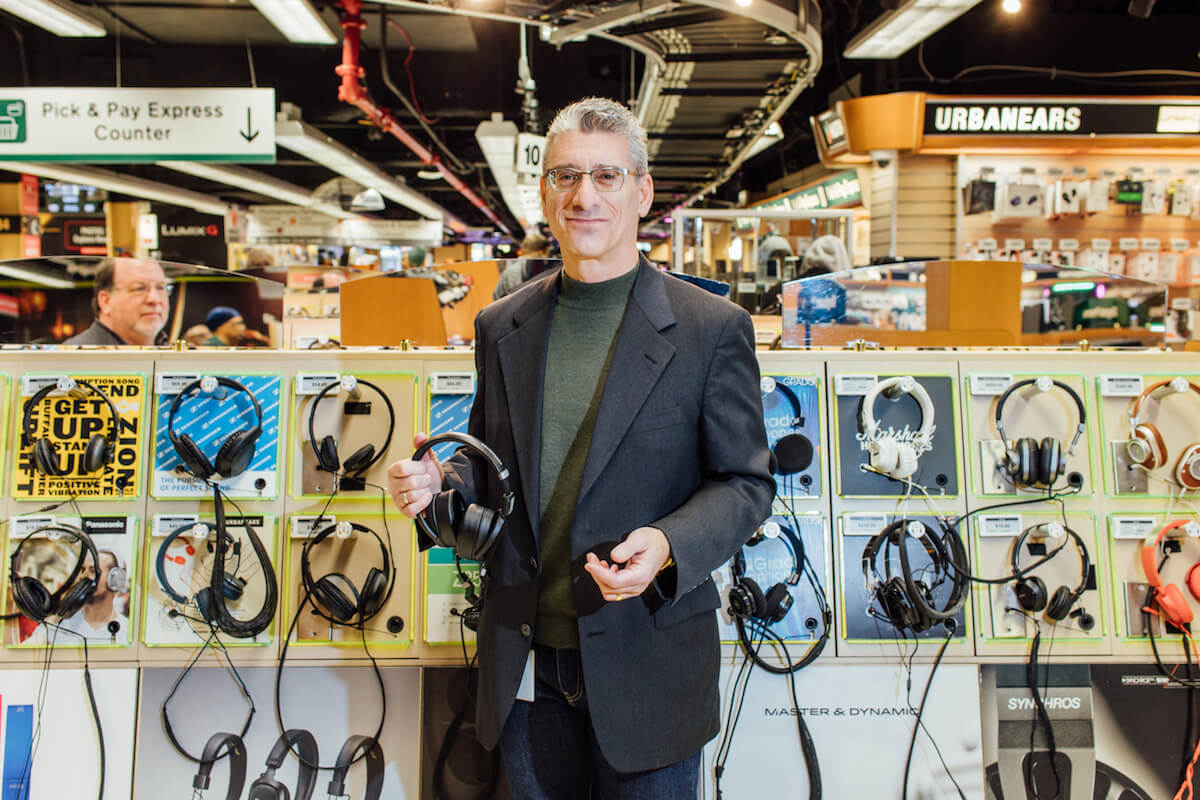 This aptitude for consumer products and retail eventually led him to RadioShack, where he quickly ascended the corporate ladder. During that same period, Steinberg maintained his side business, working as an installer of high-end stereo equipment and cabinetry in tony New York and New Jersey neighborhoods. After Radio Shack, Mark moved onto regional chain Nobody Beats the Wiz, with designs of eventually exiting the retail world for good.

Until, one day, he got an interesting interview request from an old manager from Nobody Beats the Wiz, who was now working at B&H.

“This was 2002. B&H wanted to expand,” Steinberg says about the Manhattan-based electronics superstore, a 70,000-square foot institution that is the largest non-chain store in the United States. (On an average day, about 5,000 people visit the store and about a half million people visit the online store.)

“Back then, Best Buy wasn’t really in the city yet. None of those big box stores had taken hold there. There was a lot of competition and they were asking, well, how can we differentiate ourselves?”

To answer that question, B&H landed on a burgeoning new sector at the time—consumer pro audio, or professional quality technology available to the public. Since that time, Steinberg has become B+H’s go-to source for inventory insight, serving as the company’s customer service lead and an expert on everything wireless. And when it comes to that technology, there’s one product that brings hundreds of people into the store each day—headphones.

“I came to B&H in 2002, and since then, we have seen headphone sales quadruple at a minimum.” Steinberg says. “We went from having 10 product skews to hundreds of skews of headphones and earphones. Right now, we have 535 products in BlueTooth headphones and 416 in stock. And that’s not even the entire wireless category.”

At B&H, online sales began to outnumber in-store sales around 2010. Nowadays, they’re many times over what the store sells. But that hasn’t dulled B&H’s competitive advantage: expertise. 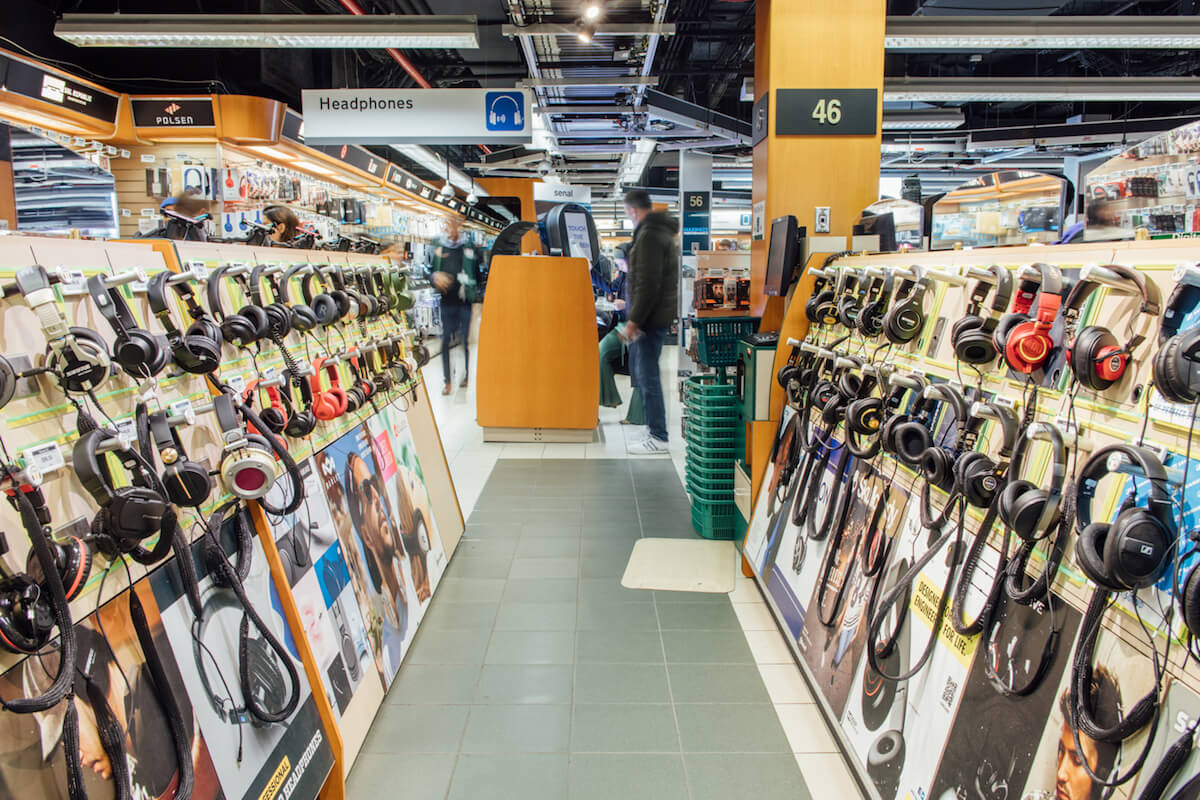 “We’ve proved over the years that it’s not just selection and price,” Steinberg says. “We have people who come into the store asking for a price match and we don’t play the price game.”

Since no one at B&H works on a commission, Steinberg champions an honest approach, agnosticism to brands and consumer freedom—at B&H, there’s a huge working display wall featuring a giant range of wireless headphones to try. And since no two sets of ears hear the same way, trying is more or less the only way to walk away satisfied.

“The wall presents as much opportunity as it does confusion, because there’s just so much to look at,” Steinberg says. “But we’re there to point you in the right direction.”

Given that the price range on wireless headphone products ranges from about $40 to tens of thousands of dollars, there’s a ton of tech to consider—or ignore.

“Some people say they want noise cancelling but they don't understand how that works—it’s not going to drown out everyone else’s sound in an office, for instance,” Steinberg says. Some specialty headphones include waterproofing, a cool-sounding feature that doesn’t exactly work like you think it might.

“Radio waves don’t work under water—I get that question at least three times a day.” Steinberg says. “I think you’re looking for sonar.” 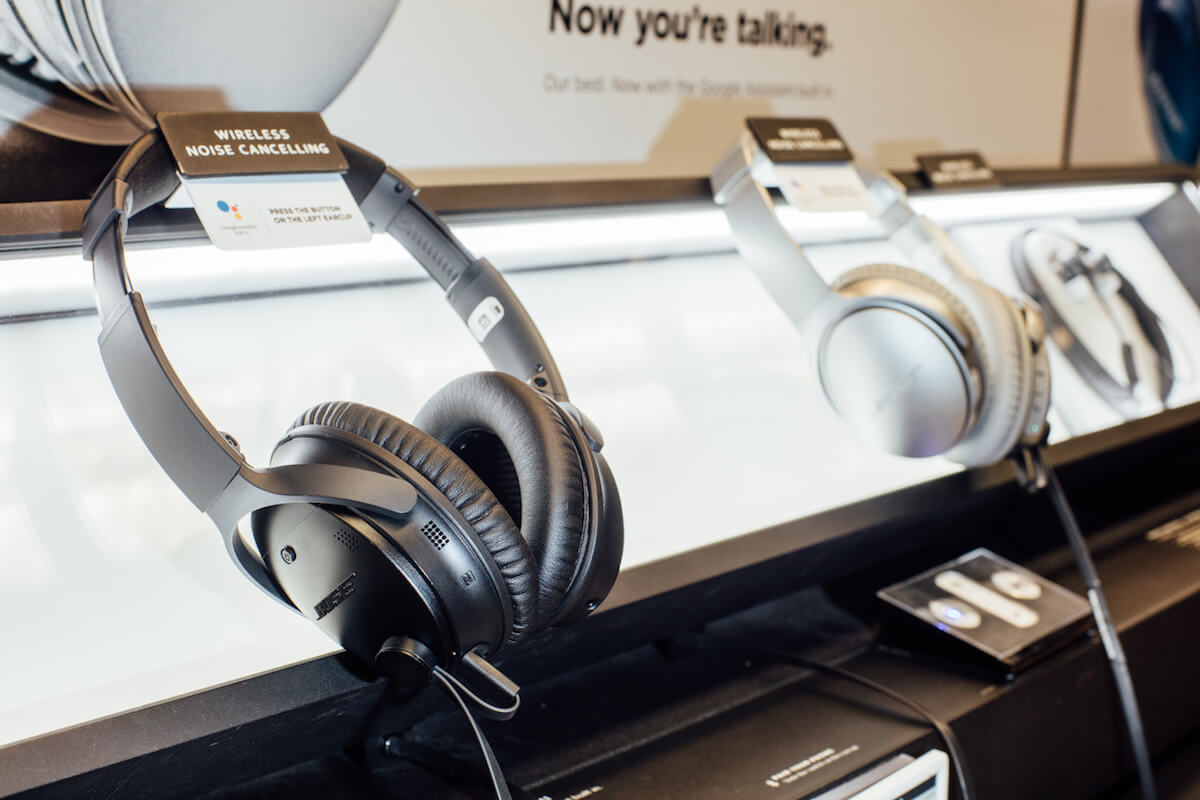 While familiarity with a machine called a “tube tester” means that Steinberg came of age in a simpler time, Steinberg has his hands in B&H’s buying program and his job requires a familiarity with every audio product they carry. Like with the B&H shopping experience itself, the volume of choice can be overwhelming. But Steinberg’s been around the block with the headphones product.

“Years ago, I went to an Elton John show and it was one of the first Madison Square Garden concerts,” Steinberg says. “Elton John's drummer, Nigel Olsson, is sitting there with these big cans on his head. They're KOSS PRO4A headphones. And I said, I’ve got to have them.”

“I wore these things for years even though they were painful. They were small speakers with a head strap. They weighed like two and a half pounds, and they would squish your head like a grape.”

“Now comfort is really important,” Steinberg says. “All these companies have really listened to their customers.”

Steinberg and B&H’s goal is to listen, too.

“This is our mantra. The goal is B&H is that when the customers leave, they should be happy,” Steinberg says. “Not saying it's easy to get to that point. But at the end of the day, everyone who works for B&H, when they walk out that door, they should be happy with the whole experience.”

“We might not make the sale today, but the customer is happy. They got an honest response and someone is listening to them.”