The source for shopping decisions, impulses, and inspiration
Photography by Jai Lennard
The Goods

A day shopping through North Brooklyn with writer Laura Lane and her husband, the artist Nic Rad. Published: April 02, 2019

For expectant parents like Laura Lane and Nic Rad, differentiating nursery essentials from the glut of baby-centric products on the market—the ones that end up shoved in a closet or ultimately re-gifted to friends who might find use for a crumb cap or pee-pee teepee—can be tricky. 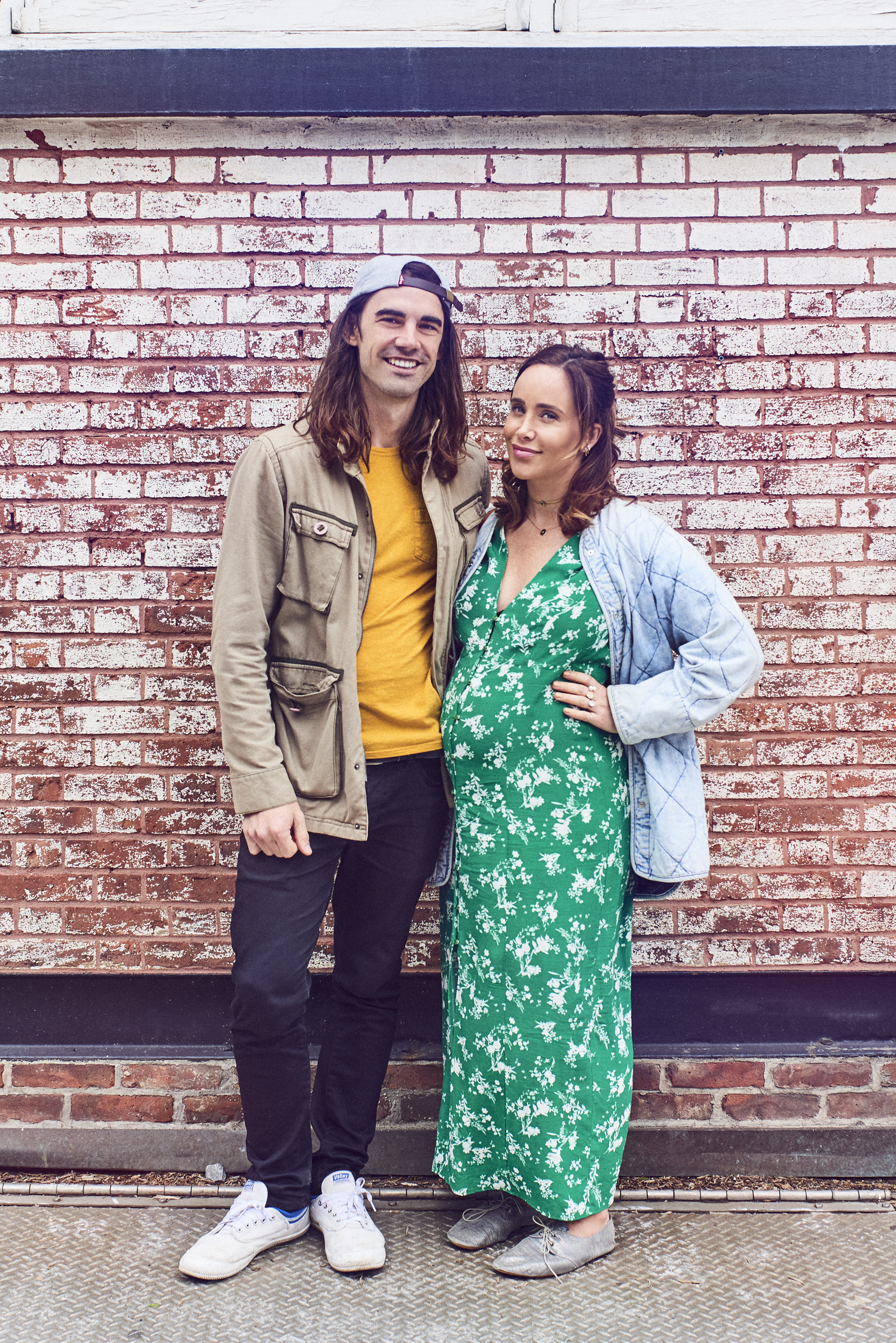 “People tend to give you advice when you tell them you’re having a kid,” said Rad, a Cleveland, Ohio, native and artist who’s lived in Brooklyn for a decade. “A lot of times that advice is, ‘You don’t need 60 percent of the stuff you’re buying right now.’”

“Women give you the opposite advice!” countered Lane, a comedy writer, performer, journalist, and author originally from Southern California. “Like, ‘You think the baby needs two towels? He needs six!’ I’ve been passed Excel sheets: ‘You need everything on this list times two!’ We’re probably landing somewhere in the middle.”

The couple met eight-and-half years ago at a holiday party—Rad had been on a date with one of Lane’s former roommates—and, according to Lane, they’ve “pretty much been together from that second.” They got married in May of 2015 and recently renovated an apartment in Williamsburg they share with their dog, a rescue named Samo.

“We were watching a Basquiat documentary,” explained Lane. “His handle was Samo.” Rad chimed in, laughing: “It stands for ‘Same Old Shit.’ It applies. She also leaves street art all over Brooklyn.”

On this overcast day in May, Lane and Rad are searching for something they know they need, or at least want: a special item to decorate the lovingly curated nursery of “Baby Rad,” due in late July. (They’ve decided on the last name Rad despite Nic’s own admission that the shortened version of his legal surname—Radkowsky, which he adopted in college—sounds a bit like an ‘80s BMX biker.) The piece doesn’t need to be functional—just a commemorative keepsake to mark the occasion.

“We want something we can look at and feel that joy and celebration of a new member of our pack,” said Rad.

“And because his dad’s an artist, we want something that’s more artistic and less cheesy-baby,” added Lane. “There’s a lot of stuff on Crate and Barrel Kids, but we want him to be able to say, ‘This is my first piece of art, and my parents got it for me while I was still a fetus!’” 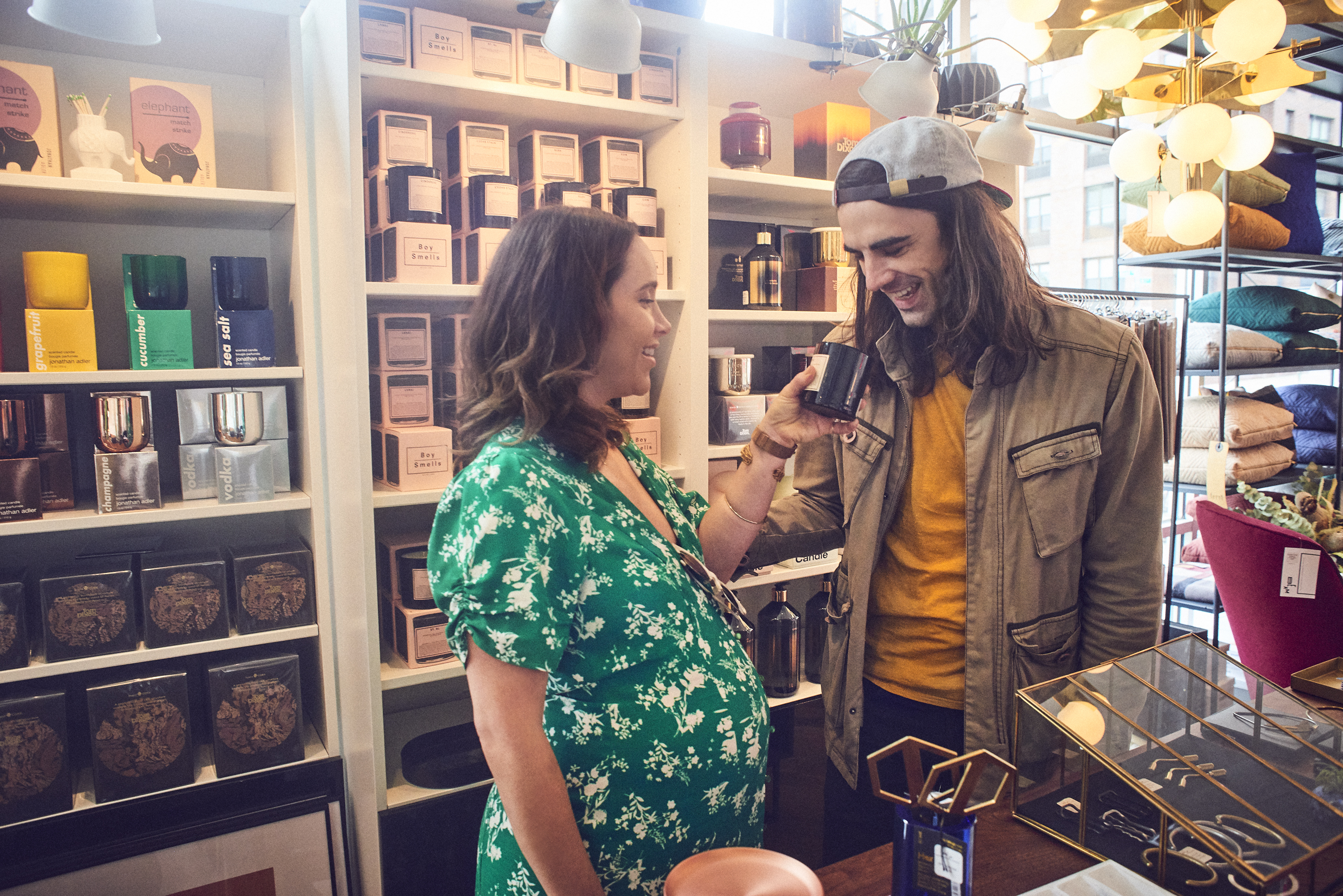 The first stop is Mociun, a jewelry, textiles, and home goods store on Wythe Avenue, and a shop in which Lane admits she spends a bit too much time and money. “Our dog always give me away,” Lane said. “The [owners] give treats to dogs, so every time Nic walks the dog, Samo immediately pulls him in here. Nic’s like, ‘So you’ve been shopping there a lot?’”

Lane and Rad pore over Mociun’s inventory, arranged on simple wooden tables with colorful legs and a recessed ombre-hued shelf the couple likes so much that they commissioned the contractor who built it to create something similar in their apartment. Rad picks up an oversized ceramic mug, while Lane points to a pillow adorned with cartoon breasts, which she recently gifted to an acquaintance and self-described “feminist writer.” “That’s what her Twitter bio says anyway, so I thought the boob pillow would be perfect,” Lane said, laughing. “I remember her opening it, like, ‘What am I going to do with this?!’”

“We want our baby and our dog to be best friends, so this will let him know he needs to love dogs,” she said.

Rad keys in on the artistry. “I like that it shows that it’s handmade,” he said. “You see the human who made it. You can see the craft in it.” 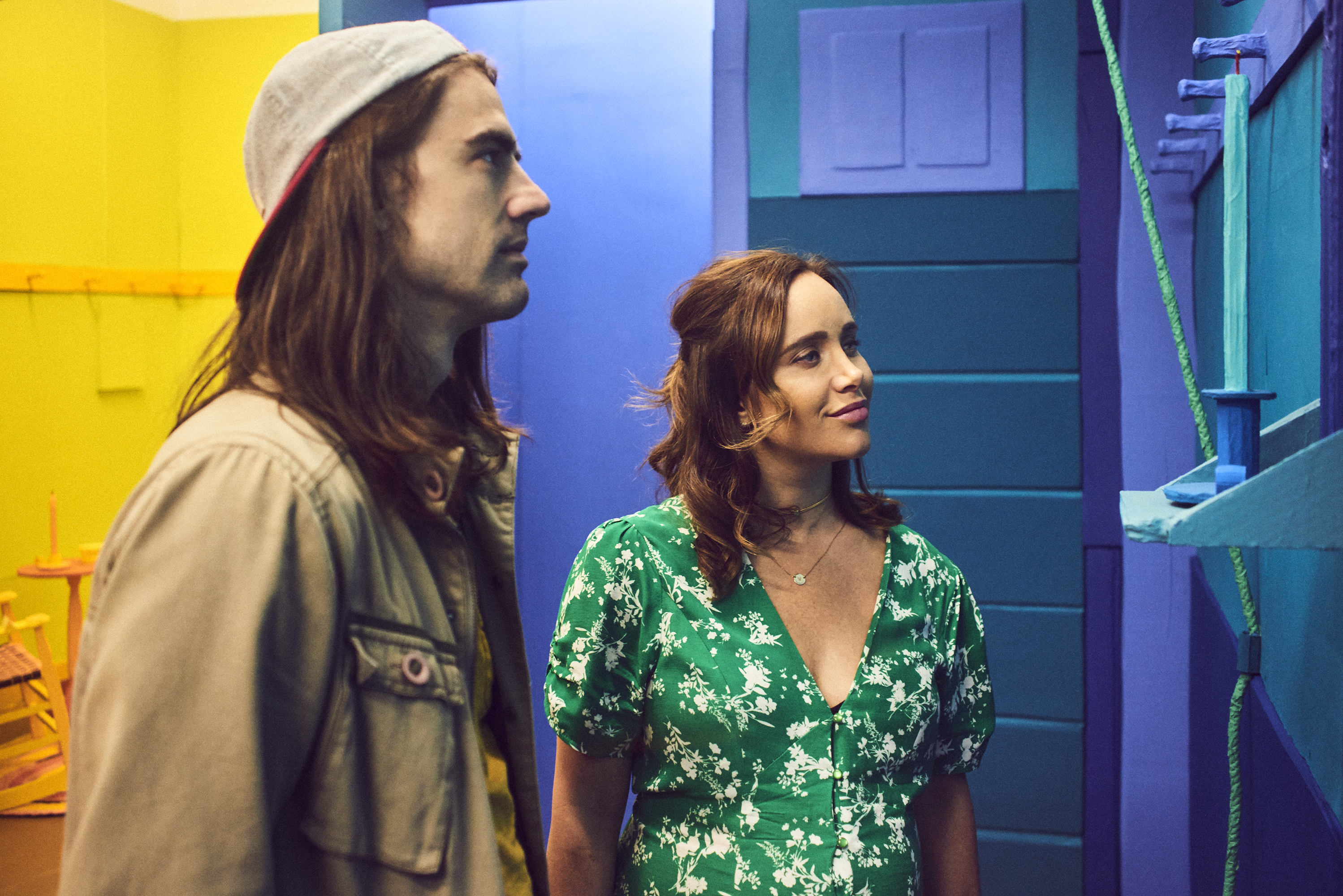 After a quick discussion, the couple decides to move on to the next stop, BEAM, a modern home décor and lighting store a short walk away, on Kent Avenue. On the way, they describe their personal aesthetics and how they jibe in their shared space.

“I pick really crazy things and then Nic brings me back,” Lane said.

“That’s pretty accurate,” confirmed Rad. “She has big ideas, and then I’m kind of a buzz kill, but I think it keeps us from having—”

Lane admits that her plans for the apartment can border on the impractical. She once pushed for the installation of a rock-climbing wall, even going so far as to get an estimate. (“That broke the excitement,” said Rad.) Before she met Rad, she kept a ping-pong table in her apartment that “basically took up the whole living room.”

“I think I’m going to project things I want onto our kid,” said Lane with a laugh. “‘Baby Rad really wants a swing in the living room! Baby Rad wants a rock-climbing wall!’ I plan to use him to get a lot of things…maybe certain vacations….” 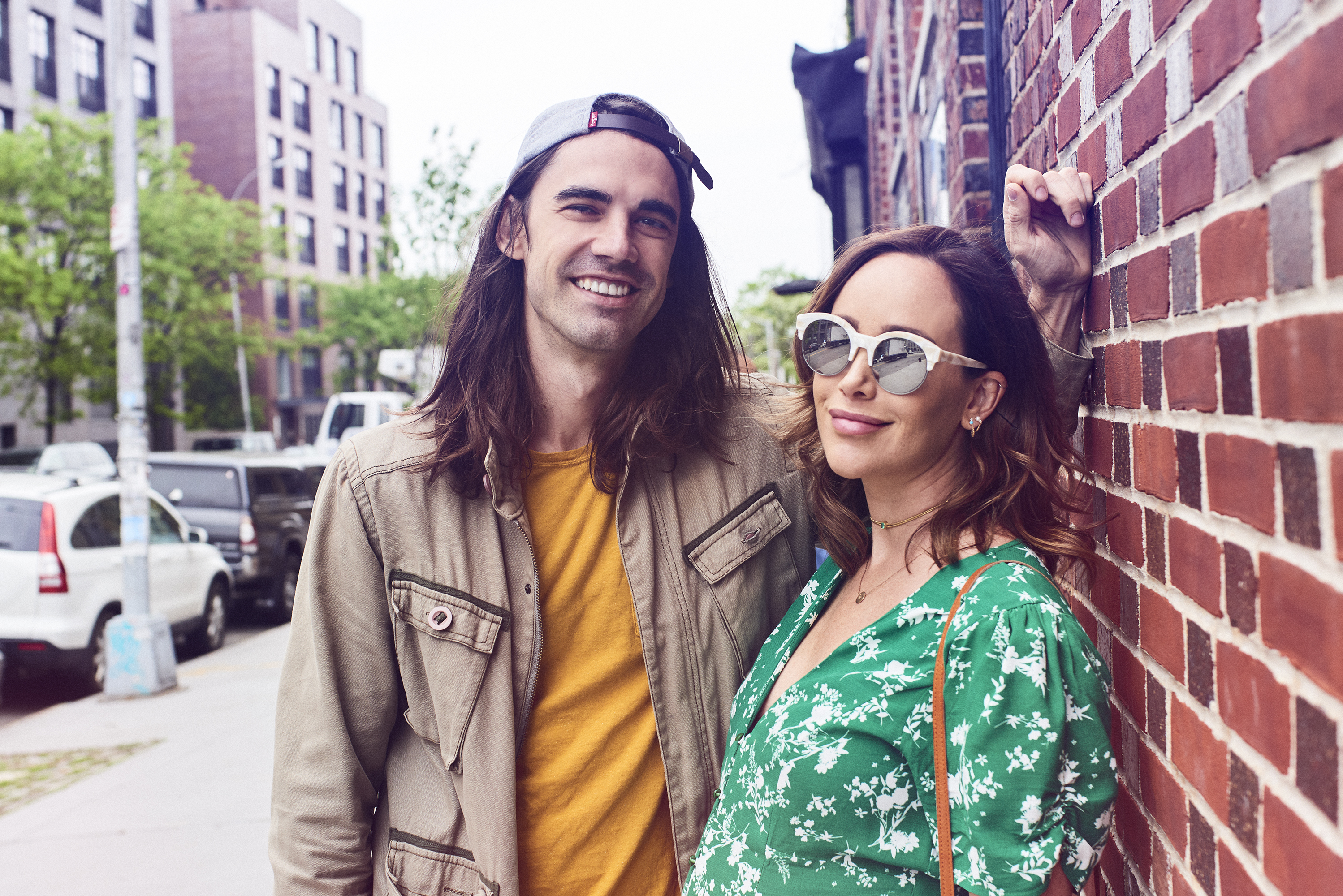 At BEAM, Lane and Rad look over the eclectic mix of décor—light-up letters spelling “HI!” that they’ve bought for their home, light-up bananas that Lane describes as “phallic but fun,” colored glassware, mirrors, and more. On a previous visit, Lane had spotted the Starman vase by Seletti, an 11-inch porcelain astronaut that would work well with the space theme that’s emerging in Baby Rad’s nursery. It’s not in stock, however, so the owner suggests she order it online.

“I’ve become an interior design junkie,” said Lane, examining some brass mice figurines. “Having a baby, there’s so much that’s out of your control, so I’ve become obsessed with things I can control—designing the ideal nursery is one of those things. I got some advice early on: ‘The nursery is not for the baby; it’s for you.’ So I’ve owned that. When I step into the room, I feel good. I feel happy. So I think I’m going to pass that energy onto the baby.”

Rad pauses to choose his words, then laughs. “I did briefly consider, of the things we’re buying, what the most vomit cleanup-able thing is,” he said. “I look around sometimes and think, ‘We have a lot of expensive things that could be easily ruined.’”

Lane holds up cylindrical figures for Rad to see: black-and-white rocket ship salt-and-pepper shakers. “This is the only space-themed thing they have in the store, but I don’t know how much my baby needs a salt and pepper shaker,” she said. “If they weren’t shakers, maybe they’d be contenders.”

The next stop is Journal Gallery, a contemporary art space on North 1st Street. Less of a shopping spot than a quick jolt of creative inspiration. A bright abstract painting on a white canvas by the actress-turned-artist Leelee Kimmel (aka Leelee Sobieski) hangs on the wall. Rad and Lane have been considering a more personal addition to the nursery, though not one they’ll find in Brooklyn. Rad’s friend and fellow artist Eske Kath creates minimal pieces featuring bright colors, shapes, and occasional nods to the cosmos—though he lives in Copenhagen, making potential transport difficult and costly. 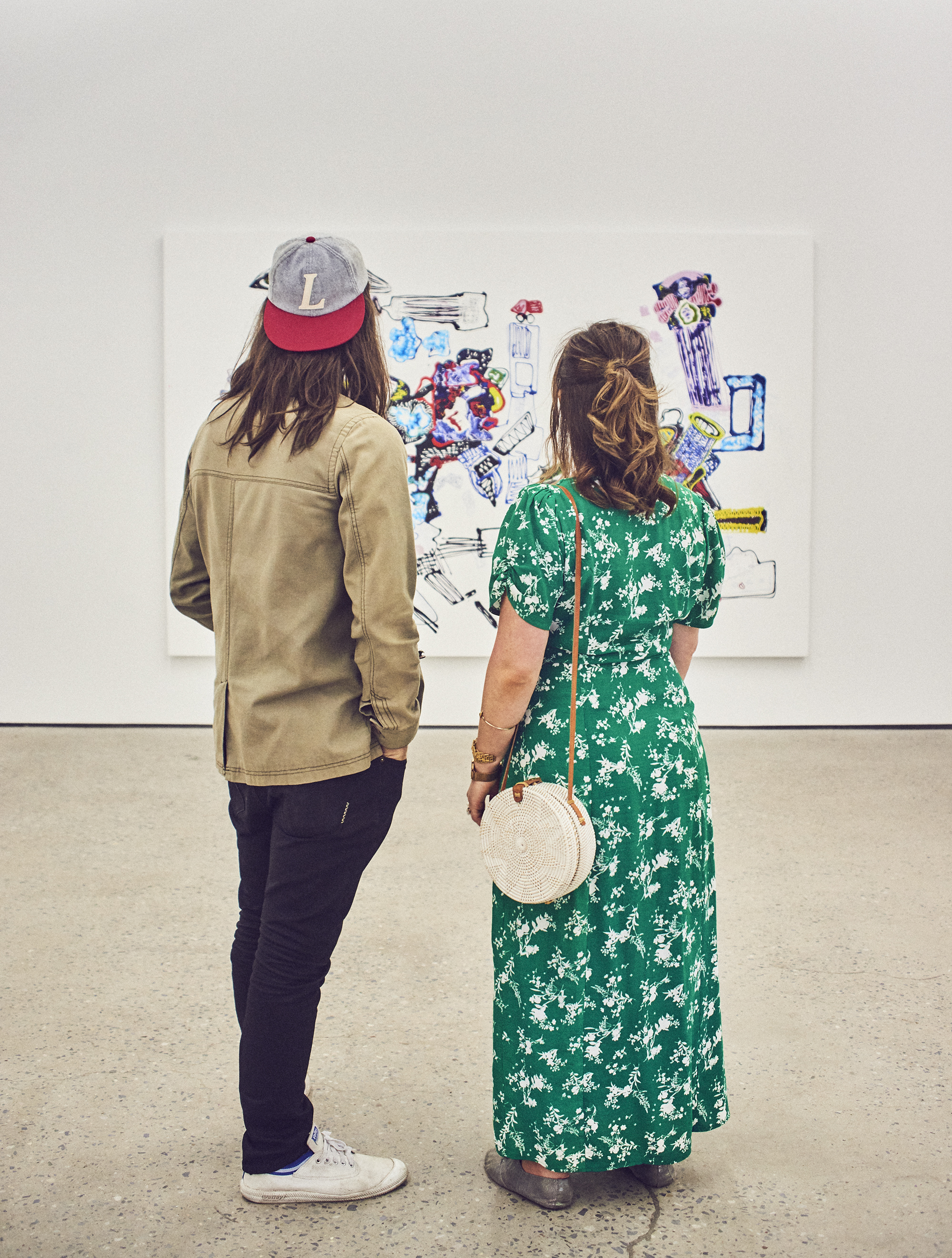 “It’s really happy,” said Lane of Kath’s art. “Maybe that’s not the intention, but it makes me happy. That might be what we’re waiting for: our kid’s first piece of art for his little astronaut room. I keep suggesting an exchange. Last time he was in town, I said, ‘Eske, you should go over to Nic’s studio and pick out a piece!’ But Nic paints on wood a lot, so it’s not like you can just fold that up, either.”

For the final stop, the couple chooses Victori + Mo, an emerging and contemporary art gallery where Rad shows his work. On display this day is the artist Amie Cunat’s Meetinghouse—a sculpture installation made of hand-cut and painted cardboard reimagining historical artifacts created by the Shakers, a sect of religious radicals in Colonial America—and Rad hasn’t yet had the chance to drop in.

“We should get him this, she said. “‘This is your first piece of art. We’re not trying to say anything with it. Now go clean your room.’”

After a quick discussion, the couple decides that a Kath original is exactly what Baby Rad’s nursery needs. They’ll figure out how to get it over from Denmark later. The emotional appeal is too great to ignore.

“When he’s in Copenhagen, he’s always sharing Instagram stories of his son messing around with paints,” explained Lane. “I hope that for our kids, too—hanging out in Nic’s art studio, playing with his paints.”

As for the rest of the baby must-buys, Lane admits with a laugh that they’re pretty much all bought after some well-intentioned Amazon shopping.

“I’m at risk for early delivery, so I didn’t want to wait for other people to buy me things on the registry,” she said. “At some point I went on a crazy binge to get everything practical we’d need. I left some of the fun clothes for other people.”

Rad smiles. “We’re trying to mix the excitement and enthusiasm with a Doomsday Prepper style.”