The source for shopping decisions, impulses, and inspiration
Anatomy of a Room

In a Cluttered East Village Apartment, Katie Dalebout’s Bedroom Is a Minimalist Oasis

Climbing the creaky steps to Katie Dalebout’s East Village apartment is a bit like walking back through New York history. Indeed, when she finally opens the door several floors up, the place reveals itself to be a dim, tenement-era railroad overflowing with milky-green jadeite bowls from the 1950s and ancient bookshelves crammed with dusty chotchkies. For the 28-year-old Dalebout, the sprite-like writer and force behind the millennial-minded self-help podcast Let It Out, it seems a bit out of character. Then she waves me into her bedroom.

Though just down the hall, Dalebout’s room feels miles away from the rest of the apartment. Spare in a cleansing, zen-like way, the space is completely bathed in warm, mid-day light streaming through a pair of tall windows, dressed in simple white lace curtains. Few adornments punctuate the space, but those that do are impactful—a small, rose-hued stone sculpture, petite but well-tended plants, a smattering of small photographs. 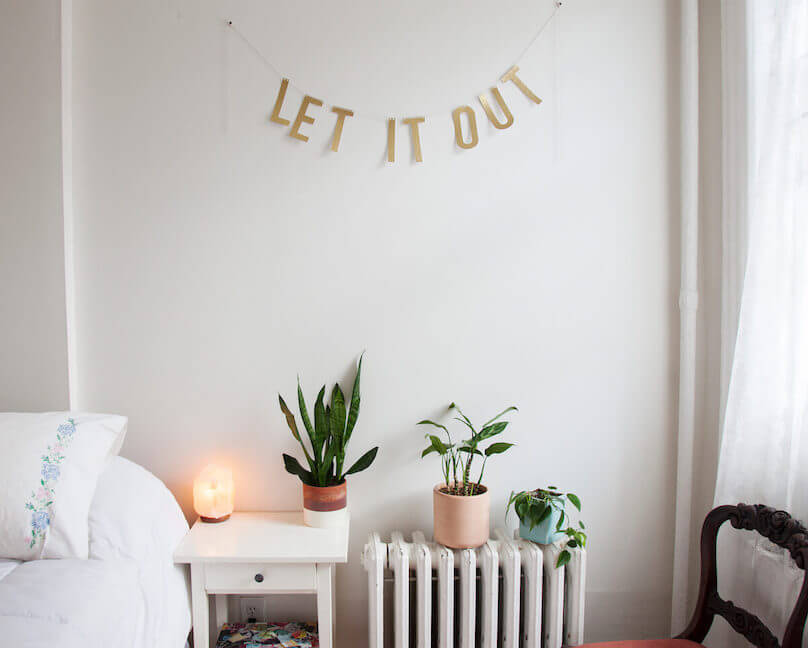 There’s a simple explanation for the contrast in style between Dalebout’s room and the rest of the apartment. “It’s very much her apartment, and I have a room in it,” Dalebout says of her 57-year-old roommate, who has lived in the two-bedroom abode since 1989. “I like more minimalism, and I like having not very many things. I like lots of open white space.” Having a roommate twice one’s age isn’t exactly the norm, but Dalebout finds the arrangement perfect for this stage in her life. The Michigan native only landed in the city a year ago. Her current digs aren’t a forever home, and that’s OK.

“I think there's just something that happens from being in a space for a long time,” she mused about the apartment’s style beyond her bedroom door. “You just accumulate a lot of meaningful things. I hope when I’m older and wiser, that happens to me. But moving me in was very easy. I think it took less than hour.” 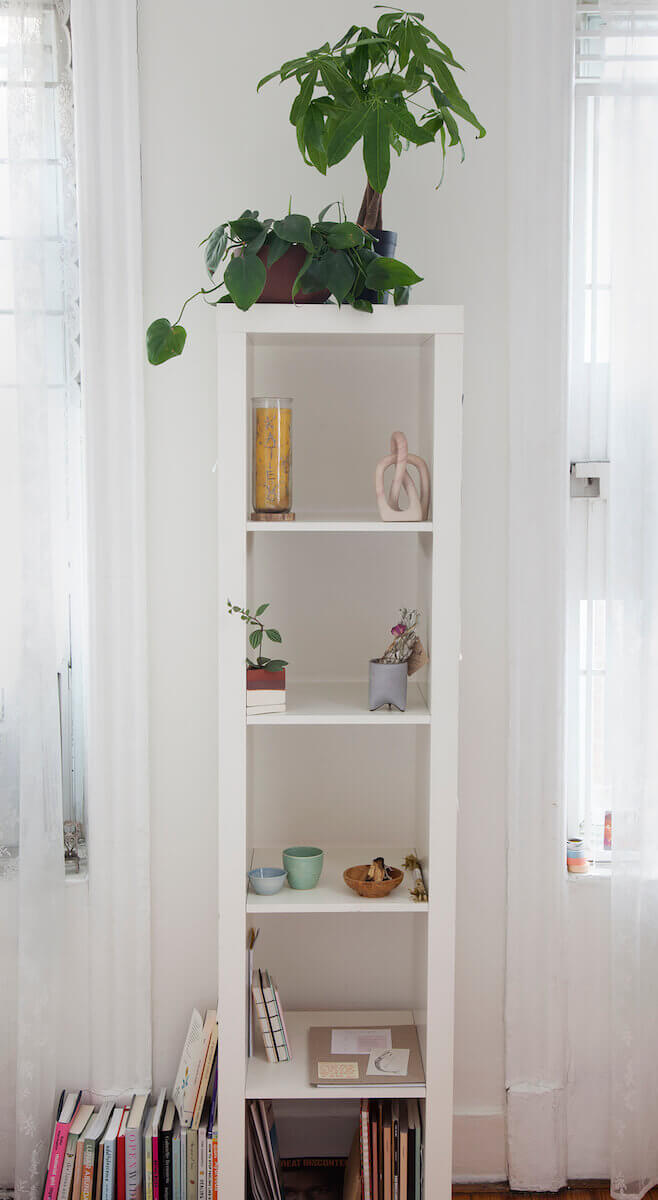 A tour of the space doesn’t take much longer. Here’s a peek at Dalebout’s carefully-curated space and how it inspires her.

The “Let It Out” banner was a gift from a friend, and it accompanied Dalebout to each stop on the book tour promoting her 2016 debut, Let It Out: A Journey Through Journaling. After the tour ended, she “thought it was cool, but I didn't think I would ever use,” Dalebout says. But on a whim, she put it up on the wall and there it’s stayed. The greenery and colorful pots are from online plant shop The Sill. “It’s my favorite place to buy plants in the city,” she says.

Nearly everything on display in Dalebout’s tall white shelf is a gift from a friend: The ceramic bowl with Dalebout’s name on it, the pink-colored sculpture that’s “supposed to signify love,” dried sage and lavender, and more. With only a few possessions to her name, those that make the cut are especially meaningful. “I’m very affected by the places I’m in,” Dalebout says. “I can’t work in a coffee shop that I don’t like the aesthetics of. I wanted [the shelf] to be this museum of things that are beautiful. I’m always changing its look. If you come a different week, it’ll probably look different. It’s very fluid.”

The tall yellow candle is from feng shui expert Anjie Cho, who Dalebout invited to evaluate her space a few months back. “It’s a birthday candle,” she says. “You’re supposed to burn it on your birthday until it’s all gone, and set all these intentions. I like the way it looks, too. It’s going to be sad when its gone.” 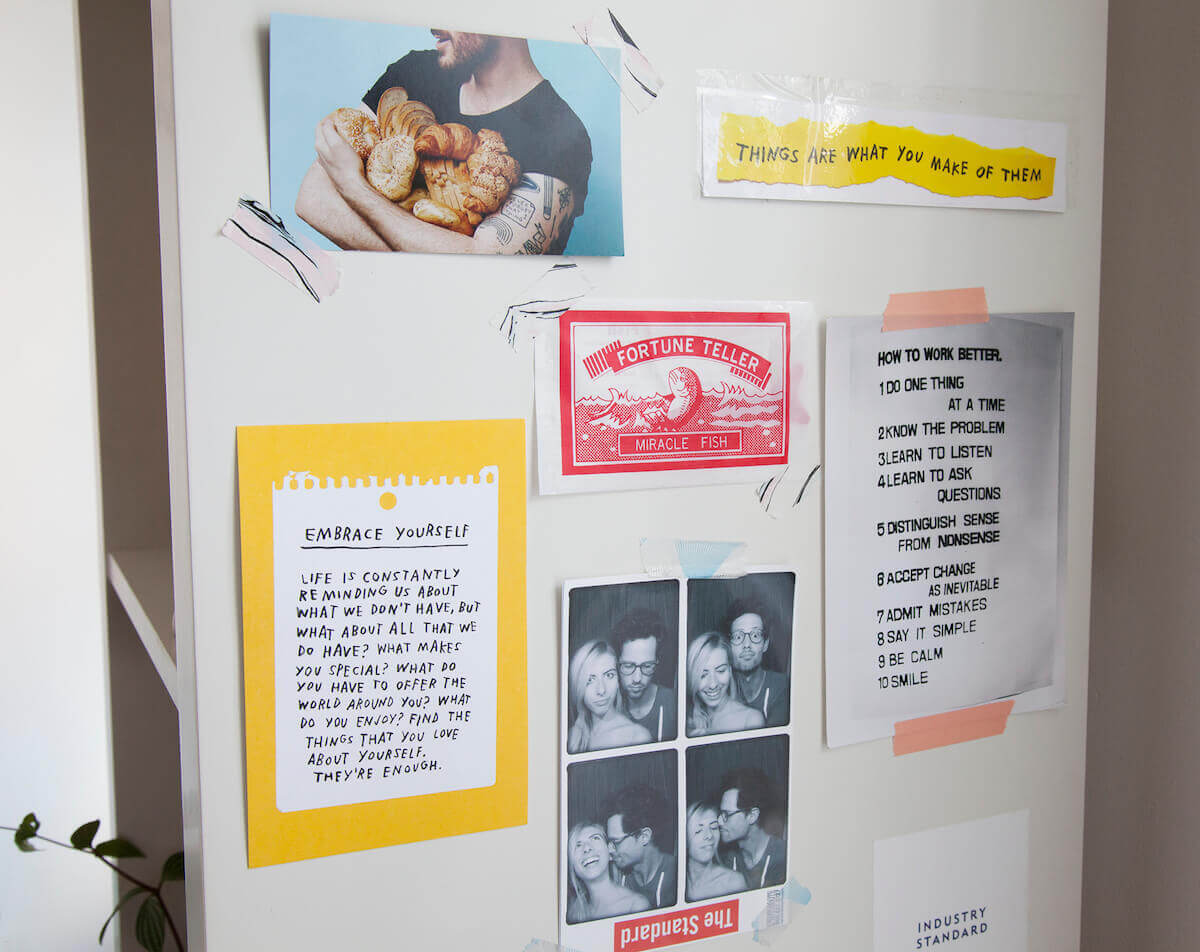 The museum continues on the side of Dalebout’s shelf. “I’m constantly taping things up,” she says. Right now, the showcase includes a hodgepodge of artifacts: A paper bag that contained a gift from a friend who recently returned from a trip to Japan, a birthday card, meaningful quotes, a souvenir from a trip to a photobooth with her boyfriend, Nick. “It’s kind of a weird combination of tactile things in my life,” Dalebout explains. The quotes are what change most often. “Every three weeks, I swear, I think, I don’t actually believe that anymore!” 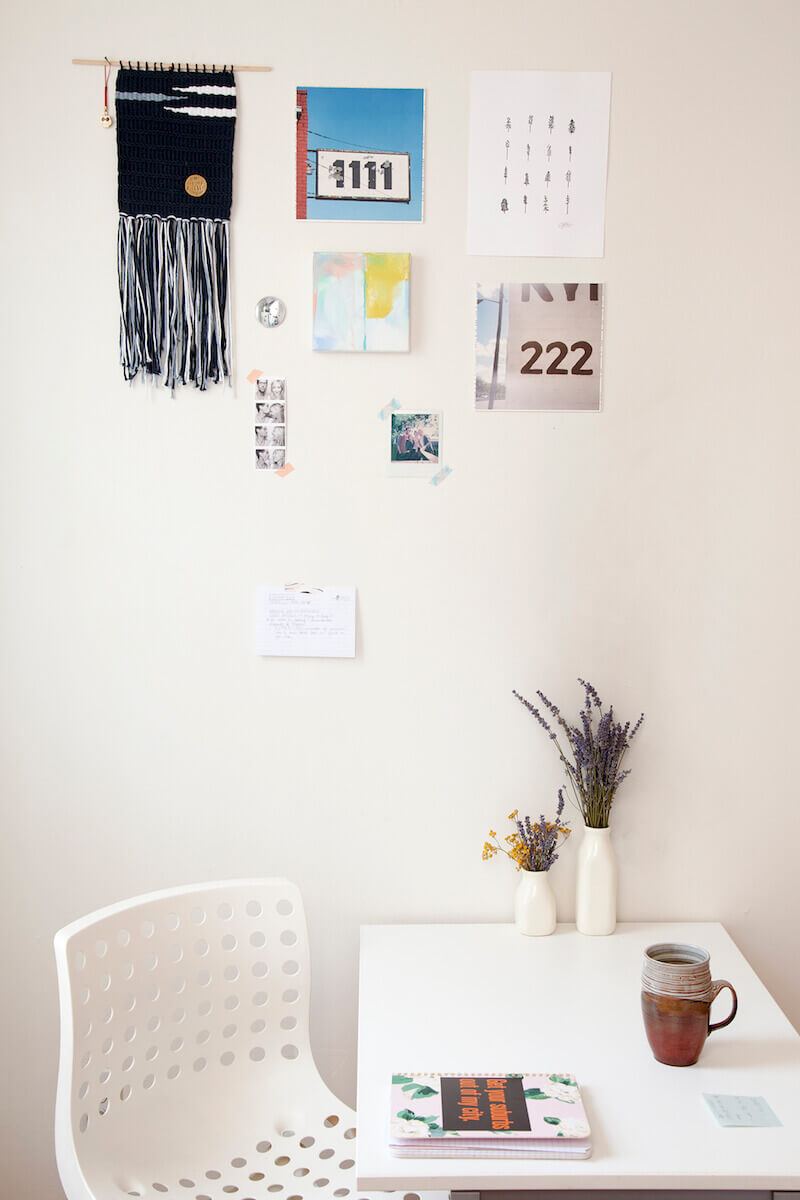 The selection of items above Dalebout’s desk, where she does almost all of her work, is also ever-changing. The photographs are her favorite. “My boyfriend is a photographer, and when I moved here, he drove me and stayed here for a week,” she says. When he left to return home to Detroit, “it was horrible, it was so jarring.” But he left her with a pair of original photographs as a goodbye gift. “My lucky number is 222, and this is on 8 Mile in Detroit, right near where I used to live,” she explains. “He went and took photos of them, because I would always point them out. He printed them on emails we sent each other. I thought it was the nicest gift anyone has ever given to me. I felt really seen.”

A collection of small, coin-sized mirrors are scattered here and there in the apartment, strategically placed by the feng shui expert. One of them is nestled between the woven art piece and tiny painting, both gifts from friends.

“This little mirror is supposed to help me be more focused,” Dalebout says. “I don’t know if it works or not, because I still feel unfocused, but it’s supposed to do magical things, and I like having it there.” 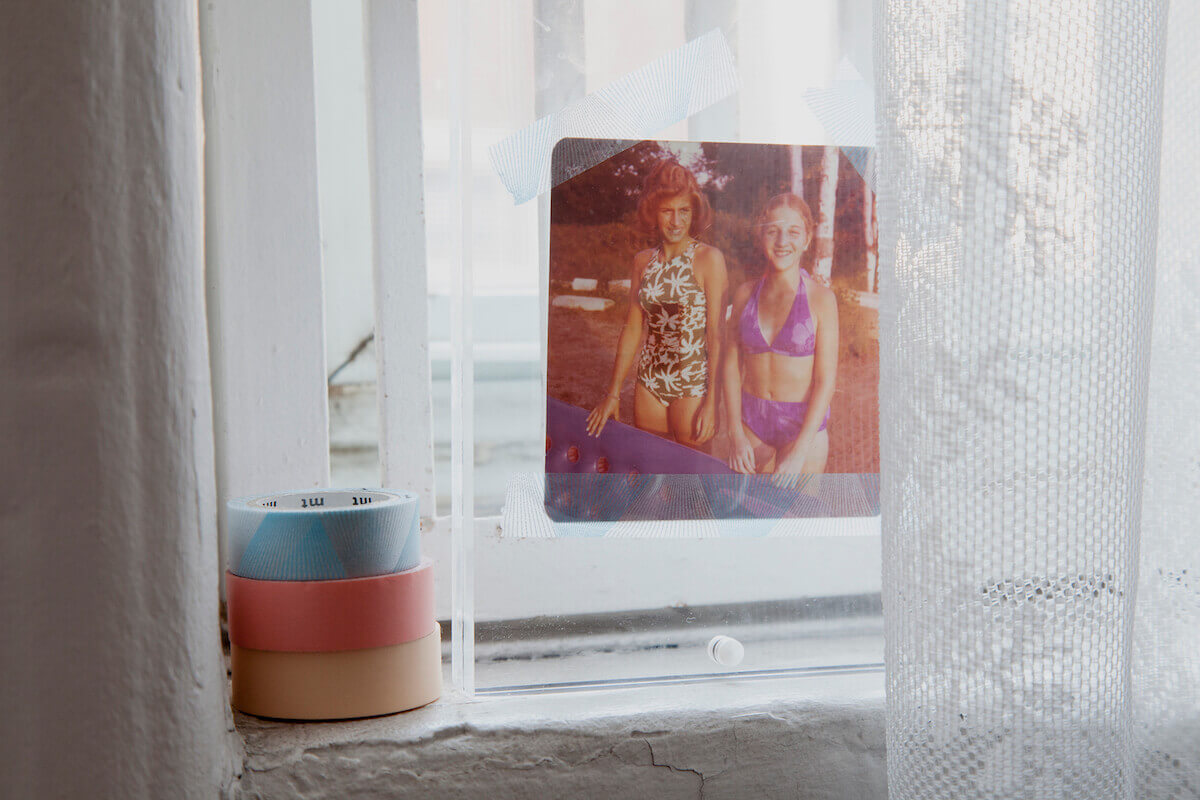 “This is my mom and my aunt from September of 1975,” Dalebout says of the image in the window. “I just love this photo of them. My mom’s hair is so silly. I really want that bathing suit, though. I love seeing my mom and my aunt together. I always keep it around.”

Dalebout doesn’t mind owning only a few things. In fact, she prefers it. “I think moving is so cleansing,” she says. “In life, from a feng shui perspective, it’s healthy to move things around in your space. Moving forces you to look at everything you’ve acquired and question why you have it.” Even when she’s in a place for a while, Dalebout says she takes an inventory of her things every six months and gets rid of whatever she doesn’t use or enjoy anymore. “I don’t see myself accumulating a ton more while I’m here,” she continues. “In this space, it’s kind of perfect for me now while I’m focusing on my work and building things.”