A tour of the marketing guru’s Brooklyn apartment.Published: July 06, 2019

Call it old-fashioned hospitality or a dutiful bit of micro-marketing—when you drop in on Kaylan Rexer at her bright and cozy Williamsburg, Brooklyn, apartment, she’s going to offer you a drink. As brand director of Ilegal Mezcal, she’s been spreading the gospel of agave since 2010, when Ilegal imported its first batch to the U.S. from Guatemala, where her uncle, John Rexer, founded the operation 16 years ago.

“Everyone thinks the [current] Mezcal boom came out of nowhere,” Rexer says. “But we’ve been here [for years], explaining to people, ‘No, it’s not the thing with the worm in it. No, it’s not a tequila. No, we can’t call it Scotch, even though it is smoky.’ [laughs] There’s a lot of Mezcal out there now, but we had the first export into the U.S.”

Rexer’s professional responsibilities are broad, from spearheading events to launching viral marketing campaigns to—as she’ll do the day after we meet—jetting down to Miami to for a brand education tour aimed at members of the press and nightlife industry.

“I've always felt that my number one job is to build a community that has genuine experiences with the brand,” she explains. “We're definitely still the rugged team that doesn't do everything according to industry standards—but it's worked for us so far. They say we're like a punk band.”

Rexer has lived in her current apartment for six months—one of those sign-on-the-spot situations specific to the tight New York rental market—and when she’s not traveling, she’s at home, chilling with her girlfriend, Taylor, or enjoying the patio space with her dog, Penny Lane. Rexer’s tastes are both eclectic and personal, from the reclaimed wood coffee table tailor made for her to the guitars that hint at her musical past to a drip painting by her aunt that attracts lots of admirers on Instagram. Of course, Rexer’s connection to the family business in Guatemala is also well represented, in the locally woven blanket on her bed and by Maximón, a traditional Mayan effigy keeping watch over the living room. Then there’s Rexer’s home bar, fittingly stocked with Ilegal and one bottle of … amaretto liqueur? 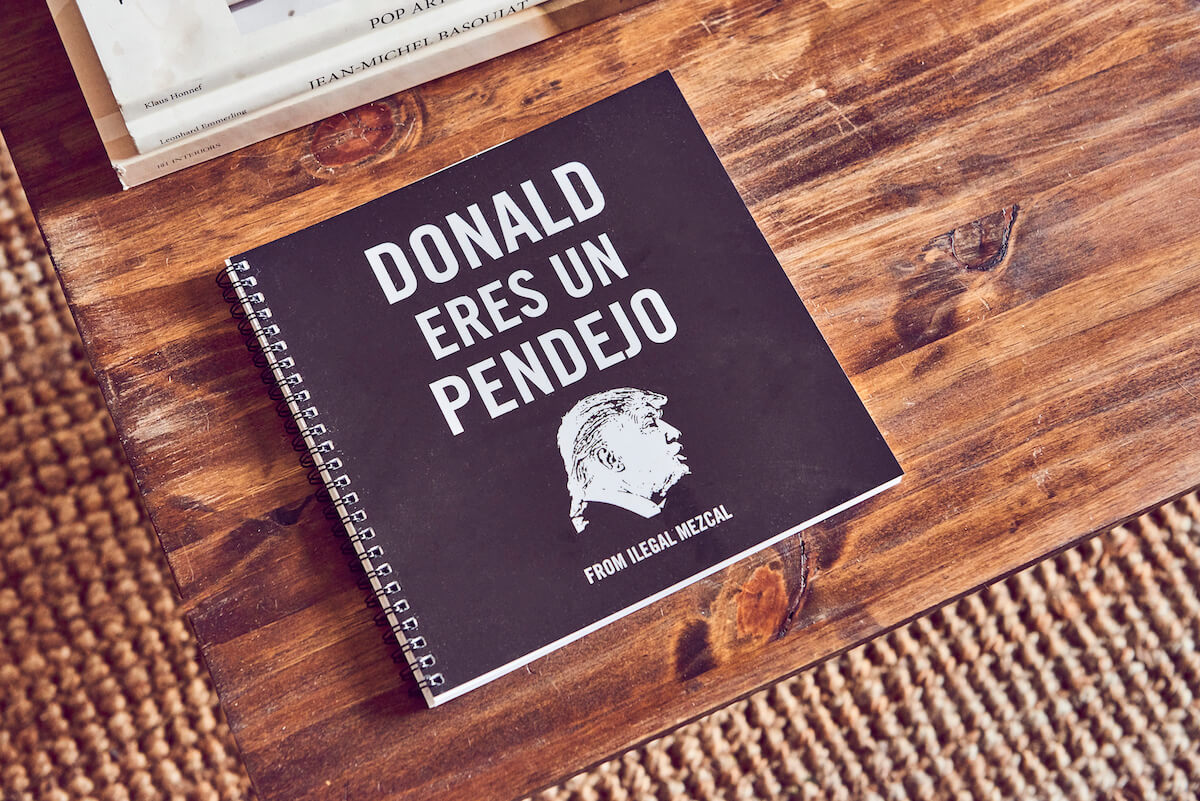 “Probably one of the things I’m most proud of in my career: Ilegal Mezcal did this campaign, which literally came together in one afternoon. We started putting it up on the streets 24 hours later. We wanted to build a community around it and let everyone know that we stand behind the people Trump is saying things against. We've raised a lot of money for charity through selling shirts and events, and we won a gold honor for brand identity at last year’s Shorty Awards.” 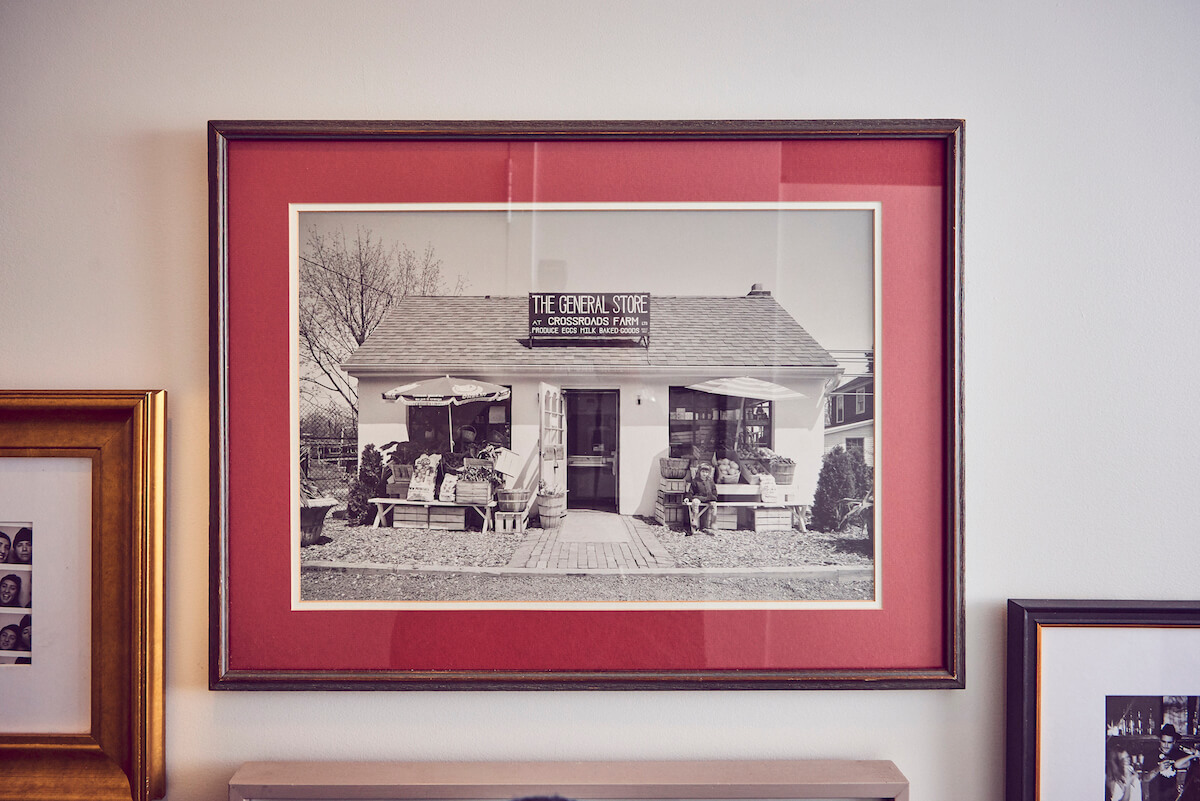 “That’s actually me. I grew up on Long Island, in Huntington, with hippie parents. They were very young, 24, when they bought this old chicken farm and grew produce and had lots of chickens. The photo is in the town's historic records.” 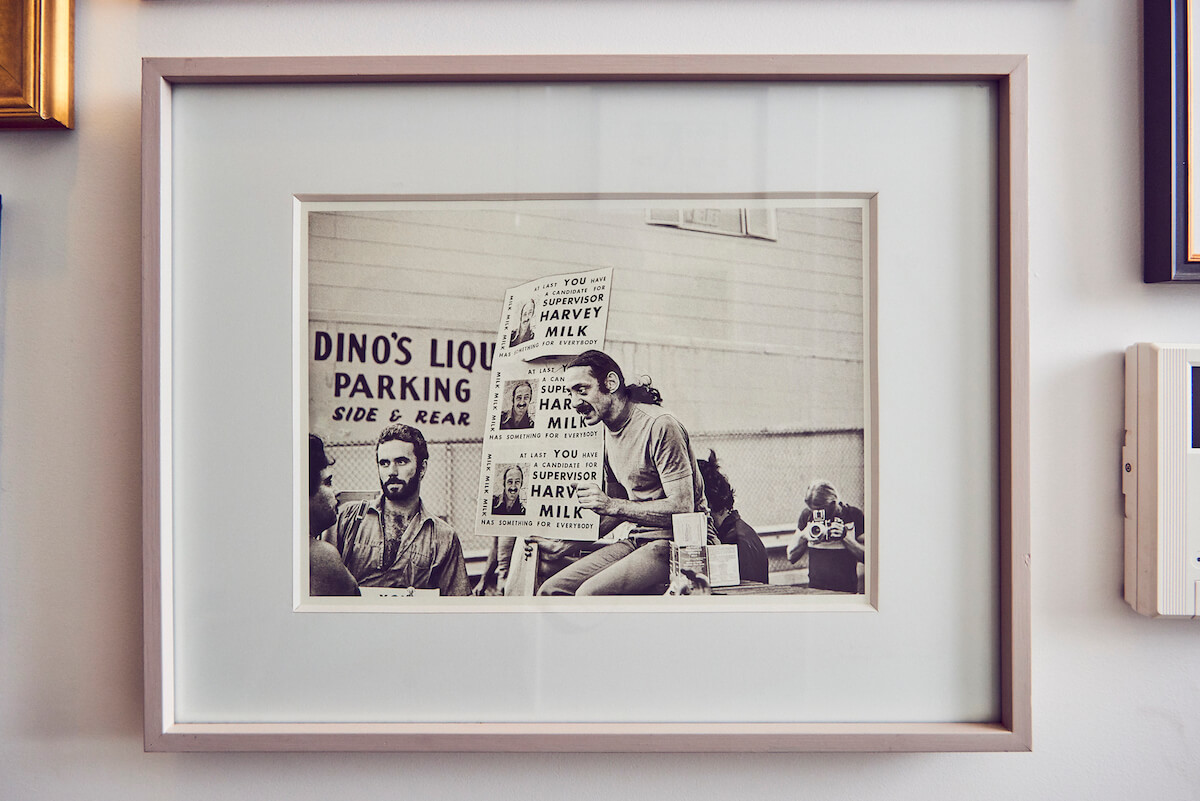 “My uncle gave me this as a gift. It's an original print of Harvey Milk, by a Guatemalan photographer whose name I can’t remember. It’s the thing that means the most to me on this wall.” 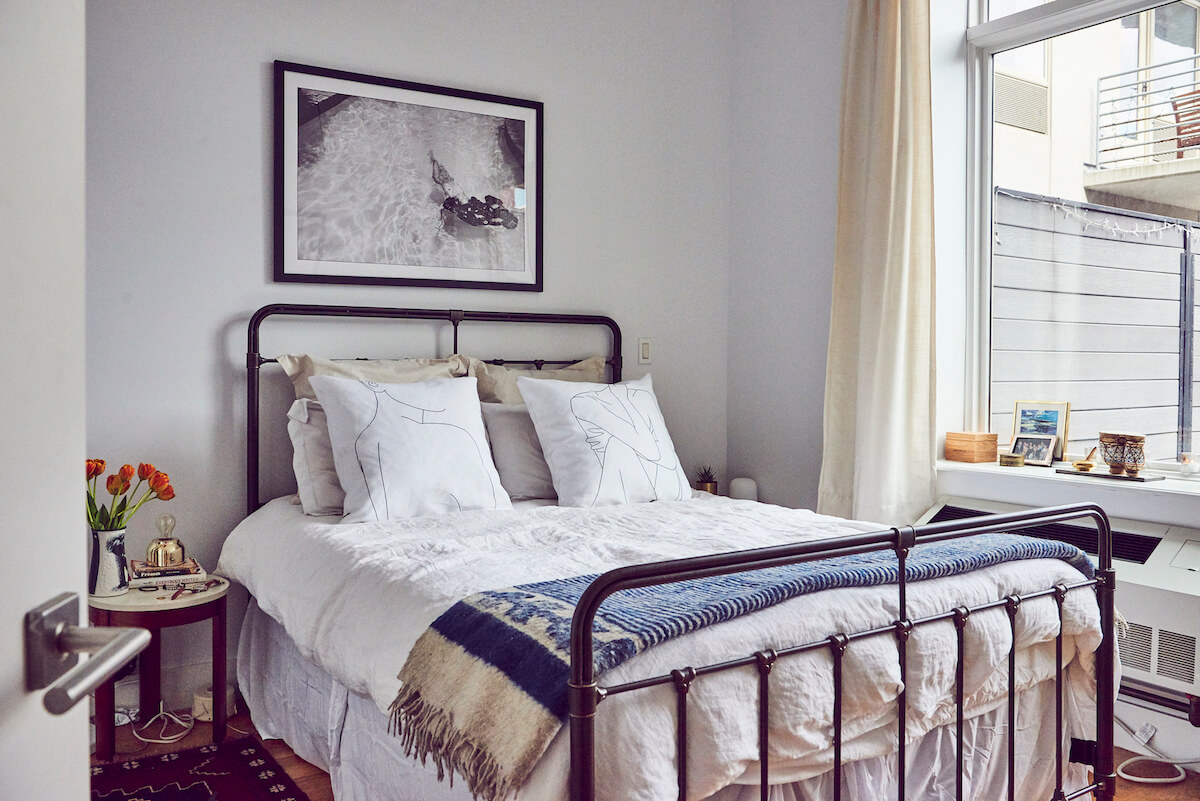 “I got this bed frame on Wayfair. I wanted it to feel like a farmhouse—very clean, easy, and inviting. The blanket is from Guatemala. I love the colors. Guatemala is like a second home to me; I’ve been traveling there since I was 16. I bought it from a woman in a marketplace, and my uncle who lives down there has a guy he buys a bunch from every time he walks in. His blanket-rug guy! He uses them as carpets. And these pillows are from Society Six. I clearly like very simple lines.” 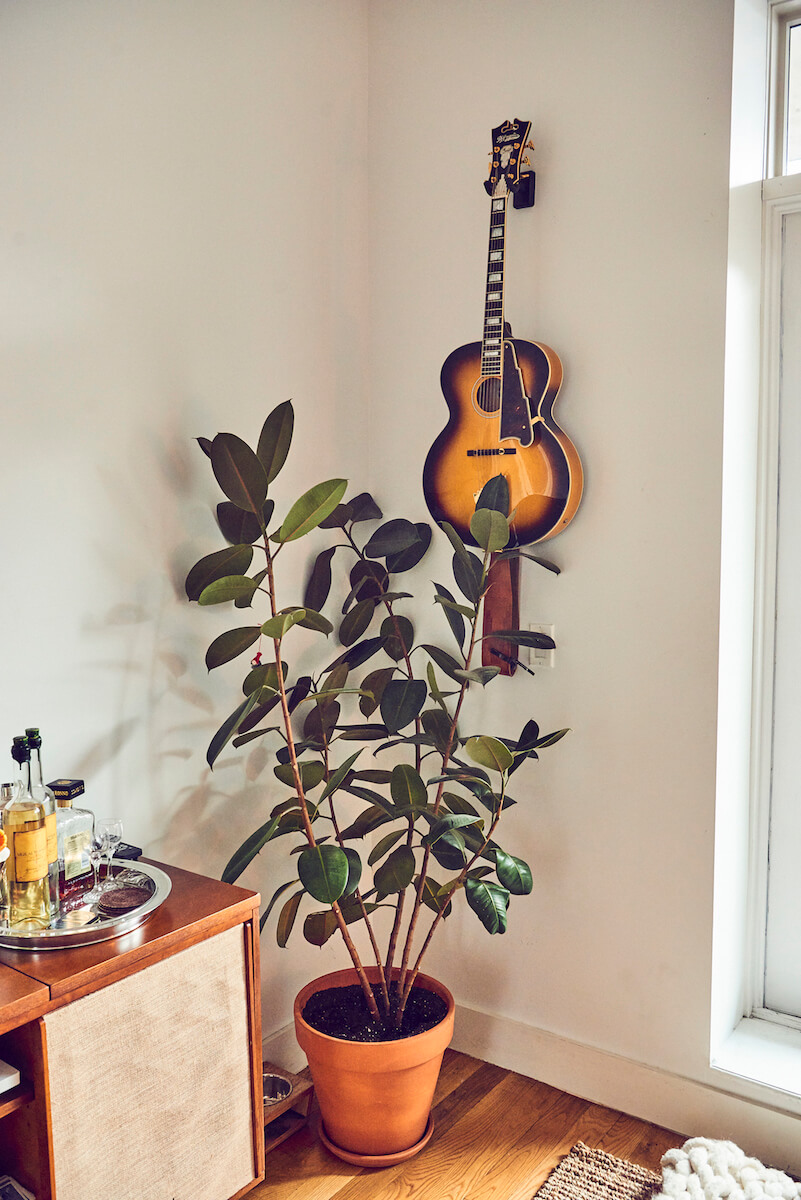 “The people over at D'Angelico guitars gave me this one as a gift. We have a bunch in our showroom. They're local and have been here a long time. I started off playing the drums when I was four and then I moved on to guitar. I used to write music and I played at SxSW in 2009.” 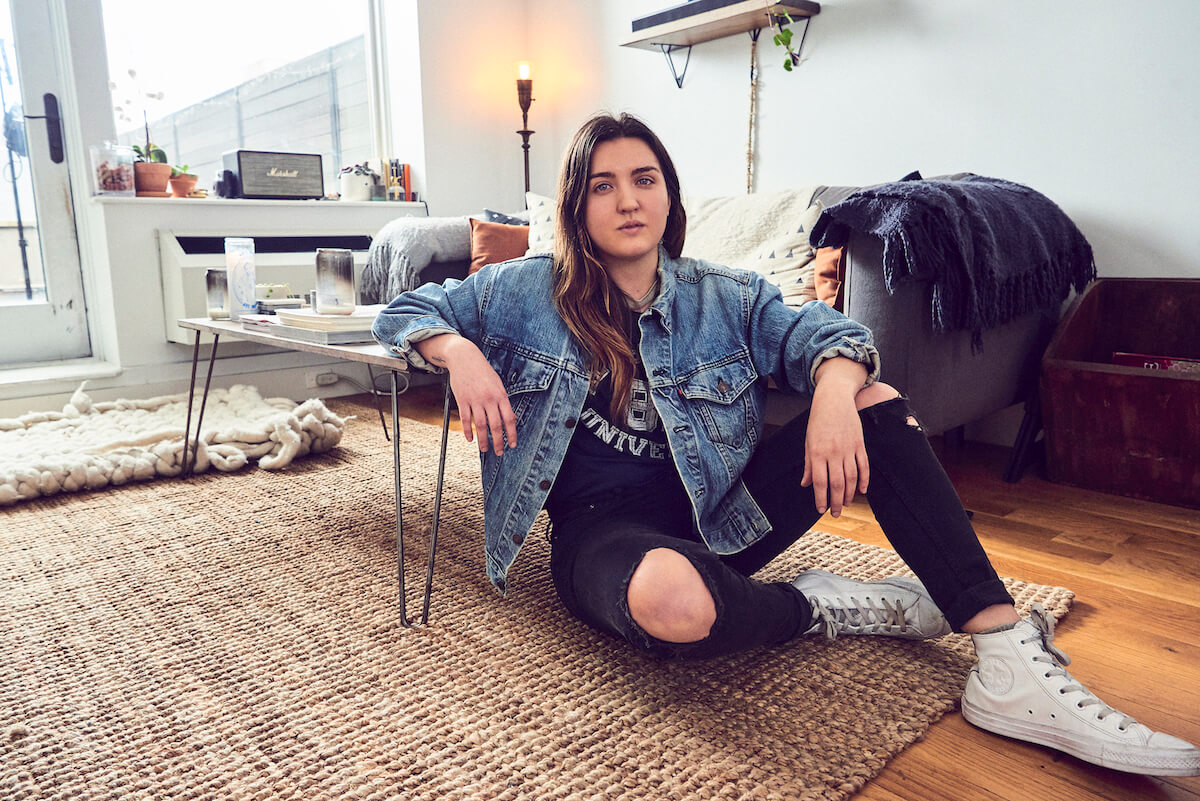 “The couch has all this stuff on it because it's ugly, but functional for my dog. She’s a beautiful psycho—a collie-Australian shepherd-hound mix—so she’s a redhead with brindle and blue eyes. The couch is from IKEA. When I was thinking about getting a dog, I was also thinking about a nice leather couch, but I thought, ‘You know what? I’ll hold off on that.’ I’m glad I did because she was five weeks old when I got her and she just peed all over that thing! You can take those covers off and put them in the washer.” 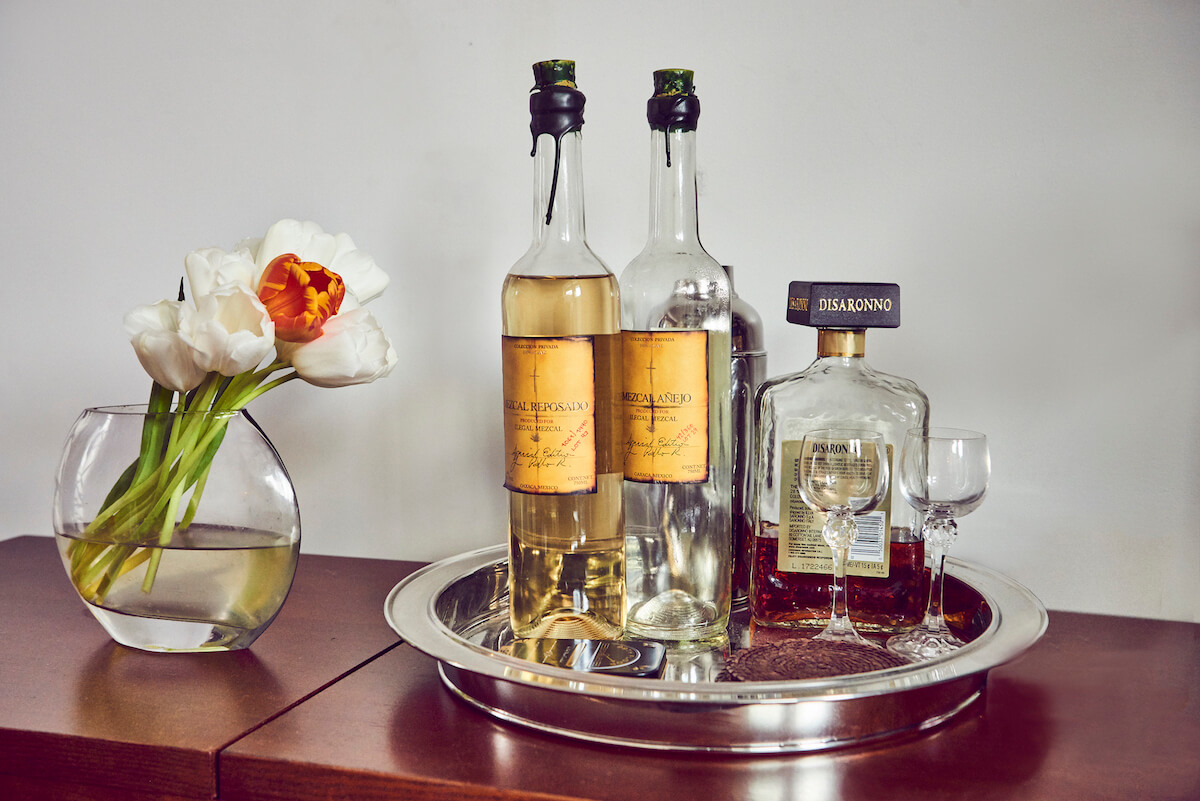 “The most important part. I almost put the Disaronno down at the bottom, but we actually drink it a lot. I just like amaretto liqueur! On the rocks instead of having ice cream—totally. It’s definitely sharing some sacred space among the Ilegal Mezcal.” 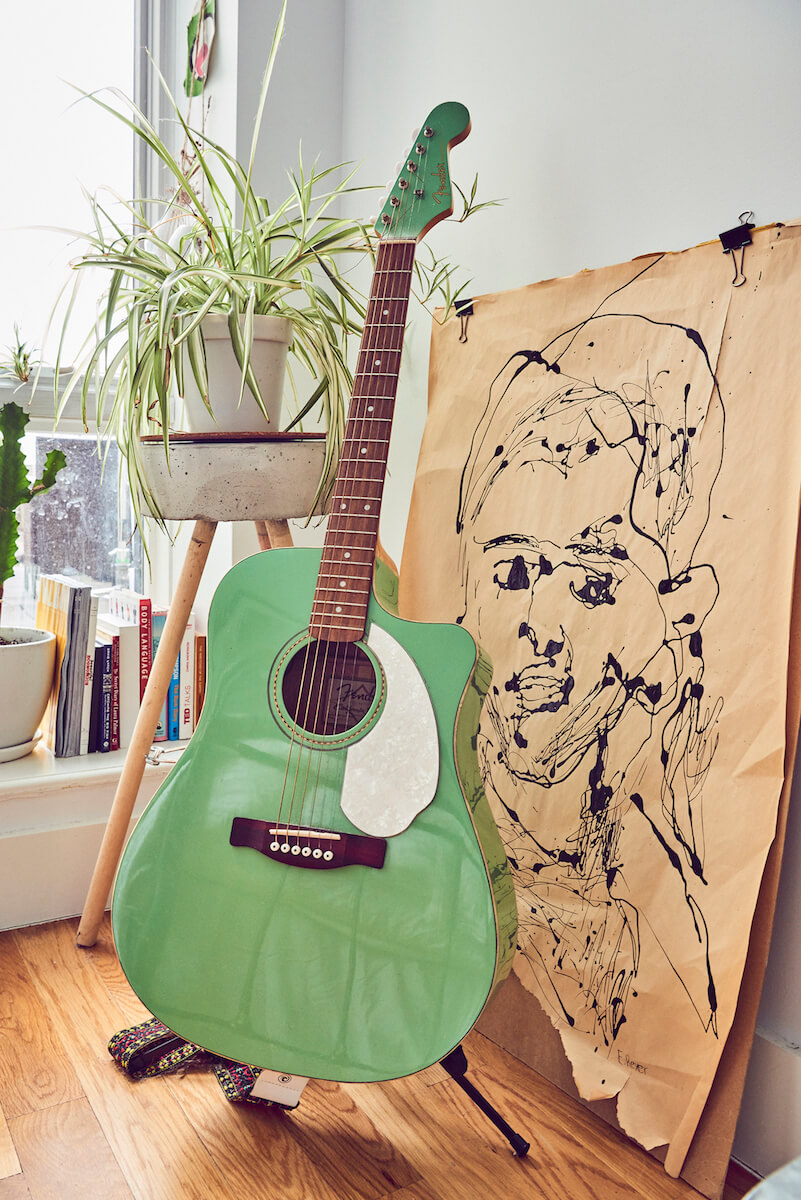 “I just fell in love with the color of this guitar. I was looking specifically for an acoustic guitar with an electric neck. I have little hands, so this was easier for me to play in high school. It doesn't get played as much now as I would like.” 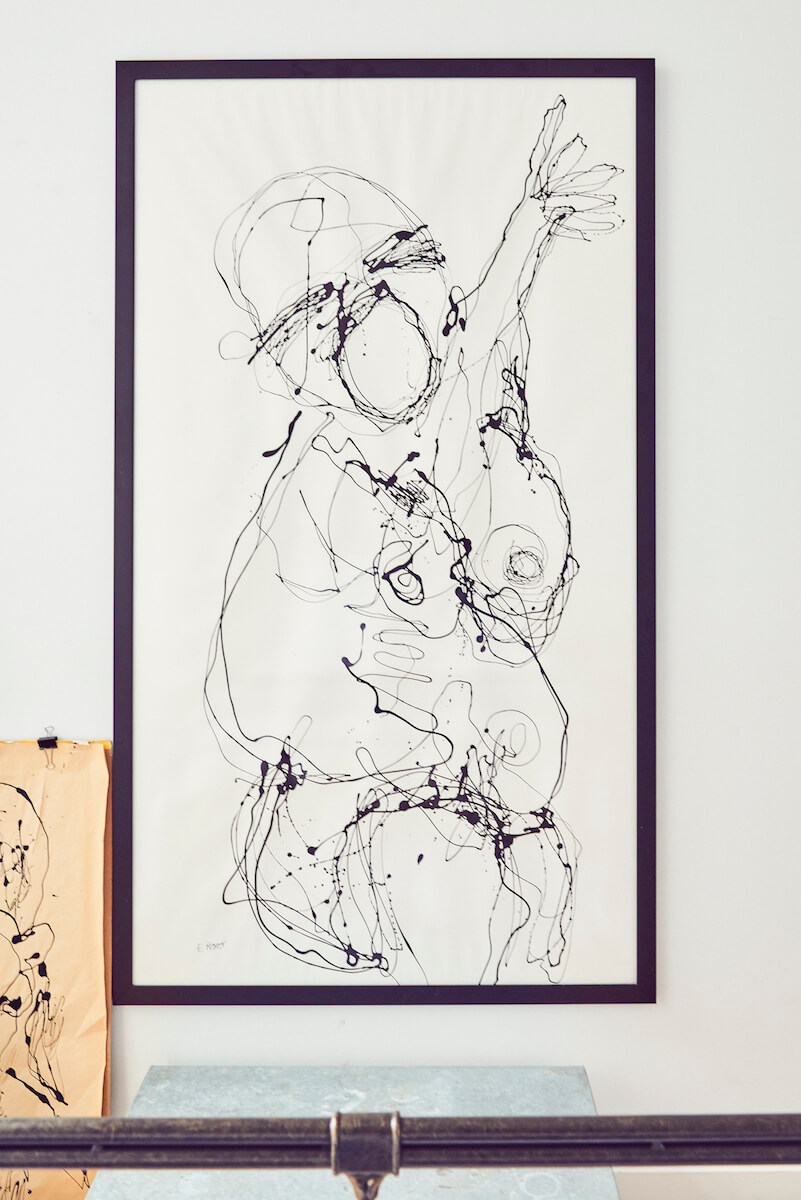 “This was actually painted by my aunt. She’s an amazing artist. It’s signed there Elizabeth Rexer, though she goes by Elizabeth Rexer Leonard now. She studied art in school, but she’s actually a farmer on Long Island. I get asked about this piece all the time—like, if I Instagram a picture of my dog, people comment ‘How do I buy that painting in the background?’ She doesn't do it anymore. I’ve told her a million times there’s interest. We’ll see.” 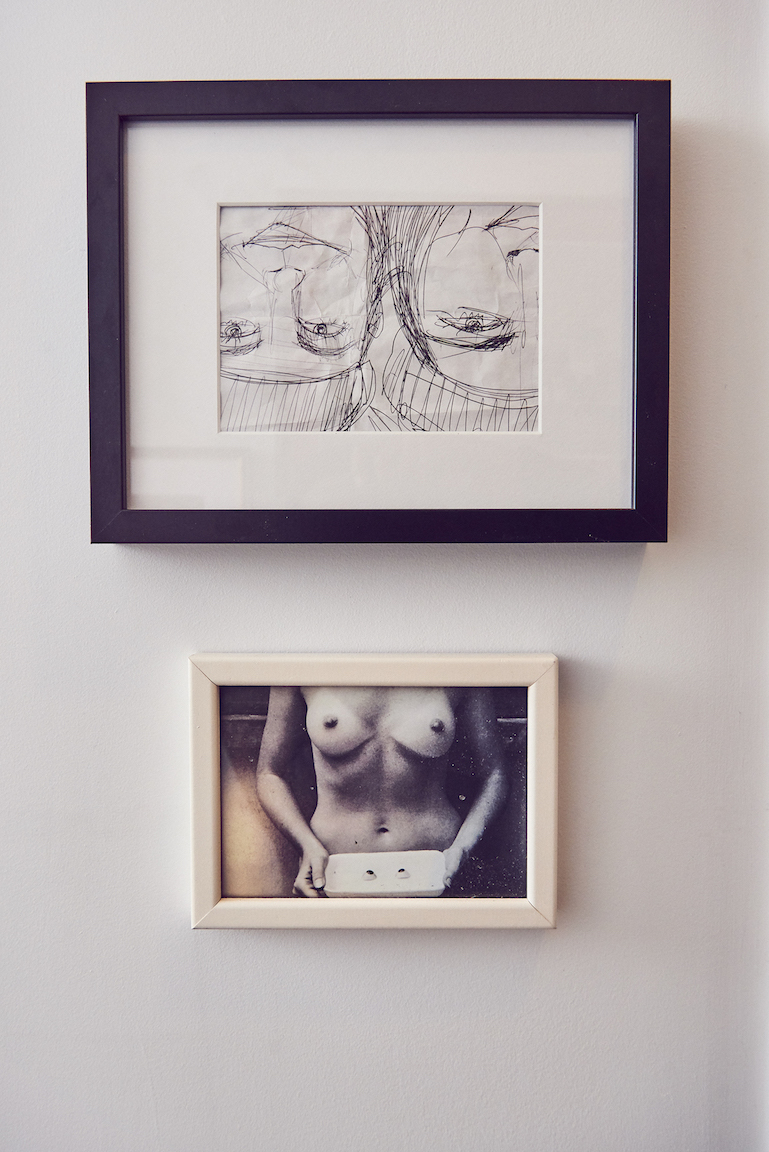 “I don't know who the artist is. A lot of people ask me if that's me, and I'm like, ‘No. Do I look like the type of person who’s posing naked in a pool?’ But I love it, and the person who gave it to me knows I love water and immersion. It’s very calming.” 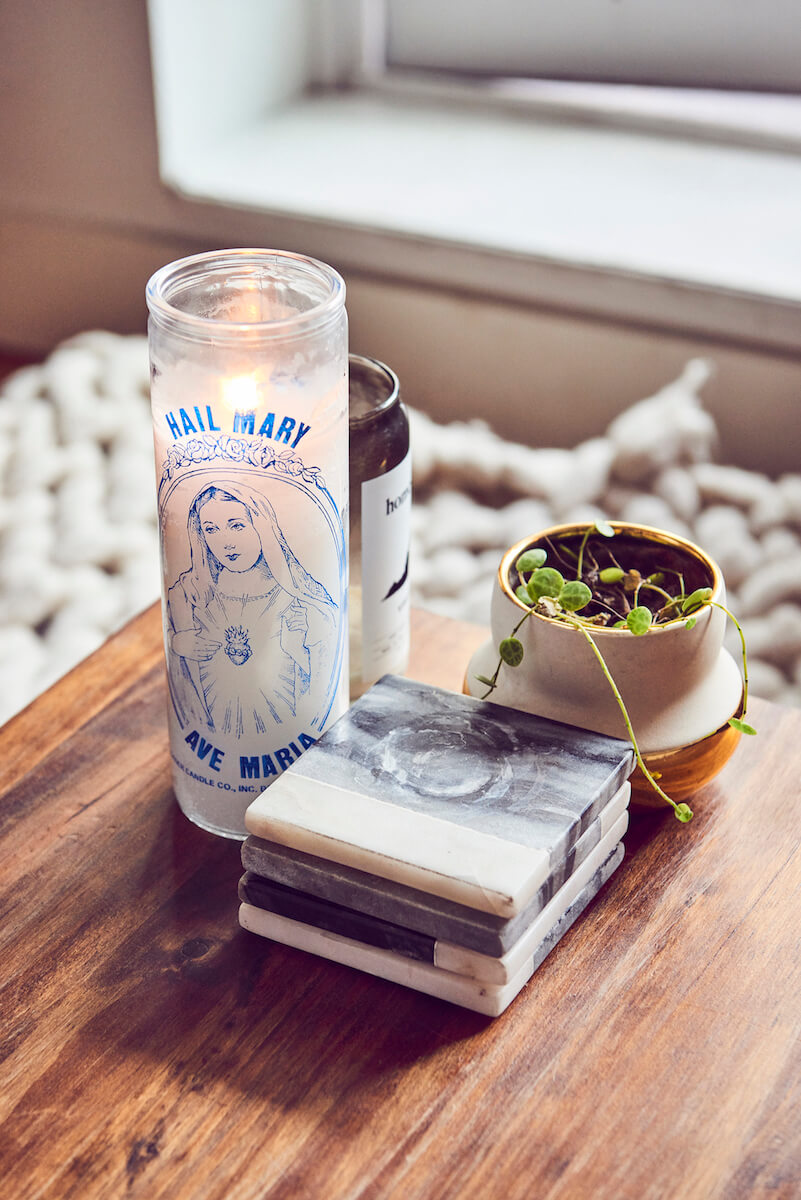 “Incense! There were weird things happening with fire when I moved in. I’m not joking. I’m not superstitious, but when I moved in, my girlfriend’s hair caught on fire. My dog’s bark collar remote caught on fire. When we were trying to start the gas fireplace outside, the tank lit on fire! So I was like, ‘Why not buy something else to burn that will hopefully get the weird fire spirits out of here?’ I got it at Feng Shui, a nearby vintage furniture shop. The incense and the Hail Mary candle. Nothing else has caught on fire since then.” [laughs]