The source for shopping decisions, impulses, and inspiration
A wall of merchandise inside the store / Photography via Diana Kane
Shopkeepers

How Do You Sell a Dress in a Pandemic?

COVID-19 #SmallBizSpotlight | A feminist boutique in Brooklyn fights to survive. Published: May 12, 2020


Editorial note: Since we published this story, Diana Kane has closed her brick and mortar boutique. The online store remains open.


Last weekend, my partner and I biked to Prospect Park for a picnic (calm down, Karens — we had sanitizer and masks and kept the hell away from people). At one point on the bike loop, a cycler ahead of us had a nasty crash. For a split-second, there was an excruciating pause, as onlookers froze to decipher how to respond. Normally, the immediate impulse would be to rush to someone in crisis, but social distancing has upended that instinct. After a few seconds, one brave man nearby called out, “I’ve got it! I’m calling 911!” As he dialed, he swooped his free arm out windshield wiper-style, as if to create a safe wall between himself, the fallen cyclist, and the perplexed crowd growing around them.

No matter how acclimated to this crisis I start to feel, scary scenarios like that keep happening, jolting me out of my ignorantly blissful apathy. Writing this column has a similar effect. Every interview reminds me what’s at stake right now, like the survival of the small businesses that make New York worth writing home about.

This week, I spoke with Diana Kane, owner of the eponymous apparel and jewelry boutique in Park Slope. Since the feminist t-shirt Kane designed in 2015 went viral, she has turned the store into a political meeting spot, hosting fundraisers, art shows, and bake sales to advocate for gender equality. Read on for our conversation about the true wealth of Brooklyn, the moms behind mom-and-pop shops, and why “capitalism is rough.”


The following interview has been lightly edited for clarity.


You’ve been in Park Slope for just over 18 years. How would you describe your community?
When I started, I didn't have kids. Then I had kids, and I met people in the neighborhood in similar positions, so we've watched our kids grow up together. The beauty of Brooklyn, the wealth of Brooklyn, is not money — it’s spectacularly talented and plugged-in people. And the store has been a conduit for connecting those people. We've galvanized the community around the Women's March [in D.C.] — I took three buses the first year. We've hosted myriad art shows. It's more than a store; it's a community meeting spot.

Since you had to close your doors, what has business looked like?
We have an online presence, but we don't sell a lot online. I design a lot of the jewelry we sell, but my casting house in Manhattan is closed down, so I can't actually produce anything. We’re selling a little bit more now that I’ve started making masks at home, but I’m just one person and I can only make so many in a day… They take time, and they’re not paying the rent. I can't believe that we're going to make it, frankly.

We would have celebrated our 18th anniversary on April 18th. My products are aging quietly in the time capsule that is my store.

Have you applied for any relief?
Yeah, but we didn't get anything. Nobody I know got anything. I don't know how they [the federal government] prioritized it, but if you look at the maps around the country, it seems that the red states and swing states got priority.

What’s your relationship like with other small business owners in the neighborhood?
I'm in constant contact with a group of small business owners, it turns out we’re all women, in Park Slope and Gowanus. We've banded together because individually we do not have much of a voice, but collectively, we make up 50 percent of the businesses in New York City. We built this city. The city you love, that's because of the small businesses. And each one of those small businesses is fighting their own battle because we are not a collective, so we are working on building one. We’ve joined forces via a multi-pronged campaign, We Built This NYC, to get more attention and advocate for relief. We just put out a call to arms on social media. We want to create awareness in the greater community so that people understand what’s at stake, which is the loss of the flavor of New York. The scales have tipped so hard toward corporate America that it's hard to be a quirky store and stake out a foothold because the expenses are too great. And this pandemic is bringing all that into very clear relief. It's so obvious now that only the very strong will survive, and those tend to be the ones with corporate backing. 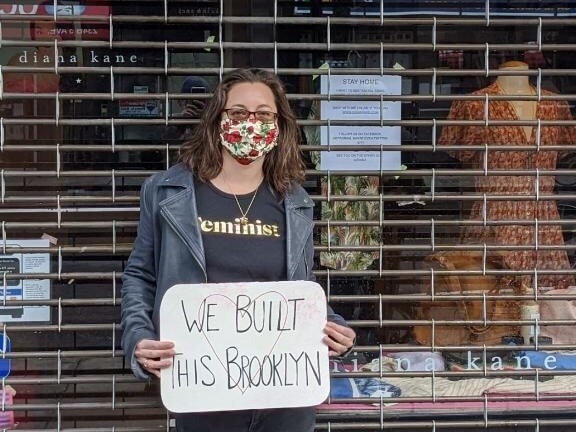 
Do you see overlap between the feminist community of Brooklyn and the small business community?
Absolutely. I recognize that I'm in a bubble, but I do think that when we talk about the mom and pops, a lot of them are the moms. The women that I'm in communication with are in female-centric industries: they own day spas, Pilates studios, hair salons, doula [networks]. These businesses also tend to be micro-businesses, meaning they have under 10 employees. Part of the problem from a political standpoint is the definition of small business, at least in this package [the Paycheck Protection Program]. The relief package includes businesses that have up to 500 employees at a single location, and that does not reflect New York City's small businesses. I appreciate Danny Meyer giving back the $10 million that Shake Shack got, but that's a publicly traded company. How the heck are they applying for and receiving small business relief?

How are you keeping in contact with your regulars?
Social media more than anything right now. I haven't been doing as much as I should, but it's coming back. Initially, I was like, People are dying, and I'm trying to sell you a dress? It didn't feel good, so I really didn't do it. I am at the point where my business will fail altogether if I don't, so a survival instinct is kicking in.

Well, understandably. I think your initial impulse not to hawk a dress was right...
[Laughs] Capitalism is rough. It’s just not ideal. It needs regulation and support systems so that we can be responsible adults in the way we interact with the world. We [small businesses] still want to be here, but we also want to make sure that the energy is going to the essential places when it's needed. So that’s my focus.