The source for shopping decisions, impulses, and inspiration
Photography by Frances Thomas
The Goods

There’s something you should know about me, right off the bat: I don’t like festivals. No matter the variety—music, food, book, et al.—festivals evoke a social anxiety that is eerily reminiscent of how high school dances and “college-to-career” networking events made me feel. It’s the countless strangers bumping into each other; the maze-like floorplan of vendors, stages, and live performances; the implicit expectation that you will forge new friendships, brand loyalties, and Instagram followers.

So when I was tasked with reporting on The New York Coffee Festival, I was, quite honestly, not thrilled. But I went. And, reluctantly, I had fun. Here’s what happened.

I took it easy on my usual caffeine intake, pouring just one mug to get me through the morning. I usually buy half a pound of pre-ground beans from Porto Rico Importing Co. every couple weeks. Yes, you heard that right, coffee snobs: I take those beautifully bright, sweet yet tart semi-washed Rwanda beans and I get them pre-ground, so they can sit and hemorrhage flavor in my kitchen cabinet for days on end. And it gets better: I top off my mug with whatever non-dairy milk is currently trending at Trader Joe’s (right now it’s the almond, cashew, and macadamia blend) and a hefty spoonful of agave syrup. Delicious.

The festival started at 11 on the first day, but I wanted to be fashionably late. One o’clock rolled around. It was time. 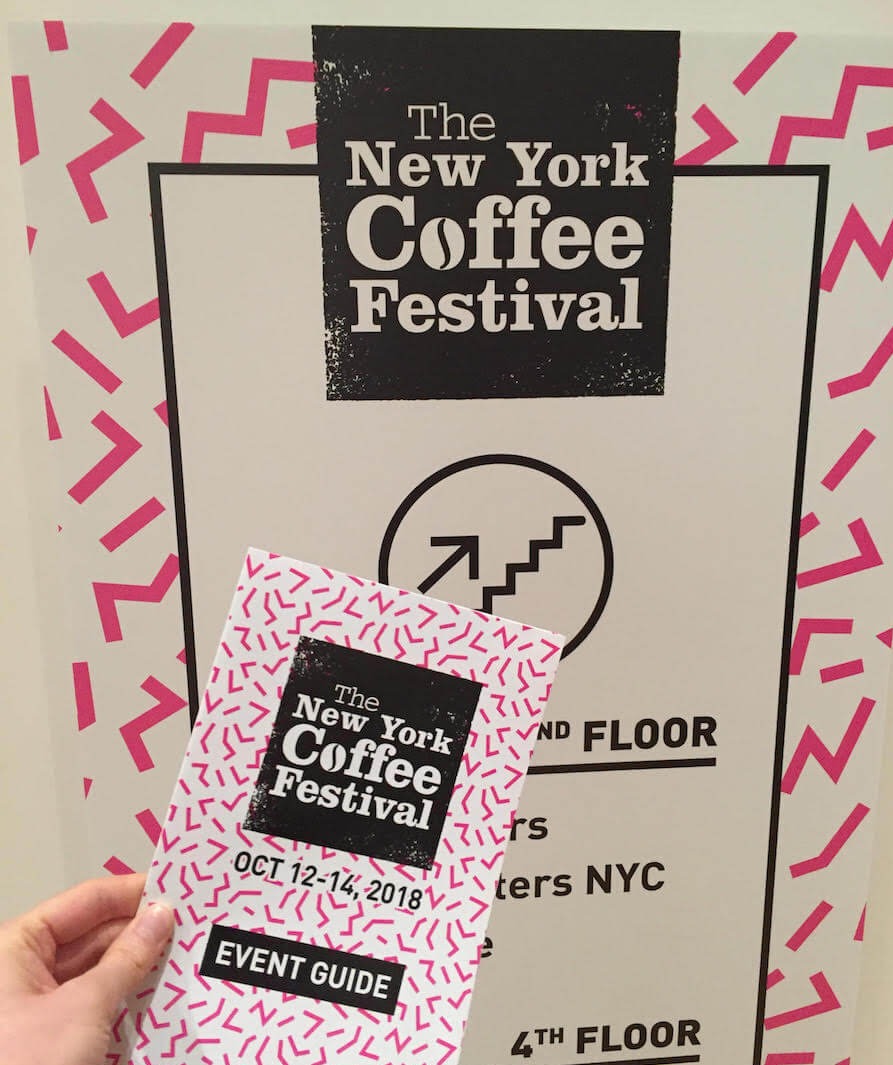 I got to the venue around 1:30 and was surprised by the lack of a line. Day one was the trade-only day, and I guess industry professionals aren’t in the business of fashionable lateness.

The festival took up three entire floors of the Metropolitan Pavilion, each ascending floor becoming increasingly niche. The first floor had live latté art, a stage with musical performances (of the ambient acoustic variety, with the occasional Joni Mitchell cover—aka hipster white noise), and dozens of local coffee shops serving up unlimited cappuccinos, lattés, cold brews, and pour overs. The second floor hosted The Coffee Masters, the competition wherein baristas from all over the world compete for a $5,000 cash prize and the prestigious title of “New York Coffee Master.” Beside the battlefield, there was a walk-up bar for tasting different hand-brewed coffees from roasters across the globe. The final floor was home to “The Lab,” a stage for interactive demonstrations, workshops, and seminars from industry experts and brand reps, plus a sensory experience to trigger all five senses and home in on your unique flavor preferences (the line was crazy-long all weekend, so regrettably, I have no new insights on my taste buds).

My immediate impulse was to hide out in a corner and scan the event map to make a systematized itinerary. But in the interest of “pushing myself beyond my comfort zone,” I started (tentatively) wandering.

Over at the latté art station, a handlebar-mustachioed gentleman was regaling a rapt audience of other handlebar-mustachioed men with accounts of his quest to draw a turkey with coffee foam. He mastered it after a year of daily efforts. The secret, he said, was “patience.” Heed the advice, harried New Yorkers: there will be no turkeys floating on your lattés until you learn to chill.

Inspired by his platitudinal monologue, I set forth into the pandemonium. There were countless vendors that, looking back at the event guide, I certainly should have recognized. But remember my introduction? Crowds freak me out. I circled the first floor maybe two dozen times before landing on Toby’s Estate, a shop I definitely know and definitely like. I ordered a cappuccino. There was no visible sugar—and certainly no agave syrup—and I was too embarrassed to ask for it.

So there I was, nearly an hour into the festival, sipping my first coffee. It’s the journey, not the destination, right? Buoyed by the jolt of caffeine, I brazenly volunteered to partake in the carnival game at the Toby’s Estate booth. Modeled after the classic ball and bucket toss, the game had players toss rubber rings into a barrel of coffee beans dotted with upright portafilters. Against literally all odds, I won. (Another thing you should know about me: I don’t throw, toss, kick, or pitch. My worst marks throughout grade school were in gym class.) The oh-so-underwhelming prize? A hot pink koozie advertising “Toby’s Summer Brew.” Seeing as it’s mid-October, I can only assume they needed to purge outdated inventory. 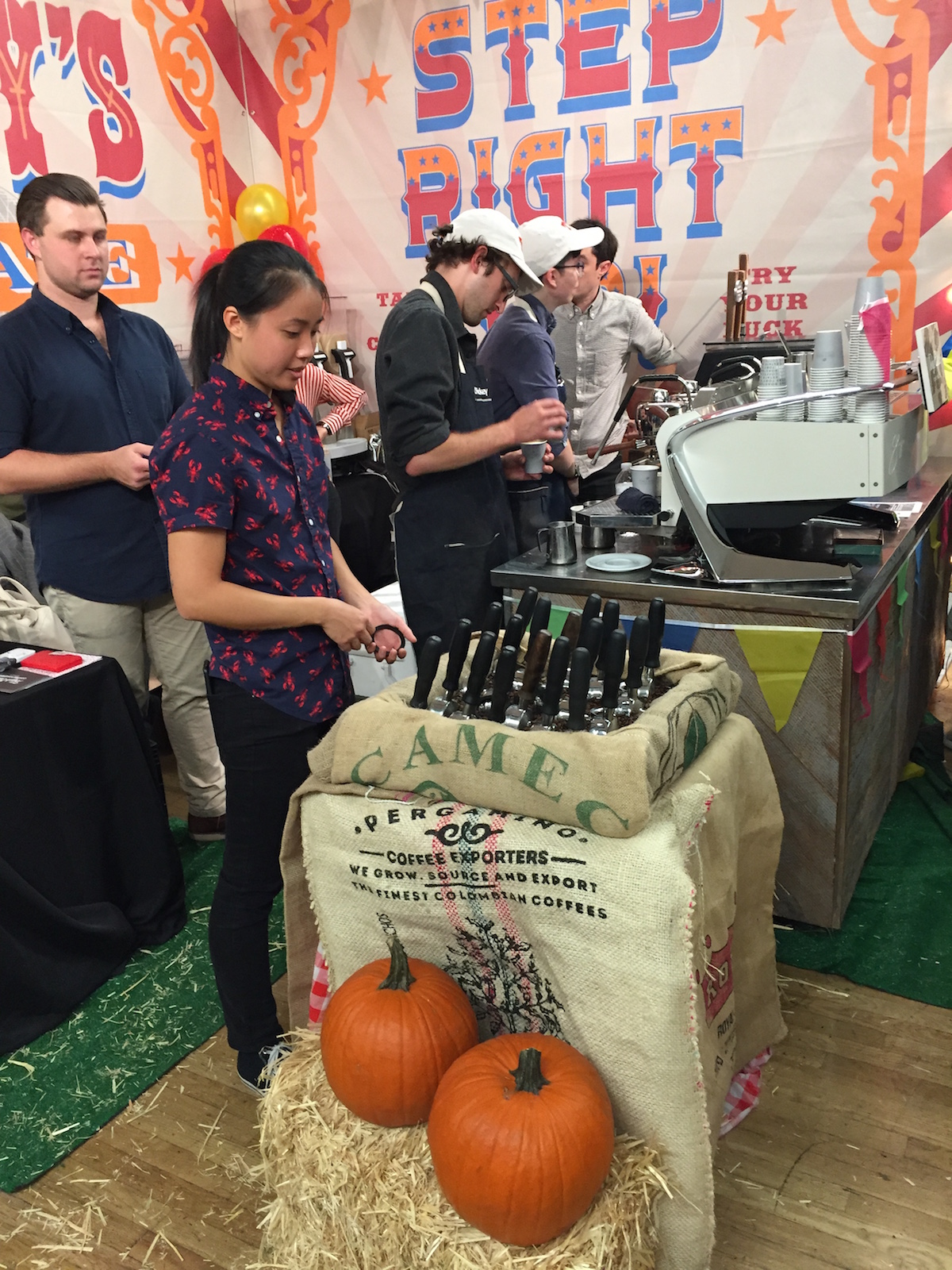 Lame prize aside, I was flying high. It could have been the cappuccino. Who cares? Soldiering up to the second floor, I laid eyes on another game hosted by Gotham Coffee Roasters, this time a spin-the-wheel. The woman in front of me won a pound of coffee, but since they were out, they let her pick between a tote bag, a t-shirt, a mug, and a baseball cap. Then it was my time to shine. I landed on—drum roll, please—a box of matches. Matches! They give those out for free. Oh well.

I spent the rest of the afternoon watching baristas from around the world battle it out for the title of New York Coffee Master. The challenges were pretty insane: one gave competitors just three minutes to taste five different cups and locate their origin—while blindfolded. The craziest display was probably from Anthony Knauf of Black Sheep London. He mixed a coffee cocktail inspired by “a massive night out in New York that started with whiskey and pickle juice shots, then ended with me stuffing my face with a salted beef bagel.” His creation married Hudson Baby Bourbon with super strong espresso, ice cubes, and a jus made from marinated beef, all topped with a bite-sized pickle and beef bagel for garnish.

I left day one buzzed, proud of my athletic prowess, and craving a bagel.

Since day two was open to the public, I got there early, assuming it would be crazier. Indeed it was. The same industry insiders were there, identifiable by their flannels, skinny jeans, and, yes, handlebar moustaches, but now they were joined by gaggles of college kids, families, and tourists. I’m sure there were others, as well, but it’s the Instagramming millennials, the baby stroller-wielders, and the Midwesterners asking how close it is to Times Square that always stand out.

I was determined to get more facetime with the vendors this time around. I walked up to the Chameleon Cold Brew booth. “Hey! You guys are from Austin, right?” I asked, as if I hadn’t just Googled them. “I’m from Jersey,” the unenthused associate deadpanned back to me. I moved on.

Over at Parlor Coffee, I started chatting with a friendly barista who made me a delicious cappuccino with the company’s signature blend. A sweet older woman—I’ll put her in my oh-so-reductive “Midwestern Tourist” bucket—came up and, motioning to the six different coffees on display from all over the world, asked, “so what’s the difference between all these?” I watched the barista, who just moments before had been a pinnacle of affability, swallow a groan. With veiled disdain she replied, “Well, lots. For starters, this one’s from Mexico, while this is from Kenya…” 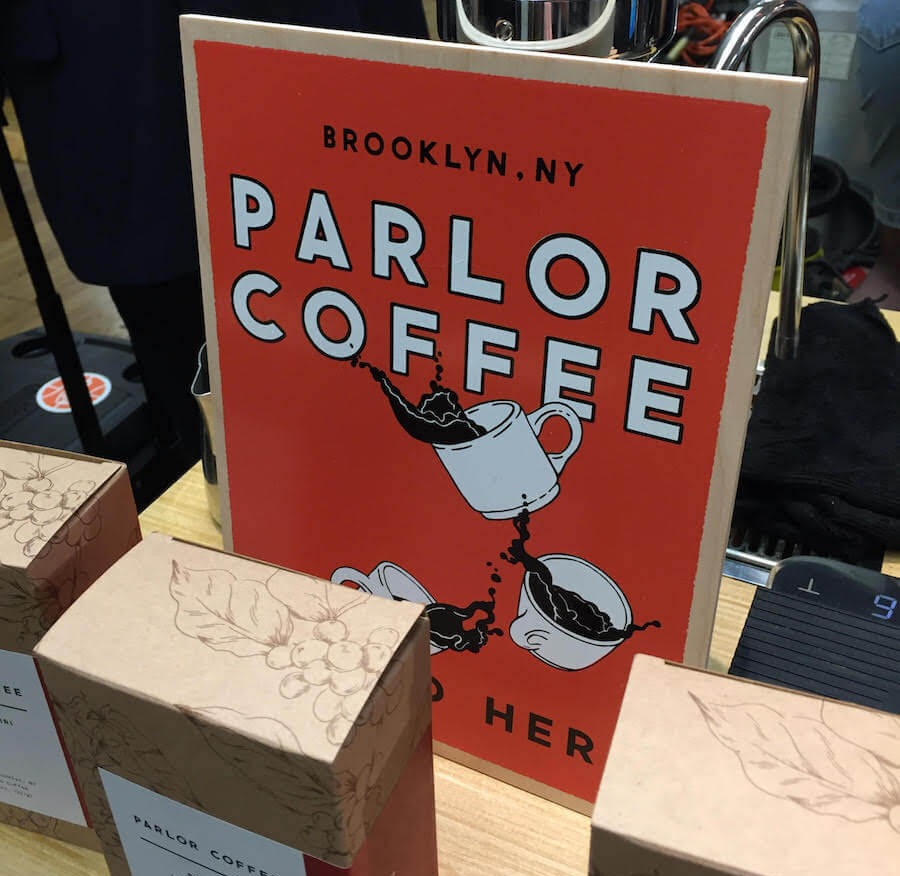 The tension was too much, so I headed upstairs. Lo and behold: Azuca, a new water-soluble technology for ingesting CBD. I picked the brain of Eben Freeman, the company’s executive product director, while sipping on a 10mg dose of the syrup with lemonade. Clad in a white lab coat and glasses, Freeman told me, “I wanted to make a simple syrup that could be substituted for any syrup used in cocktails. Our syrup has virtually no taste, so you don’t have to work around any CBD flavor when adding it to your drinks.” I can attest: all I tasted was tangy pink lemonade. I debated mixing it with coffee from one of the countless vendors downstairs, but opted to let that single dose sit for a while. Call me the poster child of restraint.

Itching for a kick of something, but not wanting to neutralize the effects of the CBD, I went on the hunt for something a little less caffeinated. There were countless stands promoting dairy alternatives, but Silk caught my eye with a tray of edible gold-dusted lattés. (I’m a sucker for shiny things.) The made-for-Instagram concoction was a blend of earl grey, soymilk, and yellow chartreuse—just what the doctor ordered. 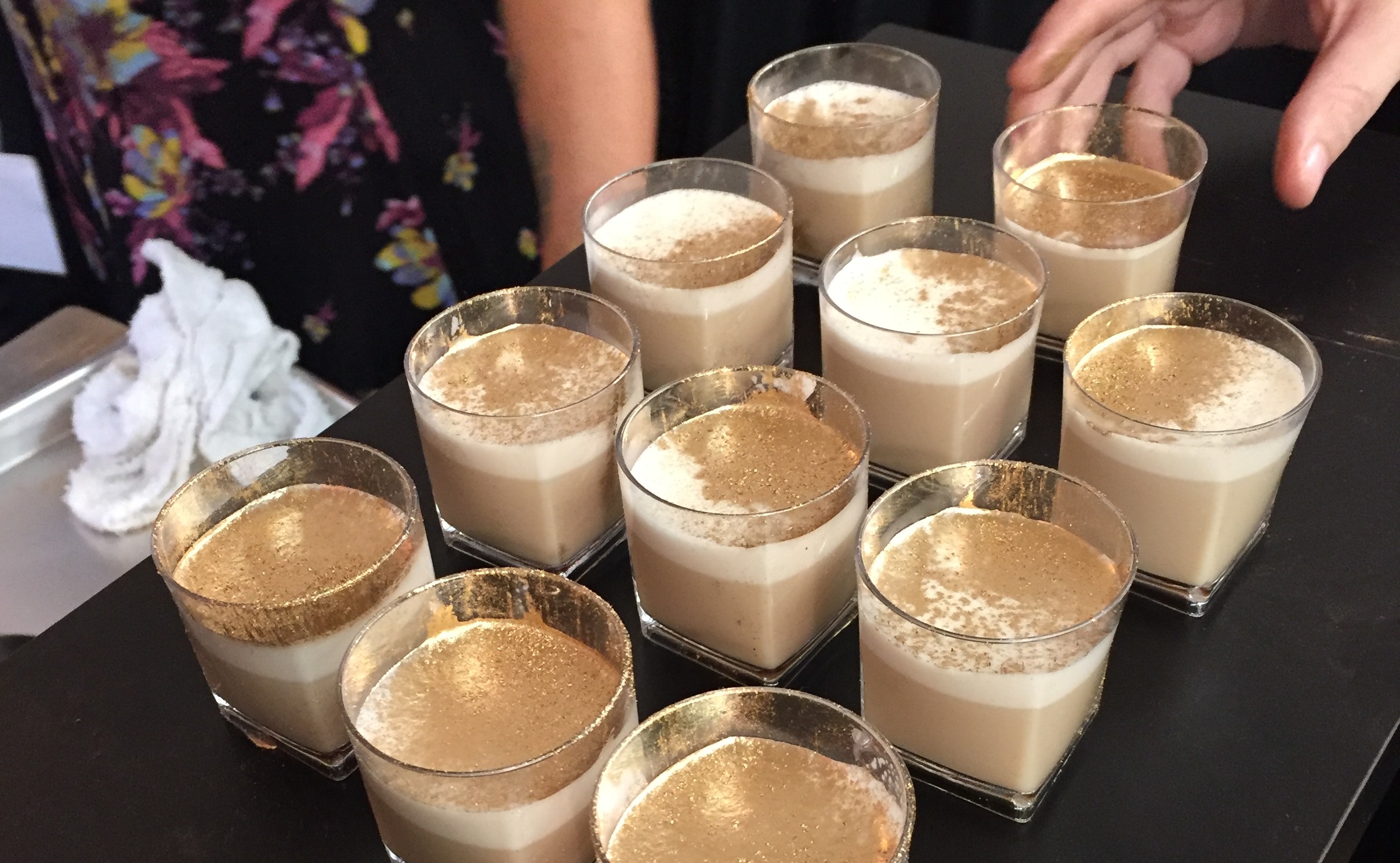 Not ready to leave the alternative dairy train, I headed to Oatly, where I was pleasantly surprised by the nice froth and salty kick of the oat milk. You bet that’ll be my next trendy non-dairy milk purchase.

I was approaching caffeine/milk/fake milk overdrive, but before heading out I walked through The Coffee Art Project, a small gallery of coffee-themed art that donates profits to Project Waterfall. I voted for my favorite piece, an illustration of coffee shops on Google Maps, then went over to the food section for a snack. Moments later, a volunteer tapped me on the shoulder: “Um, sorry to ask, but did you take my pen?” I looked down at my hand, and yes, I had taken her pen. Some people (me) just can’t handle coffee festivals.

I wish I could say that was my last (accidental) theft, but it wasn’t. Sitting at a bench eating a gluten-free brownie from The Good Batch, I eyed an ice bucket brimming with water. Water! What a revelation! Recognizing that my problem was dehydration, I downed a bottle before heading out. I made it almost to the door when, yet again, I felt a tap on my shoulder. A man in overalls said, “Excuse me, miss, but those waters aren’t free. Do you have $2 in cash?” Of course I didn’t. I spent my last dollar bills on that brownie. Humiliated, I offered to go get him cash from an ATM, but he had just packed up and a truck was waiting for him to leave. “I’m so sorry,” I said.

I practically skipped home, bouncing from the caffeine and shaken from my concerning new tendency toward kleptomania. Hopefully next year I’ll remember to hydrate.