The source for shopping decisions, impulses, and inspiration
Kristen, Jeff, and their puppy, Gus, in the shop / Photography by Kristen Howard
Shopkeepers

COVID-19 #SmallBizSpotlight | To save their business, the owners of Uncle Funkys Boards are making tough calls. Published: May 05, 2020


Happy Cinco de Mayo! It’s bizarre to imagine how I usually spend this day (on a patio with friends and copious amounts of guac) vs. how I’ll be spending it tonight (on my couch watching Better Call Saul with takeout tacos). I’m not mad about tonight’s plans, it’s just… Guac hits differently with a crowd.

Onto this week’s #SmallBizSpotlight, where I speak with Kristen Howard of Uncle Funkys Boards. Howard and her husband, Jeff Gaites, have helmed the beloved West Village skate shop for over a decade, first out of their apartment and now in the 650-square-foot basement of a hair salon. Once a little-known mecca for the city’s longboarders, Uncle Funkys has grown into a veritable destination spot, with an expanded inventory, a glowing writeup in The New York Times, and a devoted fan base including pro skateboarders, celebrities, and local kids.

But buzz only goes so far when it comes to a pandemic: After closing their doors in March, Howard and Gaites are scrambling to pay their bills with no revenue for the foreseeable future. Below, my conversation with Howard on the ineffable value of brick-and-mortar, the sacrifices she and Gaites are making to save their business, and why “even in the worst of times, a skateboard is a wonderful thing to have.”


The following interview has been lightly edited for clarity.


Let’s pretend the pandemic isn’t happening, just for a moment: What does it feel like to walk inside Uncle Funkys?
We're a relationships-based business. We are all about welcoming people in and not being intimidating the way that skate shops historically are. Because of our reputation as being welcoming, we attract an incredibly diverse clientele. All the way from complete beginners, people who never imagined that they would ever skateboard, to super advanced pro skateboarders. We see a lot of kids starting to skate, also women in their 40s and 50s. We’re turning the notion of what a skater looks like on its head.

When did you close your doors?
We closed on March 20th, two days before every [non-essential business in NY] was supposed to close, because we were nervous. Jeff is normally in the shop seven days a week, so he was coming in contact with so many people. And I'm immunocompromised: I have an autoimmune disorder called Behcet’s Disease, and I'm also a cancer survivor. So the whole notion of getting sick from a virus because of my immune system is a very sensitive topic for us. I’m usually in the shop two days a week, but I’ve been in isolation in my apartment since March 10th.

Do you have any employees?
We do. We have a part-time employee, Pete. The 19th was his last day of work. We're still investigating what makes the most sense for him. Right now we have not been paying him so that he can be eligible for unemployment. If we eventually apply for the Paycheck Protection Program, then we would probably back pay him for this entire time. Full disclosure, I'm not totally sure how all of that works… We're unsure about taking out anything that is a loan with interest. Our understanding is some of those [small business relief] loans are forgivable, but without that guarantee, taking on any debt makes us nervous.

Are you able to sell boards remotely?
We initially attempted to take phone orders, but it just didn't work. We had always planned to launch ecommerce in November of this year, and we still have that plan, but we aren’t ready for it right now. So we tried [phone orders] for a minute, but then our local post office on Hudson Street closed. Once that happened, it wasn't going to be as simple as me creating the labels at home and Jeff dropping them off at the post office. We were starting to feel like we were putting our local UPS guy, Ralph, at risk [by asking him to ship for us]. So we decided to shut the whole thing down.

How are you making it work right now with no sales coming in?
We are scrambling. We are planning to have a discussion [about rent] with our landlord who we have a very good relationship with, and we're hopeful that he will be understanding of our circumstances. And because of the CARES Act, business owners are eligible for unemployment, so Jeff has applied for it, and I am still in the process. I cannot get through on the website. I keep getting kicked off. It's so frustrating.


We're trying to scrape together whatever money we have.


Our hope is to be able to cover our overhead until we can reopen again. I had put down $4,000 for a third cycle of egg freezing, and I called that in. I thought, "Well, I'm not going to do it right now," or maybe ever… We need that money to pay for rent and health insurance. I had also set aside a budget for a short film that I was going to make, and now we're using some of that money for our expenses. We're trying to scrape together whatever money we have.

Do you feel like there is adequate support coming from the government to navigate this?
Not really. We were initially hoping that Cuomo would do a rent and mortgage freeze, but we’re starting to lose hope. It doesn't seem like he’s made any decisions that would be at all detrimental to the banks, and a rent and mortgage freeze would mean they wouldn’t get paid. I’m pretty cynical about this stuff. When they did the $2.5 trillion Wall Street bailout and then the only programs they offered to small businesses were bank loans with interest, it felt like they weren't understanding the reality for small business owners. We have spent the last 10 years working our way out of debt, and we still have some debt. The notion of taking out loans with interest is not sustainable for us. Sure, we wouldn't close right now, but then with insurmountable debt and less sales, we would end up having to close right after we reopen.

How do you feel about the prospect of reopening?
The moment we closed, I realized how much it meant to me to have the store open. We put something positive into the universe, and having to shut the doors was like, "Wow." When we think about reopening, we've already started to talk about [safety precautions]. Will we automatically reopen when they say we can? Will we only allow one group in at a time, creating a socially distanced line outside? We haven't made any decisions yet, because we’ll need to see what the status of the pandemic is at that time. We’re also talking a lot about diversifying revenue streams, making sure we get ecommerce going so if something like this happens again in the future, we would have a platform for online sales. 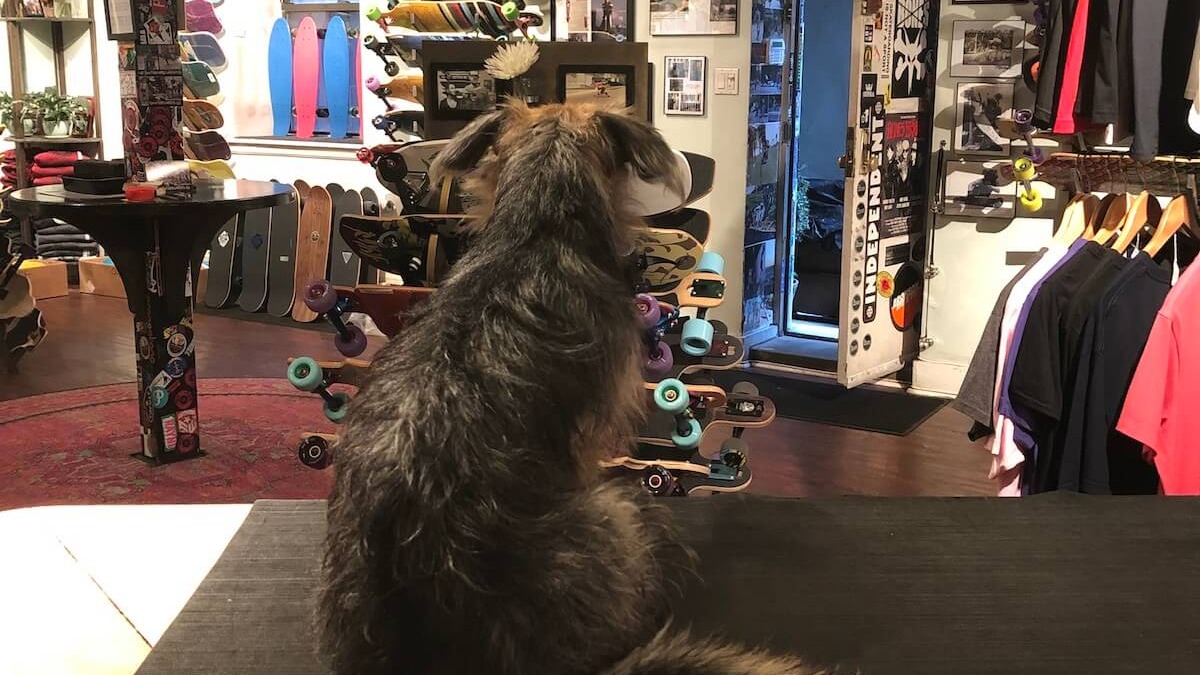 Do you think the demand for skateboards will still be strong once things open up, considering the impending recession?
I do, actually. We opened in 2009 during a recession, and we discovered that even in the worst of times, a skateboard is a wonderful thing to have. Skateboarding gives you a lot of freedom. It is of course a luxury item, but it is also an environmentally conscious way to travel, a way to get physical fitness, and it’s also nice for clearing your mind. It can be a solitary experience. It can be something you do with friends.