COVID-19 #SmallBizSpotlight | How The Slipper Room is trying to make it to the other side. Published: September 15, 2020


One of my favorite nights of all time went down at The Slipper Room, a cult-favorite burlesque and variety club in the Lower East Side. Since 1999, it has been overturning stereotypes about striptease performance art, proving that it can be smart, funny, and athletic — in addition to, of course, sexy. This week, I interviewed the club’s founder and owner, James Habacker, about how it’s surviving the pandemic. Keep reading for our conversation.


Pre-COVID, what kind of atmosphere did you strive to conjure in the theater?
The biggest feedback we get from people is, they can't believe how much fun it is. How free and open and inclusive it is. The other thing we hear is that the shows are much more professional [than people expect]... Burlesque has this reputation that all it takes is a couple of people taking their clothes off in some hole in the wall in Brooklyn and then you call it a burlesque show. But The Slipper Room is at the opposite end of that spectrum. A lot of our performers work on Broadway or with Cirque du Soleil and travel the world. It surprises people how high end it is. There'll be some nudity, but it's all comedy-based. Even though it's sexy, it's still funny, and I think that's our biggest strength.

How big is your staff?
As far as the running The Slipper Room and the bar, there's about a dozen of us. And they're all laid off right now, but I think that most of them will come back. The staff loves it here, and we love them. As far as performers go, I have a list of about 150 performers who I'll book throughout the year. Some of them are based here and ready to perform with us several times a month, and others are making their money mostly on cruise ships and we'll get them when they're in town. And then there's a whole other extended network of performers from around the world — London and Rome and Berlin — who reach out to me when they come to town. I don't know how long before all that will come back.

What happened to the club in the early days of the pandemic?
Our attitude was that we were just going to keep going. I had already gotten corona in early February. It came through The Slipper Room early because we're a tourist destination. Many of us got sick. Although we have a wide demographic of people who come to see the shows, most of our audience is young and healthy and we felt as though we would keep going and people would come. But obviously it didn't go that way, [because the state] shut us down. March 15 was our last show. And they don't know when we can reopen. You read in the papers [that] they're fighting for restaurants to be able to open, but it seems as though theaters and bars are considered an absolute last priority. It's shocking to me that this is New York City and the arts are considered so disposable. You have all these young artists who are really dedicated to their craft, who are making their living as independent contractors, and there's no support network for them. It's terrible.

I saw on Instagram that you were selling drinks to go — is that ongoing?
We never officially did that. There were a few weekends where we had some drinks on the street, mostly as a morale booster. It was to bring the performers together, because a lot of us hadn't seen each other for months. But we don't have any outdoor space because we're a second floor location and we don't serve food because we don't have a kitchen — we're a theater. So we're not in a position to be able to do anything on the street legally. And the city is discouraging the idea of doing any performance on the street because they don't want people to congregate.

What was it like to host those few unofficial reunions?
It was wonderful to see people again. It's a very tight-knit community. We've always had a “no diva” policy [at The Slipper Room]: no matter how talented you are, we won't book you if you’re a diva. So everybody who performs is very down to earth and supportive and loving. It was really nice to be able to catch up with people. My social life is completely tied up with my work life, so it's very strange for me right now. For the past 20-something years I've been performing three, sometimes four nights a week. I've never really taken a break from it, so it's very strange not to be on stage anymore.

In what capacity do you perform?
I MC the shows. I have a couple of different characters that I perform as, primarily Mel Frye, who's like an old Borscht Belt comedian. 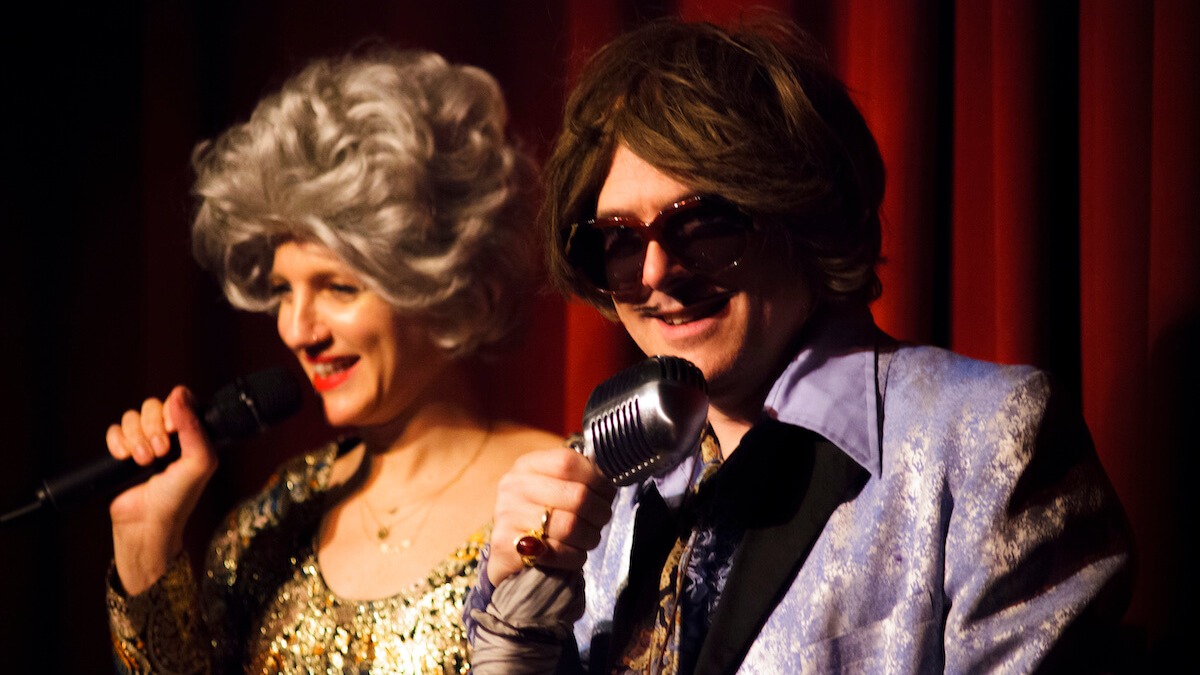 
You produced some virtual shows — what was that process like?
We decided to do them prerecorded instead of live. We did 13 shows — one for each of the MCs at The Slipper Room. And we allowed the MC to choose the performers they wanted to work with. We had a nice run with that. Towards the end, the protests [in the wake of George Floyd’s death] started and between those and the warmer weather, we felt like the timing was off. We're talking about resuming when the weather gets cold. It was very enjoyable putting a show together. I did one along with my wife, Camille, and it was a lot of fun. [Editorial note: The shows are still available for viewing online.]

How did you alter the performances for digital viewing?
The big thing that I do [as an MC] is a lot of interaction with the audience, working the room. So there was none of that. But in addition to running The Slipper Room and hosting there, I'm also a filmmaker, so it was fairly easy for me to write a script that my wife Camille and I could do. It's very different from the stage stuff, and we did that intentionally, because I'm not a fan of theater on video — it just doesn't appeal to me. To avoid the pitfalls of that, we leaned towards something with more of a narrative, almost in the vein of a '50s TV show like Burns and Allen. The performers really amazed me. What they came up with, these brilliant little three minute vignettes; some of them are art house films in and of themselves. It was really lovely to see people get creative with it, shooting with their phones. I think it's helped a lot of people develop another skillset.

The events were technically free, but did you ask for donations?
Yes, we have a Venmo. Any money that's donated is split between the performers in the show. Basically, we accept tips for them.

How are you doing from a financial standpoint?
Well, thank God that we have a wonderful landlord who understands the situation and is working with us. Because we haven't had any income since March, and if we had to be paying our rent right now, we'd end up going out of business. We're hanging in there. I have no idea how long it's going to be before the city allows us to reopen, but I'm hoping that my landlord's not going to change his mind at a certain point. It's been very difficult financially. I have a daughter who's just starting college and I'm definitely feeling it.


There's a complete lack of appreciation for how we benefit the culture. We're lumped in as though we might as well be Scores.


Have you applied for any emergency funding?
The city offered some loans but they disqualified us because of the content of our shows, which I thought was very short-sighted on their part. There's a complete lack of appreciation for how we benefit the culture. We're lumped in as though we might as well be Scores. We did get a PPP loan, but that loan is designed specifically for paying our staff who are full time employees, and they're all furloughed. The government has no clue how small businesses operate or what our needs are and has done a terrible job of helping us. I'm amazed by how little care there is for the arts in New York. The truth comes out. I think it's true in America in general, and the pandemic has shown that and it's a shame. Although I do think that there's enough of us left who live for [art] and we're going to keep doing it no matter what.

How do you think this crisis will impact your community in the long run?
It's going to take a long time for things to come back to what we considered normal pre-pandemic. I can't imagine how long it's going to be before we see tourists in New York. My performers are now scattered around the country. How many of them are going to come back? I don't know. But The Slipper Room has been reinventing itself non-stop for 20 years and it will continue to do that. When we can open again, I'm going to reach out to all the performers. Some of them will jump at the chance [to] put shows on right away and others are going to hang back. I have every faith in this town, but it's going to take a while before it's booming again. And maybe that's not all bad. I grew up here downtown in the 1980s and we were all scrounging for subway fare, but it was a lot of fun. There was a freedom to it. I look at my daughter who's in art school now, and I think, Maybe it'll be like it was for me to some extent. Whatever it'll be, it'll be interesting.